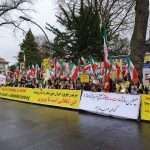 Written by Esmail Mohades on December 27, 2019. Posted in NEWS 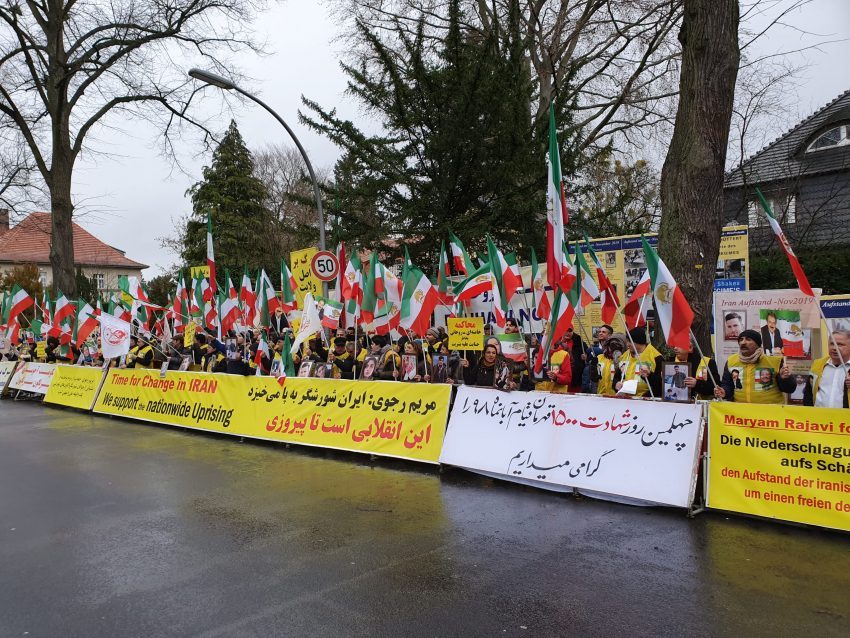 MEK supporters rally opposite the Iranian regime’s embassy in Berlin in solidarity with Iran protests and in condemnation of the massacre of more than 1500 protesters in a matter of few days during the November uprising in Iran-December 26, 2019

Supporters of the People’s Mojahedin Organization of Iran (PMOI/MEK) rallied in several cities around Europe on Thursday, December 26, to mark the 40th-day after the martyrdom of more than 1,500 protesters who were slain by the Iranian regime’s repressive forces, during the November 2019 nationwide protests.

In Berlin, the representative office of the National Council of Resistance of Iran (NCRI) in Germany held a demonstration in front of the Iranian regime’s Embassy in Berlin. The rally was in solidarity with the pre-announced gatherings in different cities in Iran, to commemorate the 40th day after their martyrdom, and occasion the families of the victims had chosen to gather to express their outrage against the injustice, and the inhumane murder of their loved ones.

The notorious Ministry of Intelligence had threatened the families of the victims not to hold any ceremonies. Many families were arrested and an informal martial law was imposed on all cities across the country. Internet and mobile services were shut down in many cities in order to prevent the news of the gatherings and the violent crackdown by the plain cloth, and Basiji mercenaries from the international communities.

In the demonstration in Berlin, Javad Dabiran from the National Council of Resistance of Iran condemned the heavy military and security measures in various cities, and the arbitrary detention of the Iran protesters, especially the arrest of the relatives of those killed during the November uprising. He said the massacre of demonstrators during the November uprising by the security forces and IRGC forces were a clear case of crimes against humanity and requires a rapid response of the international community, especially the Western countries.

Demonstrators called on the German government to formally condemn the bloody repression of November protests by the Iranian regime, as a case of “crimes against humanity”. They also called on the German government to take an initiative to send a fact-finding commission from the European Union and the United Nations to research the crackdown on November insurrection and its victims. The Commission must travel to Iran and visit prisons and thousands of detained protesters who are subject to torture.

The 40th Day Memorial for victims of the #IranProtests, #MEK supporters in France demonstrate against the regime’s crackdown https://t.co/ZXcDl8mVrF#FreeAllProtesters #Internet4Iran @USAdarFarsi @AmnestyIran

A similar demonstration was held in Trocadero Square in Paris, France on Thursday, December 26, 2019. Supporters of the MEK held banners expressing their solidarity and support for the Iran Protests for regime change in Iran. Reuters news agency reporting on the event, wrote: “Dozens of Iranian opposition protesters gathered at the Trocadero square in Paris on Thursday against the recent crackdown by Tehran on protests in the country.”