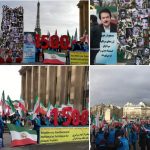 The 40th Day Memorial for victims of the Iran Protests, MEK supporters in France demonstrate against the regime’s crackdown

Written by Mohsen Aboutalebi on December 27, 2019. Posted in NEWS 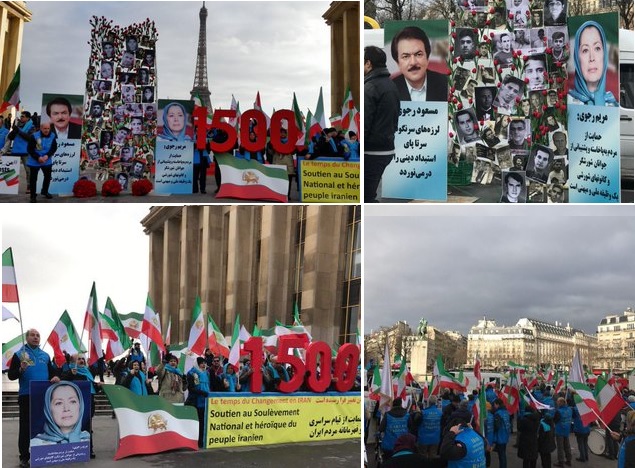 Supporters of MEK demonstrated in Paris in solidarity with the victims of the violent crackdown by the religious fascism ruling Iran on November uprising- December 26, 2019

The clerical regime, in fear of another uprising on the 40th day memorial of the victims of the November uprising, shut down the internet and mobilized all of its suppressive forces, including the IRGC, the State Security Force, the Bassij, plainclothes and intelligence ministry agents, all across Iranian cities in a desperate effort to prevent the ceremonies honoring the victims. On December 26, 2019, the Secretariat of the National Council of Resistance of Iran (NCRI) released a statement in this regard.

“In some cities such as Karaj and Shiraz, the regime deployed helicopter surveillance. Elsewhere, like Orumiyeh, snipers took positions on rooftops,”… “Nevertheless, in many cities such as Karaj, Shahriar, Isfahan, Sari, Mashhad, Shiraz, Behbahan, Orumiyeh and Yazdan-Shahr, people gathered at the martyrs’ graves and pledged to uphold their ideals and continue their path. They also staged gatherings in streets or squares, chanting anti-regime slogans.” Reads the NCRI statement.

The crackdown on the 40th Day Memorial for the Victims was condemned by the international community and the Iranians abroad.

December 26 – Paris
Freedom loving Iranians & PMOI/MEK supporters holding a ceremony in memory of civilians killed by the mullahs' regime during the November uprising in #Iran.#IranProtests pic.twitter.com/jjeB2ih2c6

“The Iranian people have the right to mourn 1500 victims slaughtered by Khamenei during Iran Protests. The regime fears its own citizens, and has once again resorted to violence and shutting down the internet.” The US Secretary of State, Mike Pompeo twitted.

On December 26, 2019, the Washington Post had a piece about the crackdown.

“Pouya Bakhtiari died 40 days ago Thursday, shot in the head, his family says, during the anti-government demonstrations that briefly swept through Iran in mid-November. His family wanted to honor the 26-year-old in accordance with Shiite tradition, marking the 40th day of mourning with a commemoration,” reads the piece adding:

“That seemingly simple tribute led to the arrest of Bakhtiari family members this week, according to Iranian media and human rights groups. On Thursday, Iran limited Internet and phone services in some major cities and put security forces on high alert for protests — or even unsanctioned acts of honoring the dead.”

The supports of Iran’s main opposition group the People’s Mojahedin Organization of Iran (PMOI-MEK) staged a demonstration in Paris.

“Dozens of Iranian opposition protesters gathered at the Trocadero square in Paris on Thursday against the recent crackdown by Tehran on protests in the country,” Reuters reported on December 27, 2019, adding:

“Iran’s authorities have restricted mobile internet access in several provinces, an Iranian news agency reported on Wednesday, a day before new protests were expected to kick-off following calls for demonstrations on social media.”