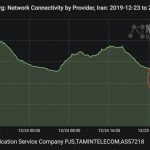 Written by Esmail Mohades on December 25, 2019. Posted in NEWS 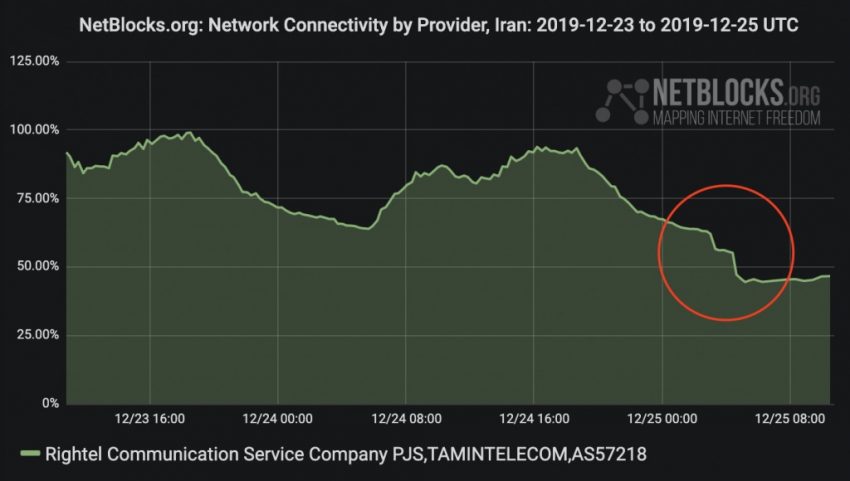 NetBlocks confirms that the Internet access in Iran has been lowered at least by 50% ahead of December 26, pre-announced Iran Protests. Iran cuts out the Internet in order to freely suppress the protesters.

On Wednesday, December 25, 2019, the Iranian regime shut down mobile internet access to overseas sites in several provinces, a day before the 40th day of since the protesters were killed all across Iranian cities.

The regime’s ILNA news agency quoted an informed source at the Communications and Information Technology Ministry as saying the shutdown was ordered by “security authorities” and covered the Alborz, Kurdestan and Zanjan provinces in central and western Iran and Fars in the south. The same Ministry announced that more provinces will be affected by the shutdown.

In Iran, people mourn their dead on the 40th day of their passing in large gatherings.  In the past few days, new protests have been called on social media. The Iranian regime is dreadfully attempting to prevent any memorial ceremonies or gatherings planned for these days and has threatened the families of the victims not to observe these days. The regime’s security forces have been arresting and intimidating the victims’ families.

“The ministry of intelligence is nevertheless terrified of allowing the families to hold any memorials for the victims and has arrested the parents of Pouya Bakhtiari in recent days. The family had been threatened by authorities not to hold any memorial for their slain son.” NCRI reported.

The NCRI statement also emphasized that “The massacre of 1500 protesters, torture and killing of prisoners are examples of crimes against humanity and the international community must act to stop it. This bloody regime must be isolated from the community of nations,”

Mrs. Maryam Rajavi, the President-elect of the National Council of Resistance of Iran (NCRI), has called on the United Nations to send an international fact-finding mission to visit the prisons and meet with the detained in Iran without any delay.

The names of 601 martyrs of the nationwide uprising released- Crime against humanity, begun with the November uprising, continues with arbitrary arrests, torturing prisoners, keeping families in the dark about the fate of their children #IranProtestshttps://t.co/R4HoUdP1Cr pic.twitter.com/7dqblL2EnA

In the NCRI statement, the People’s Mojahedin Organization of Iran (PMOI/MEK) announced,