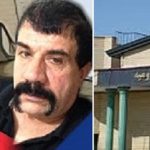 MEK-Iran: Urgent calls for political prisoners in Iran to be released

Ibrahim Khalil Sedighi Hamedani and his son Salar have been sentenced to 30 years of prison on bogus charges. The criminal regime has also charged them with being affiliated with the MEK. The father and his son are on hunger strike

The Iranian Opposition (The National Council of Resistance of Iran- NCRI) has called on the UN Secretary-General, UN High Commissioner for Human Rights, UN Human Rights Council (UNHRC) and related UN rapporteurs, Amnesty International and all other human rights organizations to take efforts to ensure that all political prisoners in Iran are freed.

It especially wants action taken so that two political prisoners currently on hunger strike can be released.

The two political prisoners in question are Ibrahim Khalil Sedighi Hamedani and his son Salar. They are currently on a hunger strike since Wednesday 25th September after being sentenced to 19 years imprisonment each.

The plight of political prisoners continues in #Iran's dungeons.#HumanRightshttps://t.co/4ctCoSdqPQ

The two men are in Urmia Central Prison in the north-western part of the country.

The health of the two men is of major concern. After twenty days on hunger strike, their blood pressure has dropped to a worrying level and they are exhausted. The father and son have written to the clinic to inform staff that they would no longer be accepting blood pressure tests to be carried out on them.

The official in charge of the jail and the prison warden met with Ibrahim Khalil and his son. They made a number of promises to the men, with the aim of getting them to end their hunger strike, but they failed to follow up and ultimately ignored their concerns.

They have said that they will continue their hunger strike for as long as their demands are not met.

Ibrahim Khalil and his son were accused of being affiliated with the Mujahedin-e Khalq (MEK) The ruling against them is ludicrous and the main opposition to the Iranian regime has raised its concern.

The National Council of Resistance of Iran (NCRI), in a statement, said: “Messrs Ebrahim Sadeqi Hamedani, 60 years old, and his 22-year-old son, Salar Sadeqi Hamedani, went on hunger strike in protest to inhuman treatment and medieval sentences of the mullahs’ regime against them since September 25, 2019”. The NCRI urges the relevant authorities and organizations to urgently establish a fact-finding mission to see how political prisoners in Iran are treated.

The organization emphasizes that the mission must include participation on an international level and political prisoners must be interviewed.

Political prisoners in Iran have been horribly treated for many decades. Dissidents and political opponents are still being arrested, tortured and thrown in jail, simply because they do not agree with the despotic rule of the mullahs.

One of the most violent and shocking events in recent decades is the 1988 massacre in which the country’s Supreme Leader issued a fatwa calling for the execution of political prisoners across the country. It was a truly tragic crime against humanity in which more than 30,000 political prisoners lost their lives, most of whom, were members and sympathizers of the people’s Mojahedin Organization of Iran (PMOI, Mujahedin-e Khalq or MEK).

During the course of summer 1988, the #Iranian regime executed more than 30,000 political prisoners – most of whom were supporters or members of the People’s #Mojahedin Organization of #Iran (#PMOI / #MEK)https://t.co/oTOZAZvVTr pic.twitter.com/k4b8QXfgi4

There are renewed calls for justice for the victims of this massacre because the regime is still basking in impunity all these decades later. And worse, some of the officials involved in the 1988 massacre of the MEK members, are now occupying high-level government positions.