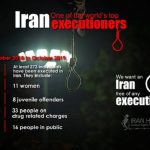 Written by Mohsen Aboutalebi on October 14, 2019. Posted in NEWS 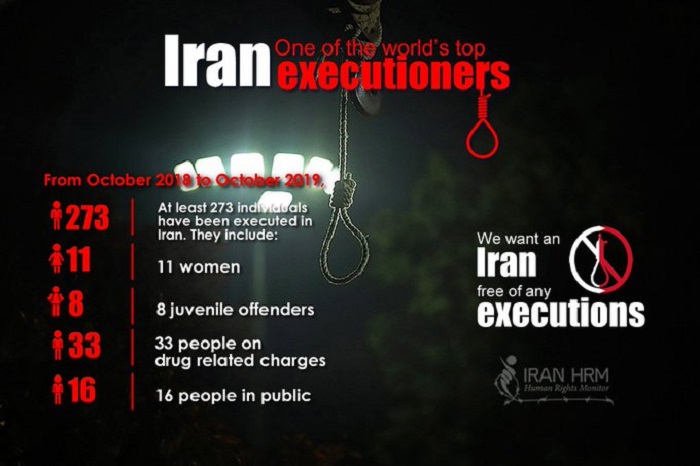 Execution figures in Iran between Oct 2018-19

October 10 is World Day against the Death Penalty, so around that time, it’s important to think about the thousands of death row prisoners in Iran. Iran is the world record holder in executions per capita, the highest executioner of juveniles, and a major executioner of political prisoners.

Iran’s use of capital punishment is a regular source of international outrage, attracting the attention of the UN Special Rapporteur on Human Rights in Iran and Amnesty International as well as many others. It is not just the mullahs’ refusal to ban the death penalty or the sheer number of executions, but also the fact that the regime uses execution uses as a tool to suppress the Iranian people.

The regime also refuses to categorize murders according to a degree, which means that anyone committing murder is sentenced to death, regardless of motive. This means that many victims of domestic abuse and those who kill another in self-defense are executed as if they acted in cold blood.

Iran Human Rights Monitor (Iran HRM) reported that between October 2018 and October 2019, there were at least 273 executions in Iran, including:

In March, supreme leader Ali Khamenei appointed Ebrahim Raisi, a notorious former judge, as head of the judiciary, likely because of his role in the 1988 massacre of 30,000 political prisoners.

On the 30th anniversary of this unforgettable epic, let us rise and honor the memory of the 30,000 red roses of the Iranian Resistance massacred in 1988 by a minute-long applaud.#1988Massacre #Iran pic.twitter.com/coQraoCJaT

US State Department deputy spokesman Robert Palladino called Raisi’s appointment a “disgrace” and a “mockery of [the] legal process”.

“Ebrahim Raeesi (Raisi), involved in mass executions of political prisoners, was chosen to lead Iran’s judiciary. What a disgrace! The regime makes a mockery of the legal process by allowing unfair trials and inhumane prison conditions. Iranians deserve better!”

“[We urge] all international human rights organizations, especially the High Commissioner for Human Rights and the Special Rapporteur on the situation of human rights in Iran, journalists and the media, to condemn horrendous executions in Iran and take immediate action to stop these medieval crimes being carried out in the twenty-first century. We want an Iran, free of any executions.”