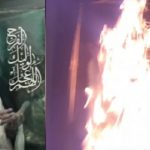 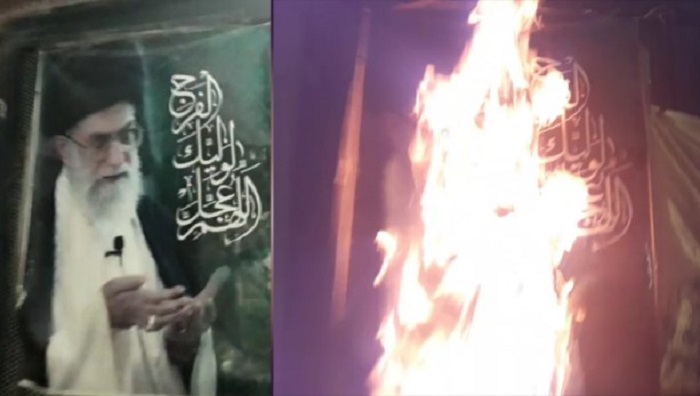 On the 39th anniversary of 27 September 1981, rebellious youths in Iran torched poster of mullahs’ regime’s founder and current Supreme Leader Ali Khamenei as well as Revolutionary Guards (IRGC) and Bassij forces’ bases across the county over the weekend.

The youths also posted pictures of the Iranian Resistance’s Leadership on walls and overpasses of different cities and signs with anti-government slogans such as Down with  Khamenei, Long live freedom and Democracy and Freedom with Maryam Rajavi.  These activities were carried out in cities such as Tehran, Tabriz, Shahr-e-Rey, Mashhad, Shiraz, Kermanshah, Orumiyeh, Ilam, Zahedan, Khoy, Ramsar, Omidiyeh, Chaboksar.

On September 27, 1981, the youths, supporters of the People’s Mujahedin Organization of Iran (PMOI/MEK) demonstrated chanting “Down with Khomeini” for the first time in central Tehran since 1979. Members of the IRGC opened fire to the crowd killing hundreds and arresting many more. The detainees were executed on the same day or the days that followed. The MEK has published names of 1142 fallen martyrs of the September 27th.

After that fateful day, a new chapter opened in Iran’s history. One that was marked by a people standing to a back warded regime that was trying to impose its will on a proud nation. The Iranian Resistance leader Masoud Rajavi tried very hard to stop violence and bloodshed from happing in Iran in two years prior to June 20th, 1981. A day that the IRGC opened fire indiscriminately on 500000 unarmed demonstrators which turned up on MEK’s call filling the streets of downtown Tehran in the afternoon.

Khomeini’s mind was set on ruling with the idea of Velayat-e Faqih (absolute rule of clerics). Such thinking left no room for democracy and freedom. Rajavi highlighted the importance of individual freedoms and presented the Iranian people with an alternative to an obsolete doctrine represented by the mullahs. Therefore, September 27 marked the first attempt by the MEK to show the people that Khomeini’s regime has no tolerance for dialog and must go. Khomeini, Khamenei and their likes responded with an iron fist and filled the prisons with freedom fighters. Thousands were executed and they showed no mercy even to underage children or pregnant women.

MEK had no chose but to resist and stand up for its people, and they did. It took the rest of the world some four decades to realize the true nature of the mullahs’ regime. A wake-up call came in 2016 when Mrs. Maryam Rajavi President-elect of the National Council of Resistance of Iran (NCRI) started the Justice Movement campaign for fallen heroes of the 1988 massacre of a political prisoner in Iran. Later that year Grant Ayatollah Hossein-Ali Montazeri’s son released an audiotape of his late father speaking to a four-member “Death Commission” tasked by Khomeini to cleans 30000 political prisoners. Then many human rights organizations reacted. Amnesty International as the most prominent human rights organization took the lead in publishing a number of eye-opening reports on the gruesome 1988 massacre. Finally, the curtains were dropped on curtly of the mullahs’ regime. It is by no means the end of the road. According to Amnesty, 1988 events, amount to a crime against humanity and therefore does not expire and all perpetrators must stand trial before an international criminal court. Khamenei and his cronies have no escape from justice. It is only a matter of time.