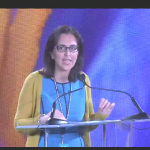 Ramesh Sepehrrad; In a free Iran only the ballot box determines the legitimacy of the future government 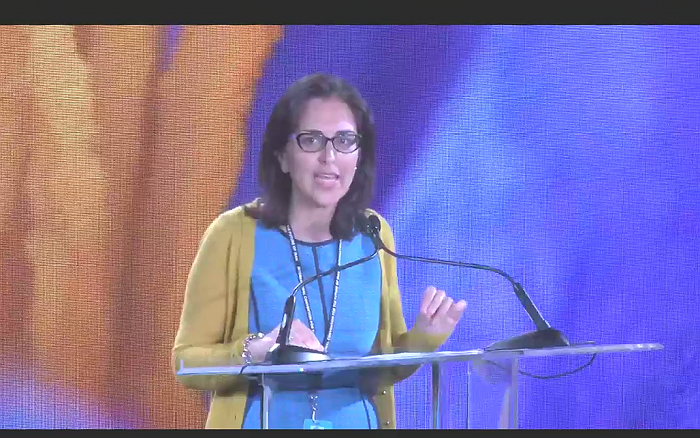 Dr. Ramesh Sepehrrad, from OIAC delivering a speech to the New York Conference discussing the future of Iran-September 24, 2019

Dr. Ramesh Sepehrrad, from OIAC, delivered a speech that was warmly receipted by the audience. Below please find an excerpt of her speech:

Dr.Sepehrrad-OIAC rep:1979 revolution is #Iran’s historic rejection of Monarchy.The 2009&2018 uprising was the defiance of the regime in its entirety. We're not seeking a return 2the past. Demarcation W/Shah’s dictatorship &religious despotism is our red line #IranConferenceNYC pic.twitter.com/jDywBGn926

“It is my privilege and honor to speak to you on behalf of the Organization of Iranian- American Community who for more than twenty-five years has been primarily focusing on echoing the voice of the Iranian people as their struggle for human rights and democracy in our native land Iran.

Over the last century Iran has seen two brutal dictatorships, under the Pahlavi’s monarchy which in collaboration with the mullahs worked against the democratic and nationalistic government of Dr. Mosaddeq and now dealing with the misogynist regime since 1979, the religious fascist of mullahs who are incapable of reform or even engaging in a meaningful way with the Iranian people or for the rest of the world for that matter.

What has to be very clear is that the Iranian people’s rejection of both monarchy and mullahcracy is based on historic lessons from their struggle for freedom and democracy over the last several decades. This is not a partisan preference; it is simply the reality of Iran’s recent history. The 1979 revolution is Iran’s historic rejection of monarchy. While the mullahs have high jacked the revolution, the waves of the popular uprising in rejection of the mullahs during the 1980s, 1990s and most notably the 2009 and 2018 are the ongoing rejection of this regime in its entirety.

People of Iran, are not making any distinction between so-called reformers and hardliners, so why should we? This red line has been drawn by the blood and sacrifices of more than 120,000 martyrs for freedom in order to move Iran away from despotism of the past and religious tyranny of present. Therefore, it is our red-line too and crossing of this red-line under whatever pretext, is unacceptable, because it is undermining the true democracy movement in Iran.

The international community has not yet recognized the depth and extent of the ongoing crimes against the people of Iran, especially, the 1988 massacre of political prisoners. In our view, just as the Mayor (Giuliani) said Khamenei, Rouhani, Zarif, Qasem Soleimani, Ebrahim Raisi after four decades of execution and oppression, war, terrorism, subversion, mayhem by the terrorist IRGC and Ministry of Intelligence are all international criminals and must stand trial in the international tribunals and courts.

All of us gathered here agree that the Iranian regime is the enemy of not just the Iranian people but also the rest of the world. We agree that this regime must go. We also agree that it is up to Iranian people and their organized opposition movement, who shall and will bring this regime down in its entirety. We have also gathered here to emphasize the path forward for free Iran. OIAC stands for a non-nuclear, democratic, secular, Republic of Iran based on the following key principals:

Dr.Sepehrrad-OIAC rep:We will not let this regime colonize us any longer to ruin our national integrity.If anyone has any doubt that we can do this,I invite them 2look into the #MEK,where all ethnics have come together in their struggle against this regime.#IranConferenceNYC

In a free Iran, women will have all their rights to choose their clothing, and any exploitation of women on whatever pretext will be rejected.

In a free Iran, we would have a commitment to the universal declaration of human rights and all international covenants.

In a free Iran, the death penalty will be abolished; no more political prisoners, no more prisoners of conscience, and they will be released after the downfall of this regime.

The path to progress and prosperity in a free Iran is based on the followings:

So at this point, I’ll ask all delegates to think a moment, and envision an Iran based on these principals, and the path to recovery, an Iran that is worthy of our heritage, our history and the sacrifices made to date. Together, we must refrain from divisiveness. We need to aim all of our energies and efforts to change this regime first.

In 2002 the head of the National Council of Resistance of Iran, Massoud Rajavi announced the NCRI’s plan for promoting the national solidarity front to encompass all Iranians and political entities who reject the monarchy and the system of Velayat-e Faqih and our campaigning for a democratic independent and secular republic to come together. This call was faced with overwhelming misinformation and disinformation campaign by regime cronies and MOIS agents.

For too long, the Iranian regime’s lobbyists and apologists have worked to divide us by propagating falsehood and smear campaigns, lies and propaganda. This must stop. We must put an end to the disinformation campaign and the echo chamber against the MEK and the NCRI. We will end this.

This regime-change movement inside Iran is growing stronger day by day, because of the MEK’s resistance units and their ongoing efforts that are expanding to organize the public. We can do the same in exile, this means we need to be entirely focused on the threat of the Iranian regime and the need to overthrow this regime with all the factions within this regime. We need not be distracted by the regime’s ongoing propaganda as we push for further isolation of the regime, to provide support for regime change by Iranians. We must demonstrate political maturity and commitment to these principals and be fully committed to them, which can guarantee an enduring and effective unity against this regime. I’m hopeful that we will get there in solidarity which did not begin today, it has been going on for the last 40 years because of the National Council of Resistance of Iran.”