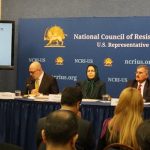 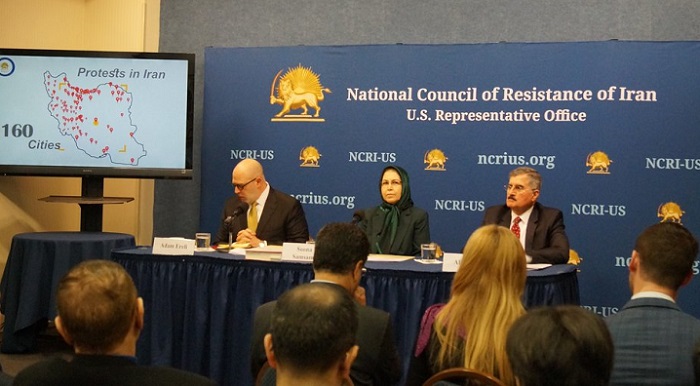 On Monday, February 11th, the United States Representative Office of the National Council of Resistance of Iran (NCRI-US) held a panel discussion on the Iranian regime’s forty-year record of domestic human rights violations and foreign terrorist activities. The event was held at the National Press Club in Washington, D.C.

The panel, which was led by Soona Samsami, the NCRI representative in the United States, included a discussion of the current unrest and economic crisis in Iran and the current impact of the massive popular uprising that took place one year ago, the resumption of U.S. sanctions, and the start of a firm policy toward the regime. The panel also discussed Iran’s future and possible policies toward Iran that could be adopted this year.

The 40th Anniversary of the Islamic Revolution

The panel coincided with the 40th anniversary of the overthrow of the Shah. On February 11, 1979, the people of Iran rose up and took down the Shah’s monarchy. The MEK played a key role at the end of this dictatorship and hoped to establish a free Iran. However, Ruhollah Khomeini and a group of hard-line clerics seized control of the country and created the theocratic regime that exists in Iran today.

Over the past forty years, the mullahs’ regime has been responsible for a number of conflicts in the region and has oppressed its own people. The MEK defended the liberties obtained after the 1979 revolution and showed extraordinary discipline to prevent an early confrontation with the new dictatorship, despite many of its followers and supporters were beaten, arrested, tortured and murdered by regime’s club wielders and the IRGC (Islamic Revolutionary Guard Corps) forces.

The panel discussion included several distinguished speakers, including NCRI-US Representative Soona Samsami, former U.S. Ambassador and former Principal Deputy Assistant Secretary of State Adam Ereli, and President of the Near East Policy Research (NEPR) Ali Safevi.  They shared their thoughts about the threat posed by the Iranian regime, the MEK and the democratic alternative for Iran’s future, and the need for a firm policy toward the mullahs. The following are some highlights from the day’s event:

Soona Samsami of NCRI on Prospects for Change in Iran https://t.co/mCQFpDsUPS "In contrast to the regime's attempts to paint a picture of strength on its 40th year in power, in reality it is at its weakest point in history." National Press Club, 11 Feb 2019 #OnThisDay #FreeIran