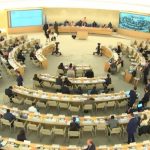 NGOs at the UN: Stop Violation of Human Rights in Iran 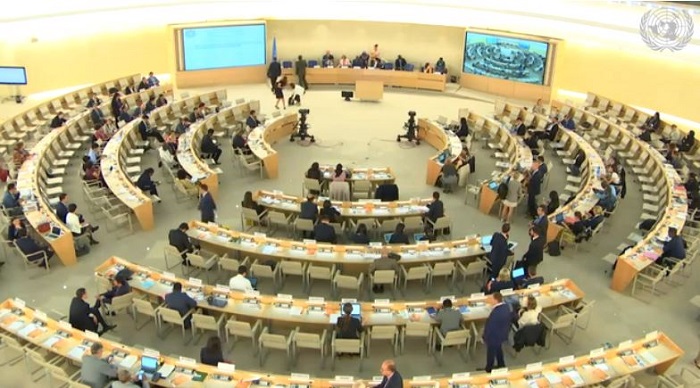 The 42nd session of the Human Rights Council is being held 9 – 27 September 2019 in Geneva. Once again the dire situation of human rights in Iran is the core concern of this session. In the General Debate, the 13th meeting, some NGOs discussed the issue.

The representative of the International Association for Women’s Equality said: “In Iran today, there is a tragic situation when it comes to the rights of women. Under the current President, the repression of women is unabated, quite revers, very many women have been executed over the past five years. ….. women are deprived of freedoms and are kept away from public and political life, but they are always protesting. All of these protests mean that women are suffering in this part of the world. We join those organizations that have condemned the death of a female football fan that set herself on fire in front of Parliament. Many civil rights militants, women journalists, trade unionist have been sentenced to lashes and long prison sentences up to ten years for having defended the rights of workers and new individuals have been sentenced to death for having protested against the death penalty. We call on UNHCR to denounce this pressure which is unbearable for women in Iran.”

Another NGO, Women’s Human Rights International Association, expressed its concern about the worsening situation of human rights in Iran, saying:

“During the three months of Summer 2019, the Iranian government executed around 100 people including 6 women. In this way, we can see that the Iranian authorities have not renounced the use of the death penalty and continue to use it at a high level. That is why Iran, remains the country that executed the most in the world in terms of its population. These executions sometimes involve prisoners sentenced to death for acts allegedly committed before the age of eighteen. In his last report the special rapporteur on the situation of human rights in Iran, Mr. Javaid Rehman wrote that he deeply regretted that the Islamic Republic of Iran continues to sentence children to death for more often than any other state. ….. the UNSG, Antonio Guterres, also stated that he was deeply disturbed by the number of juvenile offenders being executed in Iran. He called on the human rights Council to put more pressure on the Iranian government to abolish the death penalty.”

Sahar Sanaie reminded the report of the previous United Nations Special Rapporteur on the situation of Human Rights in Iran, the late Ms. Asmah Jahangir, saying: “Between July and August 1988, thousands of political prisoners, men, women, and  teenagers, were reportedly executed pursuant to a fatwa issued by the then Supreme Leader, Ayatollah Khomeini.”

Ms. Jahangir call for a comprehensive investigation into the 1988 massacre

In 2017, in her first address to the Third Committee of the United Nations General Assembly in New York, Ms. Asmah Jahangir called for a comprehensive and independent investigation into the massacre of political prisoners in 1988, mainly Mujahedin-e Khalq (PMOI/ MEK’)s members. She said, “the significant number of petitions, communications, and documentation related to the reported execution of thousands of political prisoners, men, women, and teenagers in 1988, speaks of a deep and unremitting pain that must be surely addressed. The killings themselves have been acknowledged by some at the highest levels of the State. Almost on a daily basis, I receive heartfelt letters from the relatives of those killed calling for answers. The families of the victims have a right to remedy, reparation, and the right to know about the truth of these events and the fate of the victims without risking reprisal.”

For decades, the MEK has asked the UN for a comprehensive and independent investigation into the massacre. The MEK reiterated that the perpetrators of this massacre must be held accountable.