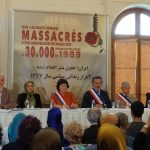 Maryam Rajavi: Regime Must Be Held Accountable for 1988 Massacre 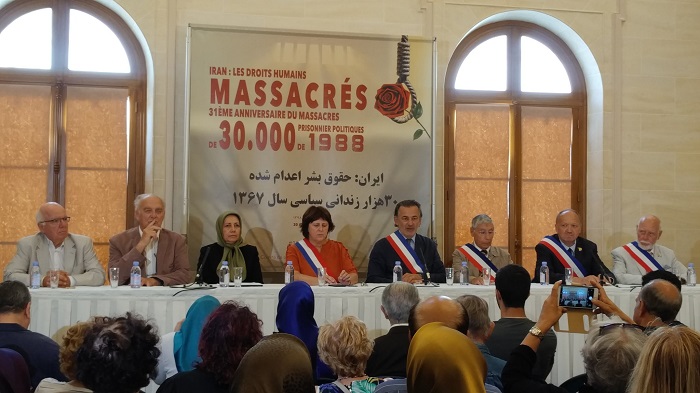 Mrs. Maryam Rajavi, President-elect of the National Council of Resistance of Iran (NCRI), delivered a message at the Paris District 1 City Hall on Friday at a conference entitled

Mrs. Rajavi’s speech focused on the international community’s failure to hold the regime accountable for its malign actions, including the 1988 Massacre. She argued that this policy of appeasement places the entire world at risk.

Mrs. Rajavi explained that the 1998 Massacre occurred as the result of a fatwa writing by regime founder Ruhollah Khomeini ordering the execution of all prisoners in Iran who remained loyal to the  MEK. Many of those who were executed had already completed their sentences, said Mrs. Rajavi.

Now, what is the solution and what is the proper approach to this regime? #1988Massacre #NoImpunity4Mullahs #InternationalDayoftheDisappeared #Iran https://t.co/FnzTnVG2Ro pic.twitter.com/oHHaBcrUSZ

“Khomeini’s death decree triggered a wave of killings in prisons across Iran to the extent that virtually no prisoner remained in any of the wards. But this was not enough for Khomeini. He ordered the re-arrest of throngs of PMOI [MEK] supporters who had been previously released from prison. These arrestees were also swiftly executed,” she added.

Thirty-one years later, the people responsible for this crime are among the highest-ranking officials within the regime. Former executioners now hold the positions of Head of the Judiciary and Minister of Justice, said Mrs. Rajavi.

“The regime also continues to refuse giving information on the victims of the 1988 massacre and the families of those massacred are still being persecuted. Despite the passage of 31 years, they still do not know where their loved ones are buried,” she said.

The regime continues to refuse giving information on the victims of the #1988Massacre and the families of those massacred are still being persecuted. Despite passage of 31 years, they still do not know where their loved ones are buried. #NoImpunity4Mullahs #EnforcedDisappearance pic.twitter.com/FGyECEioBc

“Just last month, Mostafa Pour Mohammadi, one of the key members of the Death Commissions carrying out the 1988 massacre, said, “The Mujahedin-e Khalq (PMOI/ MEK) have desecrated the (regime’s) image throughout the world… Now is the time to fight the PMOI… The PMOI/MEK is the most treacherous enemies of this nation and they must be dealt with one by one.”

Mrs. Rajavi said that the mullahs’ fear of being overthrown has driven their active pursuit of manslaughter and massacre. She pointed to last year’s foiled bombing attack of the annual Free Iran gathering in Villepinte, France, which led to the arrest of an Iranian regime diplomat and four mercenaries. They are all currently awaiting trial in Belgium.

“This incident proved that the regime is still pursuing Khomeini’s evil intentions and the policy of massacring their opponents,” she said.

“On the international level, this policy amounts to meddling in the region, warmongering, massacre of the people of Syria, attacks on oil tankers, jeopardizing the safety of international waters, terrorism, and hostage-taking,” Mrs. Rajavi added.

Mrs. Rajavi said that the Iranian regime must be dealt with by the Iranian people who seek to overthrow the dictatorship.

“The international community will also have to recognize the desire of the Iranian people and Resistance if they want to get rid of the epicenter of fundamentalism and terrorism in the world. They must not grant concessions to the mullahs,” she emphasized.

“These relations are not only morally reprehensible but are politically wrong because they encourage and embolden the mullahs in blackmailing, hostage-taking and terrorism. Then, in return for massive concessions granted by the West, they take only one step back. In this way, European governments are not only hurting themselves but are putting global peace and security at risk,” she explained.

Mrs. Rajavi stressed that the international community must investigate the 1988 Massacre as part of ending the policy of appeasement. She cited a December 2018 report about the 1988 Massacre by Amnesty International, which stated: “Iran is facing a crisis of impunity… The succession of atrocities in Iran is intractably linked to the impunity that has been enjoyed by the Iranian authorities.”

“The time has come for the international community to end three decades of impunity for the clerical regime’s leaders in accounting for their crimes,” said Mrs. Rajavi.

“Khamenei and other leaders of the Iranian regime must face justice for committing crimes against humanity,” Mrs. Rajavi said.

“And the world must recognize the Iranian people’s right to resist and fight for the overthrow of the ruling religious fascism,” she added.