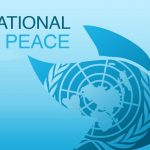 21st September, recognized as International Peace Day by the United Nations. International days are occasions to educate the public on issues of concern, to mobilize political will and resources to address global problems and to celebrate and reinforce the achievements of humanity. The International Days also serve as an indicator of the interest that a given subject attracts in each part of the world. Peace is a concept of societal friendship and harmony in the absence of hostility and violence. In a social sense, peace is commonly used to mean a lack of conflict and freedom from fear of violence between individuals or heterogeneous groups.

The most fatal threat to global peace

Humankind has suffered wars and violence for a long time and historically, peace has been its desire from the beginning. So many lives have perished during non-sense wars and conflicts. Nowadays, despite scattering wars here and there, terrorism is the main threat to global peace.

Along with suppression inside the country, terrorism and warmongering policy have been the main factors for its survival. It is worth mentioning that Iranian people in particular and the regional states, as well as the glob, have suffered its terrorism.

What is to be done?

“This is the battle of our lives and a race against time. We can win — and we must.”

There is no doubt that appeasing and compromising terrorists are not the solution, it has been proven times and again. For forty years, the Western Powers sought a moderate mullah; however, the more they sought, the less they found.

The recent missile and drone attack on Saudi Arabia’s oil industry by the terrorist regime of Iran once again showed that this regime is the source of terrorism and instability in the region and the world. The US Secretary of State, Mike Pompeo, called the attack “Act of War”.

Forty years of experience has proven that the only solution to terrorism is standing firm against the tyranny of terrorists. President-elect of National Council of Resistance, Mrs. Maryam Rajavi, in a response to the terrorist act of attacking Aramco oil facility in Saudi said that attack on a neighboring country’s oil installations was a major step and a new phase in the warmongering aggressions of the religious dictatorship ruling Iran, adding that exerting power and decisiveness is the only language the mullahs understand.

She added that inaction only emboldens this medieval regime, whose primary victims are the Iranian people, emphasizing that the ultimate solution to rid the world of Iran’s ruling religious fascism as the source of all crises in the region is a change of this illegitimate regime by the Iranian people and their organized resistance movement.

Paying tribute to the soles fallen for restoring peace in Iran, MEK members and all freedom-loving Iranians, in the anniversary of International Peace Day, we reiterate Madam Rajavi‘s remark that said: “I call on the people of the world to support the Iranian people’s resistance and uprising to overthrow despotism, religious discrimination, and a regime which is the central banker of terrorism and the enemy of peace and freedom in the region and the world.”