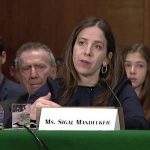 US Undersecretary of Terrorism and Financial Intelligence: “Iran is the World’s Leading State-Sponsor of Terrorism” 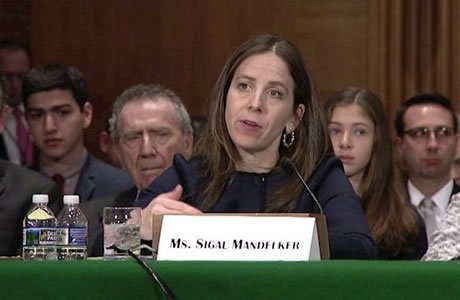 On March 12, Sigal Mandelker, U.S. Under Secretary for Terrorism and Financial in a hearing before the Intelligence,House Committee on Appropriations Subcommittee-March 12, 2019

On Tuesday, March 12, the US House Representative’s Committee on Appropriations Subcommittee heard comments as part of its hearing on Financial Services and General Government. In the hearing, the US Under Secretary for Terrorism and Financial Intelligence, Sigal Mandelker, broached the subject of the Iranian regime’s state-sponsored terrorism.

"We have made clear that those who engage in activities that run afoul of U.S. sanctions risk severe consequences, including losing access to the U.S. financial system and the ability to do business with the United States.”#Iranhttps://t.co/u24jOwIO9j

She told the committee, “Iran is the world’s leading state-sponsor of terrorism,” adding, “we are continuing to maximize economic pressure on the regime to combat its weapons proliferation, terrorism, and regionally destabilizing activities.”

She cited her department’s efforts to establish Strategic Impact Units (SIUs) dedicated to fighting the greatest threats to US stability as a central strategy of the Treasury’s Office of Terrorism and Financial Intelligence (TFI). The six impact units pertain to human rights and corruption, virtual currency, Iran, ISIS, Russia, and the North Korean threat.

These units work with experts to manage and tackle the individual threats in line with broader strategic and national interests.

Mandelker also outlined another TFI mechanism to combat the Iran threat. She said the TFI had established a fusion cell that would operate across all the other agencies to explore “new ways to take action against Iran and Iranian-backed illicit actors.”

The TFI has also made strides in its counterterrorism efforts. Its Terrorist Financing Targeting Center (TFTC) is working with other players in the Gulf, including the Gulf Cooperation Council (GCC), to combat the financing of terror.

A Coordinated US Response to the Iranian Threat

Mandelker’s remarks are part of a wider crackdown on the Iranian threat since Donald Trump entered the White House. Last November, economic sanctions were reintroduced against the Iranian regime, including regime-linked financial institutions and firms.

Its subsequent investigations have proven that the Iranian Central Bank has helped finance Assad’s regime in Syria, and the Hizballah and other terror groups. A US investigation also found that the Iranian regime has facilitated the transfer of millions of dollars to Russia in exchange for oil deliveries to Syria.

Mandelker offered some insight into where US sanctions would go next. “We are also targeting Iran’s use of its commercial aviation sector for illicit purposes,” she said. She singled out Mahan Air as one such provider.

Mahan Air has been accused of transporting Iranian IRGC and Quds forces weapons across the Middle East. “We are urging countries to deny landing rights to the airline,” Mandelker added.

Her comments come at an important time. The People’s Mujahedin Organisation of Iran (MEK) and its international allies have been calling on the European heads of state to sever economic ties with the Iranian regime. Mandelker echoed  What MEK has been warning about and described the risk associated with sustained business ties with the Iranian dictatorship.

“we have engaged extensively with European countries on the significant risks of launching a special purpose vehicle for a country that has repeatedly failed to adopt international AML/CFT safeguards,” she said.

She concluded, “We have made clear that those who engage in activities that run afoul of U.S. sanctions risk severe consequences, including losing access to the U.S. financial system and the ability to do business with the United States.” Europe would be well-placed to take note.