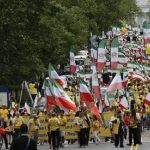 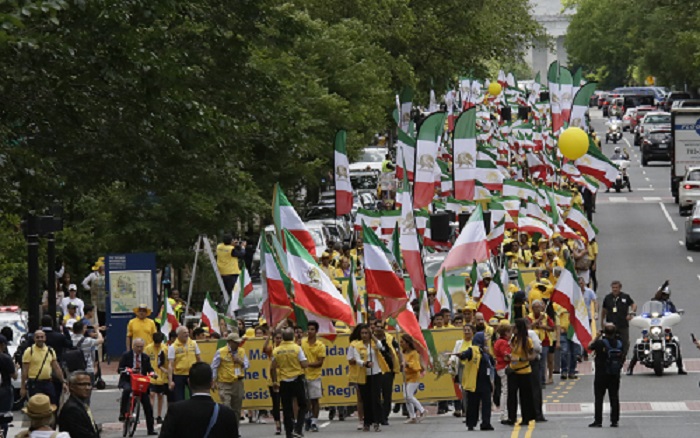 The Free Iran rally in Washington D.C, June 21, 2019- Over ten thousand Iranians took to the streets of Washington D.C to express support for the uprising in Iran and in support of the MEK.

September 6th marks the 54th anniversary of the MEK’s foundation. Over the course of its history, the MEK has dealt a series of crushing blows to the Iranian regime. The following are some of the organization’s greatest hits, according to the NCRI.

When the Shah was toppled on February 11, 1979, only the MEK dared to challenge Khomeini. While six million Iranians rushed to greet Khomeini in Tehran, Massoud Rajavi (the historical leader of the MEK) began giving speeches warning the people about the freedoms they would soon lose. For the first two years of Khomeini’s rule, the MEK held peaceful meetings, rallies, and protests, which were violently attacked by the regime’s suppressive forces. over 50 MEK activists were killed and thousands more were arrested while participating in these peaceful gatherings.

On June 20, 1981, the MEK held a massive rally in Tehran. 500,000 people were in attendance when Khomeini ordered his Revolutionary Guards to open fire on the peaceful protesters. Thousands were murdered since then. There was no doubt after that point that Khomeini was a brutal dictator.

Exposed the Global Threat Posed by the Iranian Regime

After Khomeini’s death, Western leaders embraced the policy of appeasement toward the mullahs, hoping that by doing so they could reap the benefits of doing business with the Iranian regime and avoid the threat to global stability posed by the regime. The MEK sought to expose the global threat posed by the Iranian regime and their state sponsorship of terrorism. Mrs. Maryam Rajavi has gained wide international support for the right of the Iranian people to overthrow their oppressors. And in 2019, the United States designated the Islamic Revolutionary Guards Corps (IRGC) as a terrorist organization after years of urging from the MEK.

In 2002, the NCRI exposed the regime’s secret nuclear program at a press conference in Washington, D.C. MEK intelligence inside Iran uncovered evidence of a uranium enrichment site at Natanz and a heavy-water reactor in Arak, triggering an investigation by the U.N. nuclear watchdog. The MEK and NCRI released details of numerous other illicit activities, which were subsequently confirmed by the U.N. The resulting sanctions are severe and ongoing.

The 1980-1988 Iran-Iraq War was prolonged long after Iraq withdrew its forces from Iran. The MEK, which had fought against the Iraqis since their invasion, saw no need for the war to continue after the withdrawal of forces and brokered a peace plan between the MEK and the Iraqi government. Khomeini rejected the plan, vowing to fight until Iraq or Iran were destroyed.

Khomeini was eventually persuaded to agree to a cease-fire..five years later.

Maryam Rajavi calls for formation of a movt to obtain justice for victims of #1988Massacre https://t.co/pAf9Gn25nd pic.twitter.com/nH9HPZFmU4

MEK’s Call for Justice for Victims of the 1988 Massacre

During the 1988 Massacre, while 30,000 political prisoners were being executed over the course of a single summer, Ayatollah Hossein-Ali Montazeri, Khomeini’s heir-apparent, spoke out against the executions. He described the massacre as the “greatest crime against humanity for which history will condemn us.” Khomeini dismissed him. Montazeri was later placed under house arrest, where he remained until his death. An audiotape was found in 2016 of Montazeri’s discussions with members of the 1988 Death Commissions. In the tapes, he expressed his dismay over the immorality of the executions. The discovery of the audiotapes, and prior to that Maryam Rajavi’s call for justice and various campaigns exposing the extent of the crime and its perpetrators led to further demands for investigations into the 1988 Massacre and justice for its victims.