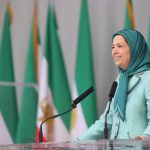 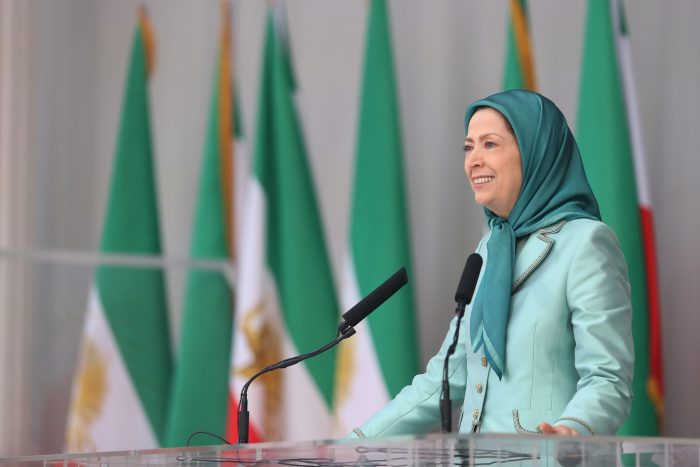 The President-elect Maryam Rajavi, speaking at Ashraf 3, on the occasion of the 54th anniversary of the founding of the People’s Mojahedin Organization of Iran (PMOI/MEK)- September 3, 2019

Friday will mark the 54th anniversary of the Mujahedin-e Khalq (MEK’s) founding. On Tuesday, Mrs. Maryam Rajavi, President-elect of the National Council of Resistance of Iran (NCRI), gave a speech at Ashraf-3 in honor of the occasion. Mrs. Rajavi honored the founders of the MEK—Mohammad Hanifnejad, Saeed Mohsen, and Asghar Badizadegan—as well as it is past and present leaders, and she recounted some of the organization’s history and the sacrifices made by its members. She also emphasized the importance of the goals of the MEK and assured those present that they are capable of leading Iran toward freedom and progress.

I want to assure the people of #Iran that the PMOI/MEK is capable of overthrowing the regime by relying on their people.They can replace religious tyranny with freedom, democracy, & separation of religion and state, leading Iran to freedom, prosperity & progress. #FreeIran #MEK54 pic.twitter.com/XjDPzgiXMa

The following are some of the highlights from her speech:

“The founders of the MEK stepped into a difficult and unfamiliar path, but they broke through the impasse by an admirable faith and confidence. They started everything anew, a professional struggle based on an ideology which rejected exploitation, and promoted sacrifice and selflessness,” Mrs. Rajavi said.

“Today, the great founder of the PMOI, Mohammad Hanifnejad, is watching us and is present among us. He can see that the seed he planted has now turned into a lush and blossoming jungle,” she continued.

Mrs. Rajavi spoke about how proud she was to be a member of an organization with progressive leadership and values.

“I am proud to be a member of an organization and a resistance movement led by Massoud Rajavi for five decades in a formidable struggle against two dictatorships, and towards progress and evolution,” she said.

Massoud-Rajavi, the historical leader of the Iranian Opposition.

“From the bottom of my heart, I am proud to be a member of an organization and a movement where women have been at the helm for over 30 years of its 54-year existence,” Mrs. Rajavi continued. “The Secretary-Generals leading the MEK in these years are my dear sisters: Fahimeh Arvani, Shahrzad Sadr, Mahvash Sepehri, Beheshteh Shadrou, Mojgan Parsaii, Sedigheh Hosseini, Zohreh Akhyani and Zahra Merrikhi. Every one of them has represented great values in the ranks of the organization. They have been symbols of sincerity and integrity, energy and vivacity, strength and firmness, leadership and resilience, selflessness, modesty and humility, accountability, truthfulness, steadfastness, patience, and triumph,” she added.

“The People Mojahedin Organization of Iran(PMOI/ MEK) is a treasure trove filled with the Iranian people’s historical steadfastness. And I assure you that this organization spearheads the Iranian society’s quest for liberation from tyranny, discrimination, and injustice, and it will realize the true aspirations of the people of Iran for a glorious future,” said Mrs. Rajavi.

“This has been the subject of the People Mojahedin Organization of IranPMOI’s 54-year struggle. It has been the goal of 120,000 of the best children of the people of Iran. This is what hundreds of thousands of political prisoners have been tortured and suffered for, and millions and millions of dissidents have endured its pain under oppression. The essence of the PMOI’s quest is freedom and equality,” she added.

“In contrast to the one-dimensional outlooks of various opposing schools of thought over the past two centuries, the PMOI set both freedom and equality as their goals. They have risen up for breaking the chains of repression, and for eliminating discrimination and injustice. The PMOI has made great sacrifices over the past 40 years in its struggle for freedom. The PMOI’s name is synonymous with the word “freedom.” At the same time, this is a movement determined to obliterate oppression and exploitation,” she emphasized.

Mrs. Rajavi described the mullahs’ history of corruption, beginning with the confiscation of all public property by Khomeini in 1979 and continuing to the present day.

“They have taken over public lands, forests, natural resources, waters, the environment, banks, the national money market, factories, public companies, the lion’s share of oil, gas and petrochemical revenues, communications, and the market of internet software,” she said.

Rajavi stressed that Khamenei’s corruption has led to “destitution, poverty, and homelessness” among the Iranian people.

“Today, the situation in Iran is so disastrous that people have to sell their kidneys; they have to sleep on the streets; women even sell their infants, and destitute women do not have any form of support. All honorable Iranians are deeply upset by such tragic conditions,” she said.

Mrs. Rajavi discussed the MEK’s commitment to democratic Islam and its rejection of “the mullahs’ abuse of Islam to gain power and wealth.”

“In the beginning, Mohammad Hanifnejad rejected those interpretations of Islam which advocated exploitation. He showed that Islam does not defend oppressive classes, but is on the side of the deprived and the oppressed,” she explained.

“A decade later, Massoud Rajavi underlined the threat posed by the reactionary religious outlooks, drew the line between the Islam which the PMOI believed in and the reactionary version which later seized power,” Mrs. Rajavi continued.

“The PMOI believes in the original faith introduced by Mohammad whose emancipating message rejected class oppression as well as racial and gender discrimination. It defends women’s equality and the autonomy of oppressed ethnic groups. It advocates people’s sovereignty and does not accept any form of coercion and compulsion,” she added. 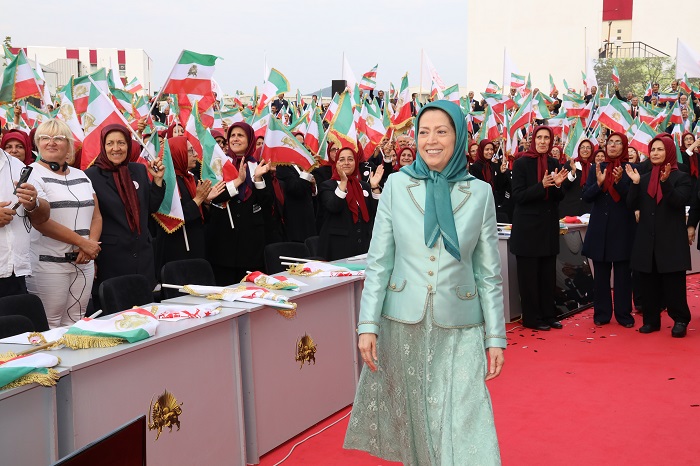 Maryam Rajavi, the President-elect of the National Council of Resistance of Iran (NCRI), entering the 54th founding ceremony of the People’s Mojahedin Organization of Iran (MEK)

Mrs. Rajavi concluded her speech by sharing the MEK’s message to the younger generation and to Iranian society as a whole.

“It is possible to break the chains of repression and exploitation.

“It is possible to liberate society from gender discrimination and create new relations based on gender equality and human solidarity.

“Freedom and justice are part and parcel. It is possible to instate freedom, justice, and equality and the MEK has risen to realize this goal.

“It is possible to have a genuine antithesis based on democratic Islam overcome ignorance, superstition, and reaction disguised in the cloak of Islam,” Mrs. Rajavi stated.

“Having compensated for the shortcomings of the revolutions of the past century, the Iranian Resistance has matured in the 21st century and borne fruit in the course of its struggle for freedom and equality,” she said.

“This is the organization, the tradition, the path and practice of the deprived but aware youths of Iran who created the uprisings of December 2017 and January 2018,” she continued.

“This is the movement and ideal of youths who have formed their resistance units and kept the flame of Iran’s uprising alight in every city across the country and inside the cells and wards of Khamenei’s prisons.

“They are resisting everywhere. By relying on its people, the great Army of Freedom will also take the same path to turn this dark page of Iran’s history,” she declared.

Mrs. Rajavi emphasized the resilience of the MEK in the face of torture and persecution, saying:

“There is not an infinitesimal possibility that the MEK would give up on their plan for freedom and popular sovereignty and the overthrow of the mullahs’ religious dictatorship.

And this is the pride which shines throughout the history of the MEK.

“They endured captivity in the cage and coffin, they went through the 1988 Massacre; they went to the gallows by the thousands; they lied down before Humvees and bulldozers in Ashraf; their bodies were hanged from the cliff in Charzebar or from beams in half-constructed buildings in cities across Iran, but they’re never was an infinitesimal possibility for them to give up their fight, and they will not do so until the day Iran is free.

In the contemporary history of Iran, the MEK is known for its commitment to carry on their bloody shoulders any burden that is necessary for the advancement of their struggle.”

Finally, Mrs. Rajavi sent words of encouragement to the people of Iran who are still waiting for freedom from the mullahs’ regime.

“I want to give assurances to the people of Iran that the MEK is capable of overthrowing the regime by relying on their people,” she emphasized. They are capable of replacing religious tyranny with freedom, democracy, and separation of religion and state. They can replace distrust with trust, insecurity, and fear with security, and injustice with equality.

“They are capable of leading Iran towards freedom, prosperity, and progress,” she concluded.