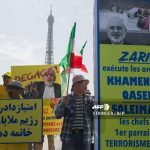 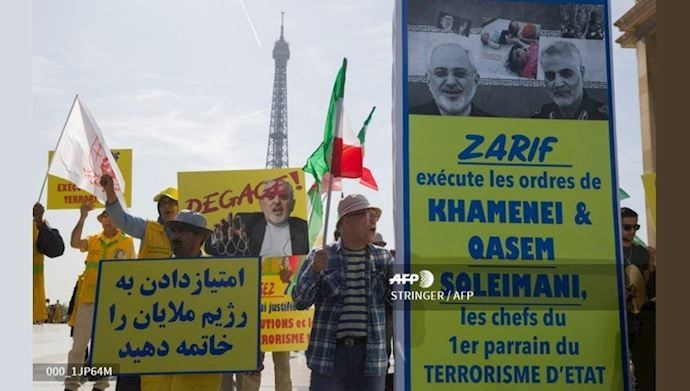 Iranian regime Foreign Minister Javad Zarif traveled to Paris on Friday to meet with French President Emmanuel Macron amidst a wave of protests from the Iranian diaspora in France, MEK supporters, and human rights activists.

Protests in France began early Friday morning in Paris’ Trocadero Square in protest of Zarif’s arrival, growing to a crowd of hundreds. 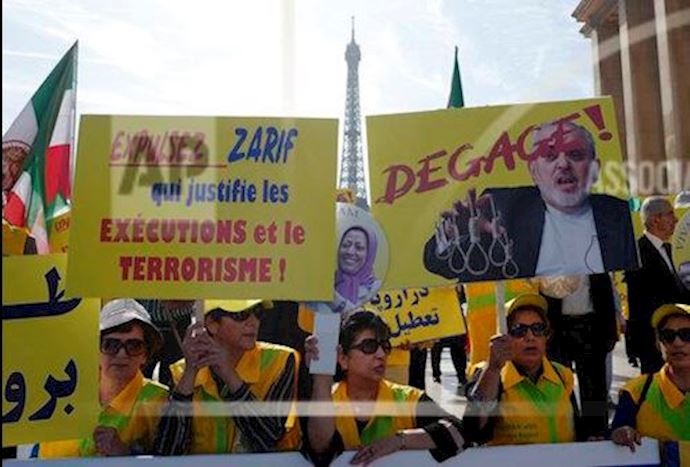 MEK supporters in Paris demand expel of Zarif from France

The demonstrators carried a banner that read, “Expel Zarif,” and chanted, “Zarif is a terrorist! Expel him!” and “Zarif is a charlatan and has to get out of France!”

The District One municipality in Paris hung a banner on its municipal building in opposition to Zarif’s visit. The banner featured an image of Zarif and read, “Iran’s Mullahs and its Foreign Minister violate our principles. We do not welcome them.” District One in Paris is a sister to Ashraf-3.

Disrespectful to the People of Iran

Paris is the last leg of Zarif’s European tour with foreign leaders, which began last weekend and included trips to Finland, Sweden, and Norway. The regime Foreign Minister was greeted with protests from MEK supporters and members of the Iranian communities in each of the countries he visited. The protesters condemned the Iranian regime’s despicable human rights record and its state-sponsorship of terrorism. They further said that it was disrespectful to the people of Iran who have fought the mullahs’ oppression for forty years to allow Zarif to enter Europe after multiple terrorist plots against the MEK and Iranian dissidents on European soil by the regime in 2018 were foiled by European authorities.

Five regime diplomats, including an ambassador, were expelled from Europe for their involvement in terrorist plots against the MEK and Iranian dissidents in 2018. Another four operatives and a regime diplomat are currently awaiting trial in Belgium for the attempted bombing of the Free Iran gathering outside of Paris in 2018.

Zarif, who ostensibly planned this European tour in an attempt to assuage the fears of the international community and convince the world that the Iranian regime is not dangerous or unstable, responded to the large crowds of protesters with predictable rage. In an August 21st interview with Iranian regime state-run Press TV, he openly threatened the protesters in Sweden calling for his expulsion, saying: “Ask any one of those individuals standing outside to attend any meetings by Iranians [the regime’s Revolutionary Guards and agents] and then see whether they would survive. They would not stay alive for a minute…. They cannot stay in Iraq either because the people of Iraq [the regime’s proxies in that country] will eat them alive.”

Swedish Foreign Minister Margot Wallström responded to the public outcry against Zarif’s presence in the country, saying that the Swedish government did not invite Zarif and that he had requested the visit.