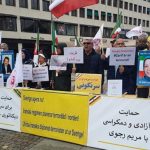 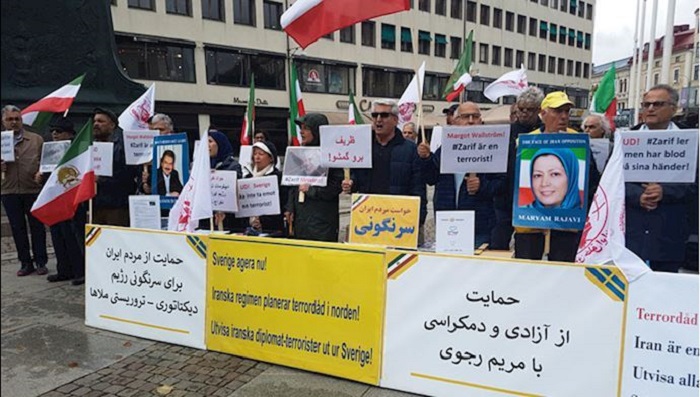 The Iranian diaspora, in Sweden, supporters of the MEK, protest against Zarif’s trip to Nordic countries, asking for an end to the policy of appeasement

Regime Foreign Minister Javad Zarif’s visit to Scandinavian countries this week was met with outrage by the Iranian communities, who held demonstrations in Sweden and Finland to protest his arrival.

On Tuesday, protesters in Stockholm held large banners reading “Stop appeasing the Mullahs’ regime. Expel their agents,” and “Kick Javad Zarif Out! Europe and Nordic countries are no Place for Criminals and Terrorists: World Peace, Stability, and Democracy Requires Regime Change in Iran.”

Others carried signs featuring Zarif’s face and the words “No to Despicable Shameful Diplomacy” and “Zarif Get Lost!”

The MEK and Iranian Resistance emphasized that meeting with the foreign minister of a country that has repeatedly committed terrorist acts against its opposition on European soil is disrespectful to the Iranian people who have spent 40 years fighting against the regime’s tyranny and oppression.

On Monday, yellow-jacketed MEK protesters and members of the Iranian communities in Helsinki greeted Zarif with banners and signs, demanding, “Zarif Get Lost!” in English and Finnish. Some carried signs shaped like hands proclaiming, “Stop appeasing mullahs in Iran.” Many of the protesters carried large Iranian flags.

Condemnation from the Iranian Resistance

Aug 20 – #Stockholm: #Iran'ian communities protest against Zarif's trip 2 #Sweden calling on FM Wallström to adopt a firm policy on Iran that recognises the democratic aspiration of the Iranian people & supports a democratic change by the people & their Resistance NCRI #ban_Zarif https://t.co/gLKtYaq4PT

The National Council of Resistance of Iran (NCRI) issued a statement on August 17th condemning Zarif’s trip to Scandinavia, writing, “The Iranian Resistance strongly condemns the visit by the head of the medieval theocracy’s diplomat-terrorists, as it will embolden the regime to continue and step up the flagrant and systematic violations of human right and the export of terrorism and warmongering. This trip only arouses the Iranian people’s anger and abhorrence and must be canceled.”

The MEK has called for Zarif’s blacklisting from the international community for years, citing his role in the regime’s terrorist activities. Zarif characterizes himself as a moderate, but his actions prove otherwise. As Foreign Minister of Iran, he represents and supports the world’s leading state sponsor of terrorism.

Talks with #Zarif a minister of a country that has repeatedly committed terrorist activities against its opposition in European soil,is a disrespect 2 Iranian people’s struggle for 40 years against tyranny & oppression.#ban_Zarif #NoImpunity4Mullahs#Zarif_inte_välkommen @SweMFA pic.twitter.com/9V29DHKaP0

In 2018, five Iranian regime diplomats, including an ambassador, were expelled from Europe for plotting terrorist attacks against the MEK and Iranian dissidents. Another four regime agents and a diplomat are currently in prison awaiting trial in Belgium for plotting a terrorist attack on the Free Iran Rally in Paris on June 2018.

The MEK urges the international community to blacklist Zarif and ends its appeasement of this terrorist regime. Diplomacy requires a good faith effort from both parties to reach an accord. Zarif and the mullahs have no intention of changing their behavior.

Zarif is scheduled to continue his tour with a stop in Norway this week. He is also set to meet in France with President Emmanuel Macron in the near future.