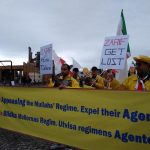 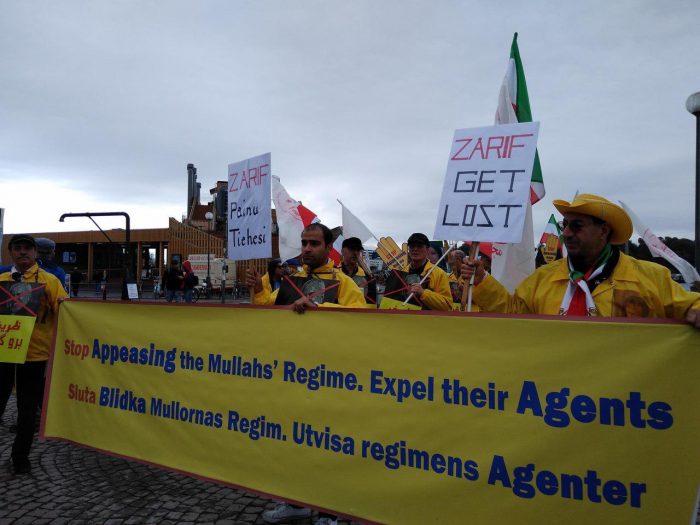 The Iranian diaspora, supporters of the MEK, protest against Zarif’s trip to Finland, asking for an end to the policy of appeasement.

Yesterday, 19 August 2019, Javad Zarif, visited Finland, and is now in Sweden, and will travel to Norway, in a tour visit to Scandinavian Countries. He is a well-known mouthpiece of the Iranian medieval theocracy. The National Council of Resistance of Iran (NCRI) expressed its objection to this trip in a statement on August 17, 2019. The NCRI said, “The Iranian Resistance strongly condemns the visit by the head of the medieval theocracy’s diplomat-terrorists, as it will embolden the regime to continue and step up the flagrant and systematic violations of human right and the export of terrorism and warmongering. This trip only arouses the Iranian people’s anger and abhorrence and must be canceled.”

Recently, the US sanctioned Javad Zarif, formally labeling him a terrorist enabler and blacklisting all of his property, assets, and investments.

US Treasury Secretary Steven T. Mnuchin said in a statement on the move, “Javad Zarif implements the reckless agenda of Iran’s Supreme Leader, and is the regime’s primary spokesperson around the world. The United States sent a clear message to the Iranian regime that its recent behavior is completely unacceptable.”

Secretary of State Mike Pompeo also said in a statement, “… The Iranian regime denies Iranian citizens’ access to social media, Foreign Minister Javad Zarif spreads the regime’s propaganda and disinformation around the world through these mediums… Iran’s Foreign Ministry is not merely the diplomatic arm of the Islamic Republic but also a means of advancing many of the Supreme Leader’s destabilizing policies, Foreign Minister Zarif and the Foreign Ministry he runs take their direction from the Supreme Leader and his office. Foreign Minister Zarif is a key enabler of Ayatollah Khamenei’s policies throughout the region and around the world. The designation of Javad Zarif today reflects this reality.” Pompeo added.

Recently, President @realDonaldTrump sanctioned Iran’s Supreme Leader, who enriched himself at the expense of the Iranian people. Today, the U.S. designated his chief apologist @JZarif. He’s just as complicit in the regime’s outlaw behavior as the rest of @khamenei_ir’s mafia. pic.twitter.com/XhDdqR6rik

The hosting of Zarif by the leaders of these Scandinavian countries is quite unacceptable for the Iranian people. They should remember that history has not looked kindly on appeasement of Nazi fascism in the early 20th century. Now also it is shameful to welcome a man representing a regime that holds a world record in executions, is a state sponsor of terrorism, is the primary source of crisis and chaos in the region, and is the main patron of Syrian dictator Bashar Al-Assad in his massacre of the people of Syria.

It is crystal clear that the main purpose of Zarif’s trip is to defend and whitewash the mullahs’ crimes and facilitate terrorist plots against the Iranian opposition, particularly the MEK. It is worth mentioning that, just in 2018, five of the regime’s diplomat-terrorists, including an ambassador, were expelled from Europe for their direct role in terrorist conspiracies against the Iranian Resistance and dissidents. Another four operatives, including a so-called diplomat, are in prison and awaiting trial in Brussels for plotting to bomb the Free Iran grand gathering in Paris in 2018.

Talks with #Zarif of a country that has repeatedly committed terrorist activities against its opposition in European soil, is a disrespect to Iranian people’s struggle for 40 years against tyranny & oppression.#Iran #ban_Zarif #NoImpunity4Mullahs#Zarif_inte_välkommen @Niinisto pic.twitter.com/ldBMqfsp7M

NCRI added in its statement, “Similar to the regime’s Supreme Leader Ali Khamenei, its President Hassan Rouhani, and the Quds Force Commander Qassem Soleimani, Zarif and other officials must face justice, just like Hitler’s Foreign Minister, for taking part and facilitating crimes against humanity and genocide.”