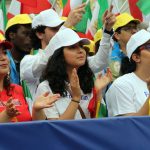 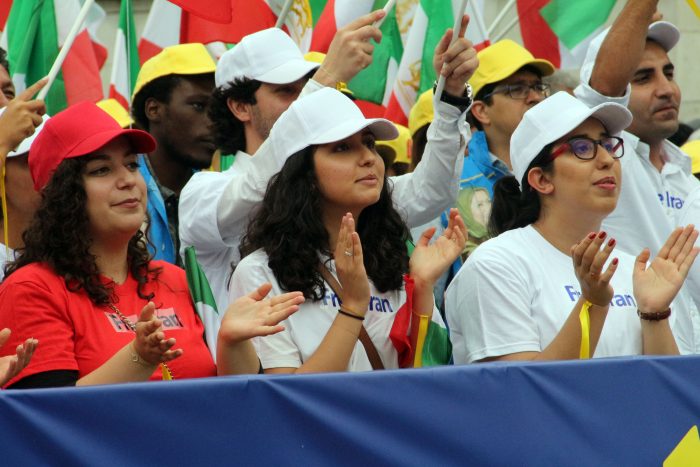 The Free Iran rally in LONDON, where over 3000 supporters of MEK gathered to show solidarity with the Iranian uprisings-July 27, 2019

The London Free Iran Rally last Saturday attracted media attention from news outlets throughout the world. More than 3,000 MEK supporters turned out to ask the international community to recognize the Iranian people’s right to overthrow the clerical regime and to end the policy of appeasement that has emboldened the mullahs to take increasingly hostile and aggressive actions both at home and abroad.

The @Daily_Express gave some echo to the #FreeIran Rally at Trafalgar Sq. yesterday by Anglo-Iranians.https://t.co/NS85KreJfB
Our response must be firm and result in a firm, principled policy towards the regime that hold its leaders and IRGC to account for these atrocities…

The following are excerpts from reports about the event:

“British speakers called on their government to change its current policies of appeasement vis-à-vis Iran and adopt a firm stance, and recognize the Iranian people’s democratic demands. They also called for an initiative to force the Iranian regime to provide democracy; respect human rights; end all executions; stop all warmongering activities, exportation of terrorism and Islamic fundamentalism; and halt its nuclear program.”

“On July 27, some 3,000 Iranians living in the UK demonstrated on the streets of central London, demanding comprehensive sanctions against the mullahs’ regime.

“Along with deteriorating international relations, the regime in Iran is accused of severe human rights violations and barbaric treatment—especially of prisoners, such as that of Britain’s own Nazanin Zaghari-Ratcliffe. 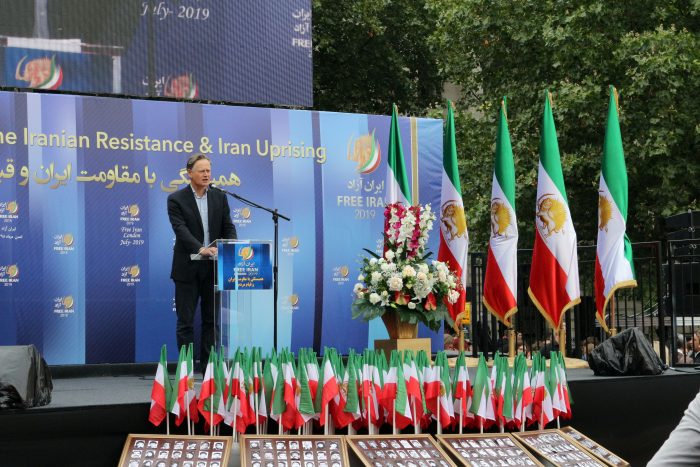 Matthew James Offord the Member of Parliament for Hendon, addressing some 3000 MEK supporters at Free Iran rally in London, July 27, 2019

He told the chanting crowds: “The decision by world powers to decouple human rights and terrorism from the nuclear deal was a mistake and a missed opportunity.

“‘I believe the UK Government must now act to proscribe the IRGC and the Ministry of Intelligence as terrorist organizations in their entirety in response to Teheran’s aggression.’

“Thousands of people descended on Trafalgar Square, many of whom were exiles who were forced to flee from their homes under the brutal and oppressive regime.

“NCRI’s president-elect Maryam Rajavi called on Britain and Europe to stop “paying ransom to the mullahs” in a speech projected onto a screen at Trafalgar Square.

“‘Do not help them decrease the sanctions. Stand up to them. Place the Revolutionary Guard Corps (IRGC) and the mullahs’ Gestapo [Ministry of Intelligence and Security (MOIS)], Khamenei’s office and [Iranian regime President] Hassan Rouhani on the terror list.

“‘I specifically urge the new UK government to support human rights, namely the suppressed human rights of the people of Iran.

“‘I urge them to take action to send an international fact-finding mission to Iran to visit the regime’s prisons and the political prisoners particularly, the women.’” 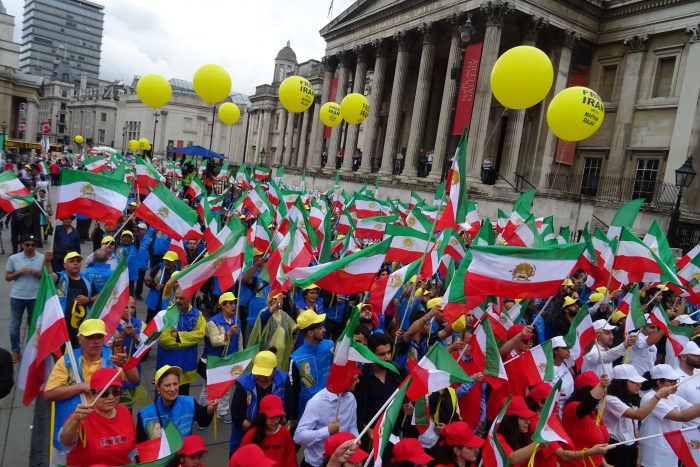 “Demonstrators in downtown London rallied against the mullahs’ regime in Iran, calling on the United Kingdom to designate the IRGC, the MOIS and the office of Iranian regime Supreme Leader Ali Khamenei as terrorist entities.”

“Titled ‘Supporting the Iranian people’s protests,’ the demonstration was held following a series of rallies and gatherings by Iranian dissidents during the past few weeks covering the capitals of various countries, including the United States and Western Europe.

“Thousands of exiled Iranian dissidents rallied in Trafalgar Square in London on Saturday to demand regime change in Tehran, urging new UK Prime Minister Boris Johnson to get behind their campaign.

“Struan Stevenson, the coordinator of the Campaign for Iran Change, said: ‘We want regime change, we want to get rid of this evil regime. We’re here underneath the statue of Admiral Nelson. What would Nelson make of a British ship being seized by pirates? He would be turning in his grave.

“‘So our message today to Boris Johnson is to be tough on this regime as they are spreading terrorism and war across the Middle East and the world.’”