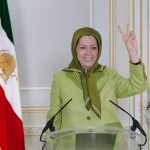 Maryam Rajavi to London Rally: “Iran Will Be Free” 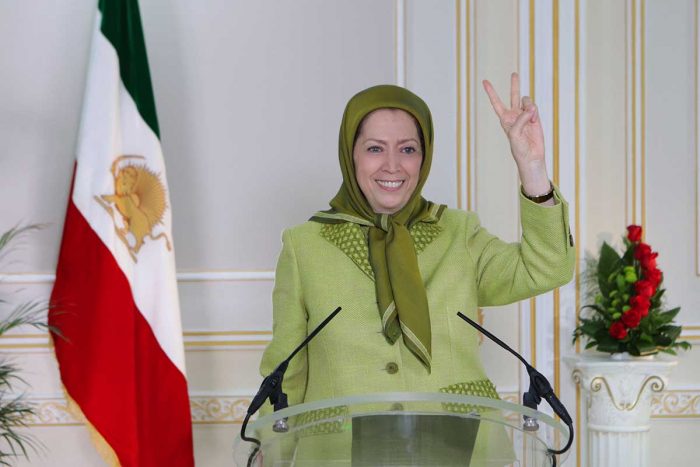 Maryam Rajavi, the President-elect of the Iranian opposition, addresses more than 3000 supporters of MEK in London, via video, during the Free Iran Rally in London-July 27, 2019

More than 3,000 MEK supporters gathered in London on Saturday, July 27th to rally in support of a free and democratic Iran. The London Free Iran Rally was the final event in a series of activities that were held this summer by the MEK and NCRI in world capitals in order to urge the international community to cut financial ties with the Iranian regime and to recognize the right of the Iranian people to overthrow the clerical regime.

We urge Britain, Europe and all governments to halt giving concessions to the mullahs. #FreeIran https://t.co/QsH4xDv9yl pic.twitter.com/m4adgnUSvv

Mrs. Maryam Rajavi delivered a video address to the attendees at the rally, in which she urged the U.K. to end the policy of appeasement and to support human rights in Iran. Her speech is excerpted below.

“Your demonstration today in London marks the peak of a series of Free Iran rallies taken place over the past one-and-a-half months in Brussels; Washington, D.C.; Berlin; and Stockholm.

It is also an extension of the Iranian Resistance’s five-day annual gathering, two weeks ago, at Ashraf 3,” Mrs. Rajavi said to the assembled crowd.

“The clerical regime has again unleashed another barrage of fake and misleading news against the Iranian Resistance through a fake Twitter account presumably belonging to a French Consul General,” she said, referring to the cyber scandal that was uncovered last week. “The Foreign Ministry of France issued an official statement denying the news, and Twitter also shut down the regime’s fake account,” she continued.

Lies by IRGC News Agency regarding my illusionary visit to Israel shows regime’s desperation and need for fake news against Iranian resistance. #Iran

“The mullahs’ regime has reiterated time and again that they do not have a red line and they tolerate anything against the regime, even for Khamenei. However, just as it was the case during the massacre of political prisoners in 1988, the most forbidden name and the red line is the name of the PMOI [MEK],” Mrs. Rajavi emphasized.

“This is the identity, path, and tradition which terrifies the religious dictatorship even inside the regime’s jails and torture chambers. Khomeini issued a fatwa ordering the massacre of anyone who remained loyal to the name and ideals of the MEK. But the victims cried out Massoud Rajavi’s name even at the gallows,” she said.

“Hossein Ali Montazeri, Khomeini’s heir at the time, said the MEK cannot be eliminated through killing, but will further spread,” Mrs. Rajavi added.

Ready to Pay the Price

“Today, we see that the MEK is spread in Iran by the expansion of resistance units and 1,000 Ashrafs. The message of the people of Iran and supporters of Ashraf is the same everywhere: freedom and a free Iran. The mullahs must go. Regime change and regime change” said Mrs. Rajavi. “And we do not get tired of repeating and insisting on these calls. We will cry out and repeat them again and again until the day they are realized. And of course, they would be certainly realized with your support,” she added.

“Why and for what reason?” she asked. “As Massoud Rajavi the historical leader of MEK said, ‘Because of remaining loyal to our pledges and making the endless sacrifice in Iran’s history.’ A glance over the list of execution victims, particularly the list of the victims of the 1988 massacre, reveals the truth of this statement. Our people, our Resistance and the Mojahedin of Ashraf, have proven that they are prepared and ready to pay the price of freedom.”

Mrs. Rajavi noted the contrast between the MEK’s fight for freedom and the actions of those who have sought to appease the mullahs. “Our Resistance has proven that peace and freedom can only be earned through fighting the mullahs’ religious dictatorship. This is in diametric opposition to the proponents of appeasement who defend the regime under the guise of peace.”

She stressed that the prerequisite to peace in the Middle East is the overthrow of the Iranian regime and went on to detail the many ways that the policy of appeasement has failed.

I specifically urge the new UK government to support human rights, namely the suppressed human rights of the people of #Iran. I urge them to send an int’l fact-finding mission to Iran to visit the regime’s prisons and the political prisoners particularly, the women. #FreeIran pic.twitter.com/A1aMmRCom9

“Really, are the mullahs and IRGC’s attacks on shipping in the Persian Gulf, jeopardizing regional and international security, in any way related to the policy of appeasement, the clampdown on the MEK, and overlooking the violations of human rights in Iran in the nuclear deal? Didn’t concessions to the mullahs from the account of the Iranian people and Resistance further embolden the mullahs? Mrs. Rajavi asked.

“How did the proscription of the MEK, disarming the Liberation Army, and bombardments of their basecamps in those years, with U.K.’s assistance, change the balance of power on the ground and in whose interest? Did they benefit peace and security or working against them? Indeed, has the clerical regime given up on its hostage-taking of European and American citizens and nationals?” she continued.

“Why has the regime increased the level of uranium enrichment and why has it added to the range of its ballistic missiles? Which regime benefits and for what purpose from the demonization of the MEK and the Iranian Resistance? Indeed, what happened to the moderate and reformed mullahs you encouraged and advocated for four decades? she went on.

“Didn’t the people of Iran put an end to the political theatrics of fundamentalists vs. reformists by their uprisings?” Mrs. Rajavi added.

“Yes, the policy of giving maneuvering room to the mullahs has been and continues to be totally disappointing and a disaster, and it will continue to be so. This policy is not only against the people of Iran but against regional and global peace and security,” Mrs. Rajavi stressed.

“The Iranian Resistance has paid the heaviest price and has always reiterated that the mullahs understand no language except the language of force and firmness.”

“We urge Britain, Europe, and all governments to halt giving concessions to the mullahs. Do not help them decrease the sanctions. Stand up to them. Place the Revolutionary Guard Corps [IRGC] and the mullahs’ Gestapo [MOIS], Khamenei’s office and Hassan Rouhani on the terror list,” Mrs. Rajavi said.

Genuine calls for peace can be realized only by peace and human rights. Its prerequisite is the overthrow of the ogre of war and oppression, i.e. the Velayat-e faqih dictatorship. #Iran #FreeIran https://t.co/QsH4xDv9yl

“We urge you to set aside the policy of overlooking the main force in Iranian society and history. Instead of complicity and shaking hands with the religious fascism, stand on the side of the people of Iran for regime change,” she continued.

“I specifically urge the new UK government to support human rights, namely the suppressed human rights of the people of Iran. I urge them to take action to send an international fact-finding mission to Iran to visit the regime’s prisons and the political prisoners particularly, the women.

Baroness Boothroyd, the former speaker of the House of Commons, once said that the massacre of political prisoners in Iran, which took place after Khomeini was forced to accept the ceasefire in the [Iran-Iraq] war, has been the greatest crime against humanity since the Second World War. She said this crime remains unaccounted for but there will come a day when we would witness the truth get rectified,” said Mrs. Rajavi.

I also tribute to the eternal names and brilliant conscientious individuals from among the people of Britain and its contemporary history including Lord Corbett, Lord Slynn and Lord Russell –Johnston who lent their unsparing support to the #Iran ian Resistance #FreeIran pic.twitter.com/NpVENEjx1D

“The ruling regime is surrounded by an impatient nation confident that her liberation will not be realized unless the mullahs are overthrown. The clerical regime has no more strength or resources and is struggling in a quagmire which will lead to its overthrow.

The era of religious fascism is coming to an end; Iran will be free. We will take back our most beautiful homeland by the resistance units and the Army of Freedom,” she concluded.