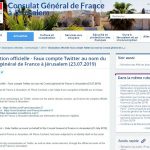 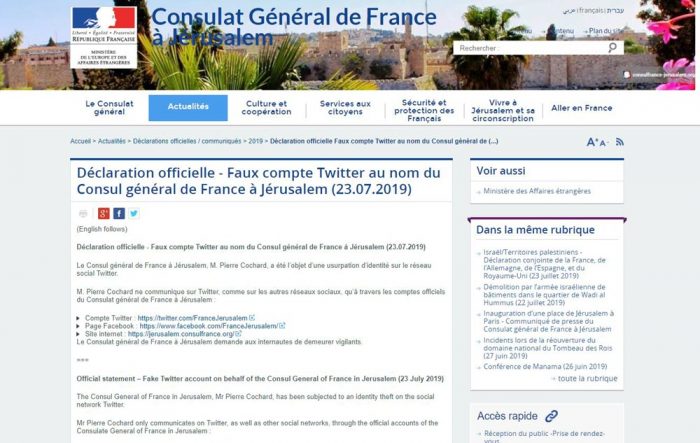 Statement from the French Ministry of Foreign Affairs, confirming that the French diplomat’s identity has been subject to misuse.Maryam Rajavi, the President-elect of the Iranian opposition, rejected the lies by IRGC, News Agency regarding an illusionary visit to Israel and considered “it a show of regime’s desperation and need for fake news against the Iranian resistance.”

Lies by IRGC News Agency regarding my illusionary visit to Israel shows regime’s desperation and need for fake news against Iranian resistance. #Iran

The French Ministry of Foreign Affairs released an official statement this week in response to the recent scandal over a series of tweets that were sent from a fake account controlled by the regime’s Ministry of Intelligence and Security (MOIS) and Islamic Revolutionary Guards Corps (IRGC).

Roots of the Scandal

The scandal arose after the five-day Free Iran Conference at Ashraf 3 in Albania this month. The event drew worldwide media attention and effectively countered forty years of regime propaganda against the MEK. In addition, this summer’s Free Iran rallies in world capitals have attracted thousands of supporters and challenged the regime’s narrative that the MEK does not have the support of the Iranian people.

Absurdities reflecting mullahs’ wrath and desperation in dealing with popular uprisings in Iran, five days of Resistance gatherings in Albania and protests by tens of thousands of Iranians in Brussels, Washington, Berlin, and Stockholm. #Iran #FreeIran @francediplo_EN

The mullahs were enraged by these events and tried to launch a new disinformation campaign. On July 23rd, the IRGC news agency reported that Pierre Cochard,” a French diplomat resident in Israel,” tweeted that Mrs. Maryam Rajavi was traveling to Israel with the purpose of “meeting with Prime Minister Benjamin Netanyahu and the head of the Mossad spy agency.” The report also falsely stated: “The trip, carried out with the help of Giuliani and in coordination with Israel’s ambassador to Albania Boaz Rodkin, has direct ties with the MEK and the Israeli intelligence agency (Mossad).”

Oddly enough, the Iran lobby and the advocates of the Iranian regime tried using the fake news as a new item to use to demonize the MEK. The social media was filled with posts trying to make use of the disinformation. Here are a few that were debunked by other journalists or users exposing the propaganda and the mal-intentions behind it.

The tweets referred to in the false news report were posted on July 17th by a person claiming to be a French consul general in Jerusalem. The details of the non-existent trip were described in five tweets. In his first tweet, however, he wrote, “I received the news from a former colleague who I worked with him in Tehran.” This was a fairly obvious hint that the “French diplomat” was in actuality an MOIS agent.

Statement from the French Consulate

“Mr. Pierre Cochard only communicates on Twitter, as well as other social networks, through the official accounts of the Consulate General of France in Jerusalem.”

Statement from the NCRI

The Security and Counter-Terrorism Committee of the National Council of Resistance of Iran issued its own statement on Wednesday in response to the scandal.

The statement said: “The lies of the Revolutionary Guards’ news agency about an illusionary travel by Mrs. Rajavi show the regime’s desperation and its severe need for the fake intelligence and fake news against the Iranian Resistance.”

It emphasized once again that the mullahs must be evicted from the Internet and social networks. The IRGC and the mullahs’ intelligence use the Internet to disseminate lies, propaganda, and disinformation, and to set the stage for terrorist activities.