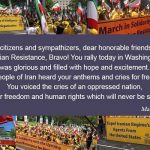 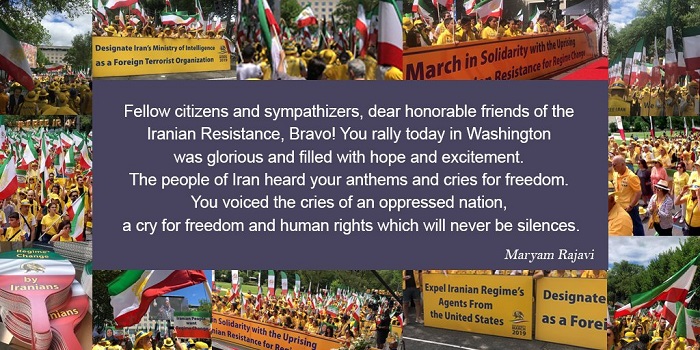 MEK supporters “March for Regime Change by Iranians” were widely reflected in the U.S. media and on a global level.

Thousands of supporters of the MEK Iran and members of the Iranian-American communities gathered outside of the U.S. State Department in Washington, D.C. last Friday for the second in a series of Free Iran rallies that are being held this summer.

The Iranian-Americans march from the @StateDept to the @WhiteHouse in solidarity with protesters in Iran who seek regime change and a #FreeIran.#March4RegimeChangeByIranians #IStandWithMaryamRajavi pic.twitter.com/w43GS4W7dt

Participants in the rallies are asking the international community to recognize the Iranian people’s right to overthrow the ruling regime and to hold the regime accountable for its terrorist activities and its human rights violations.

Numerous well-known current and former U.S. politicians from both sides of the aisle delivered speeches and sent messages of support in a bipartisan show of solidarity for the Iranian people and their fight for a free and democratic Iran.

Mrs. Maryam Rajavi, President-elect of the National Council of Resistance of Iran (NCRI), delivered a speech via satellite link. In her address, Mrs. Rajavi urged the U.S. to avoid the temptation to succumb to the policy of appeasement to the mullahs that allows the regime to act without consequences.

What is the real question at the core of the U.S. and European policy vis-a-vis the religious fascist regime ruling #Iran: appeasement or decisiveness? #March4RegimeChangeByIranians #FreeIranhttps://t.co/k5UsN2hDGy pic.twitter.com/fdKlMIXu21

“When the mullahs pay no price for their conduct, they become more emboldened and go even further. Firing of rockets in Mosul and Basra and the missile attack on the U.S. drone are clear examples,” she said.

Mrs. Rajavi stressed that the regime’s regional warmongering created instability in the Middle East and plundered the wealth of the Iranian people. “The people of Iran who have been inundated with floods, destitution, and various calamities are crying out, ‘Let go of Syria, think of us instead!’” she said.

“But the regime’s crimes in Iraq, Syria, Yemen, Lebanon, and Afghanistan have so far brought them no serious consequences,” she added.

Mrs. Rajavi reiterated what she and many others have said countless times: “The experience of the past forty years has shown that the theocratic regime is incapable of any reform or change in behavior.”

“We do not want anything more than freedom and human rights, which will open the way for development and justice. This will ensure peace and security in Iran and the Middle East, an Iran free of religious fascism, a non-nuclear Iran, an Iran without terrorism and belligerence,” Mrs. Rajavi concluded.

“Back home Iranians took to the streets of the nation’s capital, including right in front of the White House. They shouted free Iran, calling for tighter sanctions and democracy in their country. The protesters are followers of the largest Iranian opposition group, the National Council of Resistance of Iran (NCRI). And that march is part of the series of global public demonstrations held against the regime. They started at Brussels last week , urging the European Union leaders urging them to follow steps of the U.S. in taking a tougher policy towards the regime such as designating the IRGC as a terrorist organization.”

The Iran's regime is the only country in the world that continues to execute children,” said Sadaf Mirzai. “We stand with the leader of the Iranian Resistance Massoud Rajavi, who has inspired my generation.#March4RegimeChangeByIranians #IStandWithMaryamRajavi #FreeIran pic.twitter.com/VqAQRPlv80

Breitbart News interviewed one of the young  Iranians at the Free Iran rally to gain insight into the motivation behind young people’s involvement in the Resistance movement. Delaram Ahmady told Breitbart that her father was imprisoned by the Iranian regime for seven years because of his support for the MEK. After his release, he moved his family to the U.S. because of “constant harassment.”

Ahmady said that she feels lucky to have escaped from Iran, where several of her father’s cellmates were recently executed, and that she has a responsibility to “show solidarity with the people of Iran.”

“The chances of regime change, I think, are definitely growing as the years go on,” Ahmady said. “The youth are becoming more empowered, they’re becoming more organized.”

March to the White House

The rally was followed by a march from the State Department to the White House. Demonstrators chanted, “Down with terrorist regime in Iran!” and “Rajavi yes, mullahs no; they are terrorists, they must go!”

Vice President-Mike Pence: What we want to do is stand with the Iranian people, thousands gathered outside the @WhiteHouse on Friday & tens of thousands which took to the streets last year in communities across #Iran.

Protesters carried signs reading, “STOP Executions in Iran,” “Designate Iran’s Ministry of Intelligence as a Foreign Terrorist Organization,” and “Down with Terrorist Regime in Iran.”