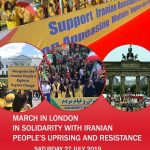 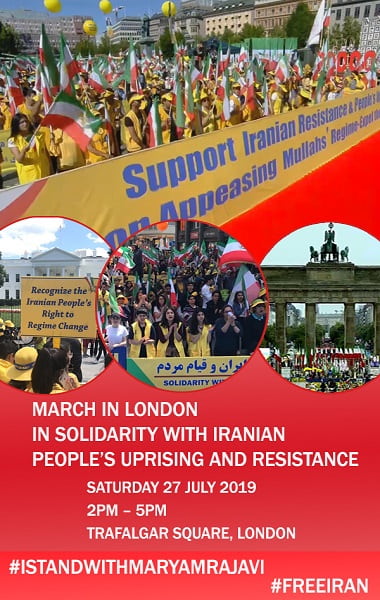 The firth Free Iran rally by supporters of MEK will be held in London, Trafalgar square on Saturday the 27th of July 2019

MEK supporters will gather in London on Saturday, July 27th, to show solidarity with the Iranian people’s anti-regime uprisings and to ask the international community to recognize the right of the people of Iran to overthrow their oppressors. They are further calling for the United Kingdom to recognize the National Council of Resistance of Iran (NCRI) and its President-elect, Mrs. Maryam Rajavi, as the viable democratic alternative to the regime, and they are asking that the U.K. end its support of the mullahs’ regime by imposing sanctions on Iran and by cutting all financial ties with the Iranian regime.

The rally will be attended by MEK and NCRI supporters and members of the Anglo-Iranians communities and will include speeches by a cross-party delegation of Members of British Parliament, prominent human rights activists, and well-known figures from the U.K.

The London rally is the final event in a series of Free Iran rallies that have been held this summer in world capitals. Previous rallies in Brussels; Washington, D.C.; Berlin; and Stockholm drew tens of thousands of attendees and attracted hundreds of prominent politicians, human rights activists, lawmakers, and dignitaries. The annual Free Iran Conference was held at Ashraf-3, the MEK’s newly-constructed headquarters in Albania earlier this month. The five-day conference featured panel discussions, hundreds of distinguished speakers from around the world, testimony from survivors of the 1988 Massacre, and an exhibition of the history of the MEK’s struggle under the Iranian regime.

This year’s Free Iran events are taking place during a period of unprecedented tensions between the Iranian regime and the international community. In the past several weeks, the regime has increased its acts of aggression with a series of attacks in the Strait of Hormuz. Ships, tankers, and a drone have all been targeted by the Iranian regime.

Inside the country, the Iranian regime has cracked down on political dissent and increased the number of executions. Conditions inside Iranian prisons have deteriorated beyond their already substandard state, forcing many political prisoners to go on hunger strikes in an attempt to secure basic rights.

Attendees at the Free Iran Rally in London want the U.K. government to acknowledge the current state of affairs and end the policy of appeasement toward the Iranian regime that has emboldened the mullahs to act without consequences. MEK supporters at the rally will ask the U.K. to take concrete steps to pressure the Iranian regime to end its human rights abuses, stop its nuclear and ballistic missile programs, and end its warmongering and exportation of terrorism.

Iranians supporters of #NCRI and #MEK in Germany in support of the "resistance units" and in solidarity with Iranian people's uprising held a #FreeIran rally on 27 July 14:00 in London.#IStandWithMaryamRajavi #WeSupportMEK pic.twitter.com/Dp2bsK2b8B

The London Free Iran Rally will start at Trafalgar Square and will conclude with a march. In addition to speeches, Saturday’s event will also include street exhibitions and theater performances condemning the Iranian regime for its human rights violations and malign activities. The rally is expected to draw thousands of attendees.