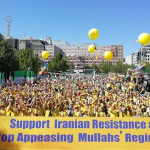 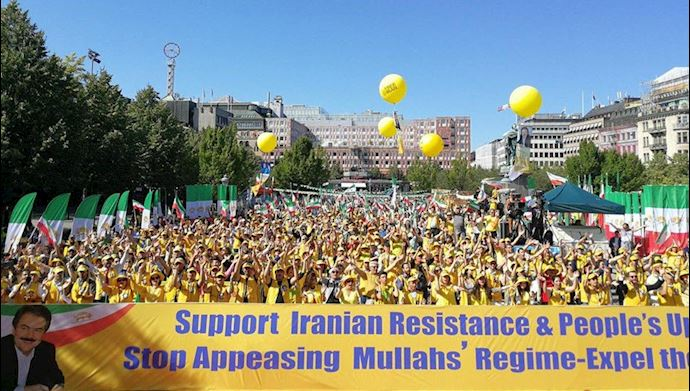 More than five thousand MEK supporters gathered in Stockholm, Sweden on Saturday for the most recent in a series of Free Iran rallies taking place in world capitals this summer. Rally attendees and numerous European dignitaries and politicians called for the international community to recognize the Iranian people’s right to overthrow the clerical dictatorship and to recognize the National Council of Resistance of Iran (NCRI) as the democratic alternative to the mullahs’ regime. They also called on the international community to end the policy of appeasement that has emboldened the regime to take increasingly aggressive actions.

5000 #Iran'ians Demonstrate in #Stockholm
On July 20, 5000 Iranians in a major demonstration in Stockholm called for a solid policy and comprehensive sanctions against the mullahs’ regime, terrorist listing of the IRGC, the MOIS and…https://t.co/FmNsJc4y9G #Freeiran pic.twitter.com/tZRW3eGpy2

The following are some of the highlights from the rally’s speakers:

“The demonstrations in Iran show what the Iranian people want: democracy, not dictatorship; freedom, not terror. We have to listen to those screams,” Ms. Yade said.

.@ramayade: "Iran's regime has triggered a nuclear arms race & poses a threat of fundamentalism. You can’t negotiate with it. At a time when the world seeks a solution to Iran, we must think of an alternative. I think it's the MEK"
#IStandWithMaryamRajavi #WeSupportMEK #FreeIran pic.twitter.com/zEo7k360T5

“This regime has triggered a nuclear arms race and is posing a threat of fundamentalism. You can’t negotiate with this regime. At a time where the world seeks a solution to Iran, we must think of an alternative. I think it is the PMOI [MEK]. The Iranian Resistance has identified this threat long ago. Its members have paid the price,” she added.

Mrs. Rajavi delivered a video message to the rally.

“The time has come for putting an end to the appeasement of the religious fascism in Iran. There are no more excuses for overlooking the enemy of the people of Iran,” she said.

By displaying the wide scope and dynamism of this movement which extends from resistance units in cities across #Iran to the grand rallies in various countries, you have demonstrated the Iranian nation’s grim will for the overthrow of the mullahs’ dictatorship. #FreeIran pic.twitter.com/qaaR36exiL

“The myth of moderation of this regime, illusions about any likely reforms in it, and constructive and critical dialogue with it, no longer deceive anyone. The Iranian Resistance has paid the heaviest price to prove that such claims are but hollow,” Mrs. Rajavi added.

I urge the governments of Sweden, Norway, Denmark and Finland to pressure the Iranian regime to open its prisons to visits by an international fact-finding mission. #Iran #FreeIran pic.twitter.com/T4RcmCxI9p

“I urge the governments of Sweden, Norway, Denmark and Finland to pressure the Iranian regime to open its prisons to visits by an international fact-finding mission,” she said, emphasizing the regime’s human rights violations toward political prisoners.

“Nordic countries, all of Europe, and the world must recognize the right of the people of Iran for resistance to overthrow the clerical regime and establish democracy and popular sovereignty,” she stressed.

“The people of Iran are suffering. That’s why there are huge demonstrations in the country. The people want to change the government. It’s very important that there’s a ten-point plan for democracy and freedom in Iran, by Madam Maryam Rajavi. The Swedish Foreign Minister should show solidarity with Mrs. Rajavi,” said Mr. Sasi.

“There’s only one solution for Iran. It is regime change. We are gathered here today to say that the people of Iran are the force of change,” he concluded.

Italian Senator @LucioMalan: "I call on European authorities: Stop appeasing the mullahs’ regime in Iran, a regime that kills the people of Iran, destabilizes the Middle East with its terrorism and also threatens the world."#IStandWithMaryamRajavi #FreeIran #WeSupportMEK pic.twitter.com/b0ng5fYPzH

“We must support Mrs. Maryam Rajavi. I call on European authorities: Stop appeasing the mullahs’ regime in Iran, a regime that kills the people of Iran, destabilizes the Middle East with its terrorism and also threatens the world,” said Senator Malan.

Senator @LucioMalan: "I urge @vonderleyen to listen to @Maryam_Rajavi, to 40 million Iranian women who despise the regime. There must be a new EU policy. Expel Iran regime's agents from Europe & support those who want regime change" #IStandWithMaryamRajavi #FreeIran #WeSupportMEK pic.twitter.com/FWlfcX4Msc

“I call upon the European Commission Chief to listen to Mrs. Rajavi, to 40 million Iranian women who are tired of this regime that hates the women of this country. There must be a new EU policy. Expel the agents of this regime from Europe and support those who want to change this regime,” he said.

“We want to tell the people inside Iran that they’re not alone in their fight against repression. The Swedish government must do more to support them,” said Mr. Oscarsson.

Edvard Julius Solnes, Iceland's ex Environment Minister: “Europe's appeasement policy toward Iran's regime has failed. It's time for the EU to change its policy toward Iran. We must formulate a new resolution to condemn the mullahs”#IStandWithMaryamRajavi #FreeIran #WeSupportMEK pic.twitter.com/1w86pIPJQP

“The appeasement policy has failed. Western governments are happy to have signed the nuclear agreement with the mullahs, and they are willing to push other issues such as human rights violations under the carpet if it makes money for them,” said Solnes.

“It is time for European countries to change their policy toward Iran,” he concluded.

“The EU must end the impunity the regime has enjoyed in the past decades. It can do this by recognizing the 1988 massacre as a crime against humanity and bring its perpetrators to justice. Next, it must designate the IRGC and MOIS as terrorist entities. It is necessary to push back against the regime both at home and across the world,” said Senator Horkan.

“The people of Iran will shape the future of Iran. You are here to give voice to their legitimate demands,” The EU must abandon its appeasement policy and adopt a firm policy toward Iran,” he added.

Ex Irish Minister @Campaign4Perry: “I urge the EU to abandon the appeasement policy toward Iran's regime & hold its leaders to account for their atrocities. We need an EU policy that supports the Iran ppl's aspirations for freedom.” #IStandWithMaryamRajavi #FreeIran #WeSupportMEK pic.twitter.com/fyLp4zAlFX

“I had the honor of visiting Ashraf 3. We met the residents. We spoke to PMOI [MEK] members. We listened to your inspiring leader, Mrs. Maryam Rajavi. With the dedication of the residents of Ashraf 3 and the leadership of Madam Rajavi, I have no doubt that you will achieve freedom and democracy for your people,” said Perry.

“We are here to send a strong message to all those who are still dreaming of appeasing the Iranian regime and are thinking of constructive dialogue with this regime. The first and last word of the MEK’s Resistance Units and the youth of Iran is the downfall of this regime,” said Ms. Salimian.

“The regime must be expelled from the international community,” she added.

“We the people of Iran have the right to resist, to have a resistance base such as Ashraf 3, and to have leadership like Iranian Resistance leader Massoud Rajavi and NCRI President Maryam Rajavi, just as Europeans had great resistance leaders,” said Mr. Khazaii.

“This regime is the number one enemy of humanity. Today, the Iranian people are at the forefront of the fight for humanity, because fundamentalism is going to expand culturally and militarily in the Middle East. It is threatening the stability and security of the world; it is threatening our democracies,” he added.

.@iran_policy member Mohammad Ali Tohidi in Nordic countries at the Stockholm demonstration – July 20, 2019
This demonstration is part of an int campaign to realize #IranRegimeChange. The mullahs’ regime resorts to any measures to survive. #WeSupportMek #IStandWithMaryamRajavi pic.twitter.com/daxzOD4d72

“The blood of our martyrs and the suffering of our prisoners will ensure our victory. We call on European government to stand with the Iranian people and to stop their appeasement policy and to expel the agents of the Iranian regime from their countries,” Mr. Tohidi emphasized.