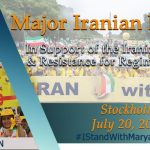 MEK to Hold Next Free Iran Rally this Saturday in Stockholm 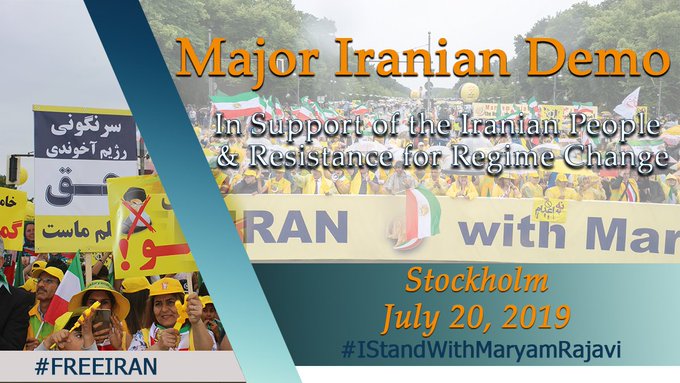 Thousands of MEK supporters and members of the Iranian diaspora from around the world will gather in Stockholm, Sweden this Saturday, July 20th, for the next in a series of Free Iran rallies being held this summer. The Stockholm rally is intended to show solidarity with the Iranian people’s uprisings and their stated desire for regime change at the rally and march. Rally goers also will call on the European leaders to adopt firm policies toward the Iranian regime, including sanctions on regime Supreme Leader Ali Khamenei and regime President Hassan Rouhani, and the expulsion of regime agents from European countries. Finally, rally attendees are asking that the international community recognize the right of the Iranian people to overthrow their oppressors and to specifically recognize the MEK and the National Council of Resistance of Iran (NCRI) as the viable democratic alternative to the mullahs’ clerical regime.

Iranians will march for freedom in Stockholm on Saturday to urge European government to end appeasement towards Iran’s regime & recognize the right of Iranian ppl to overthrow their dictators. We'll be live tweeting the MEK's #FreeIran rally. #WeSupportMEK #IStandWithMaryamRajavi pic.twitter.com/qJvKWFEF1o

A number of prominent Swedish dignitaries and politicians will be among the speakers at Saturday’s rally.

The MEK believes that the longstanding policy of appeasement toward the mullahs has emboldened the regime and led to its nuclear and ballistic weapons programs, its warmongering in the Middle East, its terrorist plots against the MEK in Europe and the U.S., and its recent aggression in the Strait of Hormuz. The regime has also committed gross human rights violations against its own people for the past four decades without fear of repercussions.

By remaining silent in the face of the regime’s malign activities and continuing to take no action against the Iranian regime and its affiliates, the MEK believes that the international community is complicit in preserving this criminal dictatorship. The Free Iran rallies are meant to draw attention to the regime’s misdeeds and encourage the international community to stand up to the mullahs and let them know that their actions have consequences.

Supporters of the MEK in Stockholm are in favor of NCRI President-elect Maryam Rajavi’s Ten-point Plan for Iran’s Democratic Future, which guarantees free and democratic elections, gender equality, separation of mosque and state, and a non-nuclear Iran.

The Stockholm Free Iran Rally is the penultimate event in a series of rallies, marches, and conferences held this summer by the MEK and NCRI. The NCRI holds an annual Free Iran gathering each summer, but support for the Iranian Resistance has grown so dramatically in the past year that five rallies and a five-day conference were scheduled for this summer. Previous rallies in Brussels; Washington, D.C.; and Berlin drew thousands of supporters and attracted dozens of highly-respected politicians, human rights activists, lawyers, and dignitaries. Another rally is scheduled for July 27th in London, which is expected to draw thousands of more supporters.

Massive rally by the supporters of the Iranian resistance #NCRI and #MEK in solidarity with the uprising of Iranians for #RegimeChange & a "#FreeIran"
Saturday 20 July, 2019 – Stockholm
Saturday 27 July, 2019 – London#IStandWithMaryamRajavi #WeSupportMEK pic.twitter.com/54iCmONLBj

The annual Free Iran Conference was held last week at Ashraf 3, the MEK’s newly-built headquarters in Albania. The five-day event attracted hundreds of dignitaries from all over the world and featured speeches, an exhibition, testimony from survivors of the 1988 Massacre, panel discussions, and a keynote address from Mrs. Maryam Rajavi.