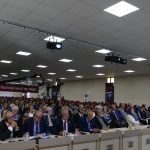 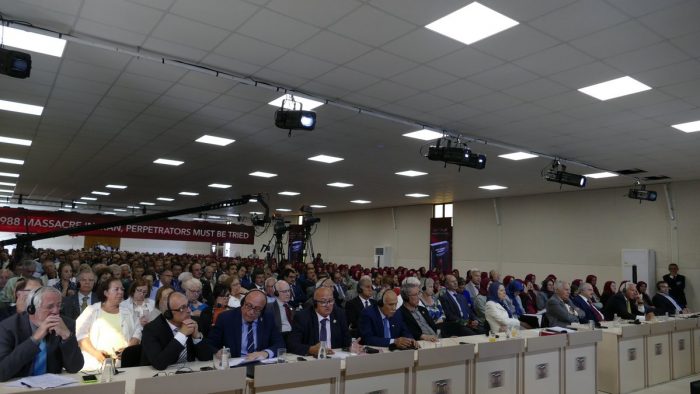 Maryam Rajavi, the president-elect of the Iranian opposition, addressing a crowed of MEK members and distinguished politicians on the 1988 massacre of 30,000 political prisoners in Iran- July 15, 2019

On June 29, the Iranian Resistance leader Maryam Rajavi, president-elect of the National Council of Resistance of Iran (NCRI) delivered a speech to visiting lawmakers from throughout the world, at the Albanian headquarters of the People’s Mojahedin Organization of Iran (PMOI/MEK). It was the most significant international gathering at the compound (Ashraf3) since it was established following the evacuation of the group’s former community in Iraq, which had been under fire for years from forces aligned with Iran’s theocratic regime.

The successful relocation of all of the camp’s 3,000 residents was regarded as a triumph by the MEK, insofar as it provided a new, more stable base of operations for the global effort to remove the existing regime and establish a democratic system in its place. Last month’s speech was an opportunity for Mrs. Rajavi to emphasize the practical outlook for that project and to encourage the international community to continue pursuing the type of assertive foreign policy that was on display when the United States and the United Nations stood up to Iran over the issue of the MEK and its members residing in camp Ashraf in Iraq.

The effort to relocate those people to what is now known as “Ashraf 3” was a modest beginning to more confrontational dealings with the Islamic Republic. But as Mrs. Rajavi explained in her remarks, the world had a long way to go to reverse a decades-long strategy of conciliation and “appeasement.” It still does, although the Trump White House has done a great deal to help demonstrate the potential effect of putting pressure on the regime instead of negotiating with it in the vain hope that its behavior will someday change.

“Imagine for a moment, what would have happened if such a disastrous policy would not have been adopted from the outset,” she said to a crowd of MEK members and visiting supporters before outlining a wide variety of malign activities that were enabled in large part by Western powers’ preoccupation with reaching out to so-called moderates within the regime. The prime target of this effort, in recent years, was President Hassan Rouhani, but his progressive-sounding campaign promises were belied by his previous dealings with the West and his proven disregard for human rights issues.

Like many of those who played a major role in Iran’s government in the years following the 1979 revolution, Rouhani was aware of many of the killings and other crimes that were carried out in the interest of silencing dissent against the fledgling theocracy. As a Member of Parliament and Secretary of the Supreme National Security Council, Rouhani was in a position to press for an end to these crimes or at least speak out against them. Yet he consistently demonstrated complicity, even when “death commissions” began the mass execution of political prisoners in 1988.

That dark stain on Iran’s history, with its estimated death toll of 30,000 over just a few months, was the first thing mentioned by Mrs. Rajavi when she listed all that could have been prevented by more assertive Western policies. Sadly, not only did lawmakers and Western media largely ignore warnings about what was happening in 1988, they learned hardly anything about the regime in the aftermath. The world should have recognized the futility of appealing to “moderates” when it became clear that the few who objected to mass killing were driven out of the system, while those who participated were rewarded for the rest of their political careers.

In 1988, Hossein Ali Montazeri was next in line to be Supreme Leader of the Islamic Republic. But after he warned his fellow officials that they would be remembered as criminals for facilitating thousands of politically motivated executions, he not only was shunned by the regime but went on to spend the last years of his life under house arrest.

By contrast, one of the main architects of the killings, Ebrahim Raisi, was appointed by Supreme Leader Ali Khamenei earlier this year to head the entire nation’s judiciary. Two other members of the “death commissions” were appointed by Rouhani to head the Ministry of Justice during each of his successive terms. This should tell lawmakers throughout the world all they need to know about Tehran’s view of human rights, about Rouhani’s moderate credentials, and about the future the Iranian people will face if the international community continues trying to elevate such figures while promoting a slow pathway to reform.

There are only two realistic outcomes for the Islamic Republic: maintenance of the status quo as advocated by the authors of “appeasement,” or sudden, transformative change of the sort championed by the MEK and its allies in the NCRI.

The fact is that constructive dialogue with the mullahs does not work. Even the 2015 nuclear agreement demonstrated this, as the regime’s acceptance of modest, easily reversible restrictions on its nuclear program produced a financial windfall that has since been used to accelerate missile development, violent intervention into the affairs of surrounding nations, and ultimately, the nuclear program itself. In recent days, the supposedly moderate Rouhani has personally expressed about his intention to oversee uranium enrichment in “any amount” desired. This only underscores the lack of restrictions put in place by negotiators for whom conciliation has long since become the norm.

But there were clear warning signs about Rouhani’s duplicity in this, as well. When he served as Tehran’s chief nuclear negotiator between 2003 and 2005, he publicly bragged about creating a “calm environment” in which the regime could accelerate its nuclear development while giving the impression that it was preparing to wind down.

The regime is giving no such impression now, and its open hostility can only be explained by its well-learned confidence that the world will not do anything to stop it. Notwithstanding the Ashrafis’ relocation and the effective economic pressure being exerted by the US, the world community as a whole has shown little interest in severing ties with Iran or adopting the strategy of “maximum pressure,” even in the wake of direct attacks on oil tankers and a US drone, and proxy attacks on pipelines, airports, and more.

The most serious action that the European Union has taken over the past year is to sanction Iran’s secret service and some of its known operatives. All it took was for France, Albania, and other nations to be directly threatened by bomb and assassination plots targeting Iranian opposition activists. Considering what those plots say about the political climate inside the Islamic Republic and the potential for more killings on the scale of 1988, it is shocking that the international community is so hesitant to go at least as far as the White House has done, by sanctioning the office of the supreme leader and designating the Islamic Revolutionary Guard Corps as a terrorist organization.

If they were to do so, the Europeans would go a long way toward promoting the sudden, transformative change that represents Iran’s only hope for a free and democratic future. Last year, a nationwide mass uprising led by the MEK demonstrated that the people of that country are ready to take it upon themselves to bring this about. All they need is the international support that has been almost always withheld throughout the past four decades.