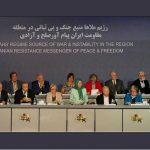 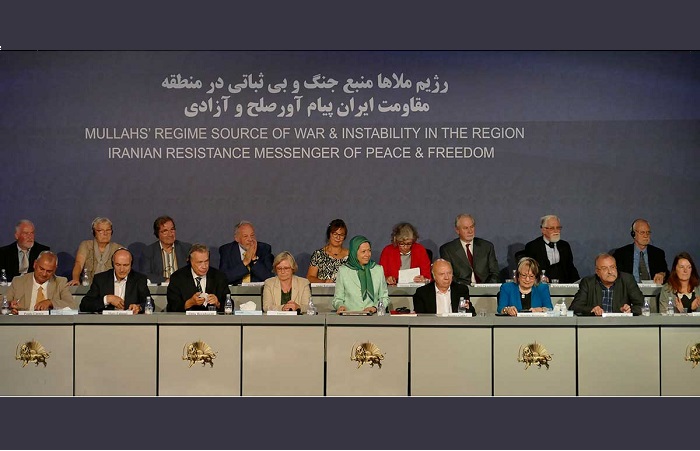 International Conference in Ashraf 3 titled, “Mullahs’ regime source of war and instability in the region-Iranian resistance messenger of peace and freedom”-June 29, 2019

The MEK hosted an international conference on Saturday at their headquarters in Albania, Ashraf 3. The conference was entitled “Mullahs’ regime, source of war and instability in the region; Iranian Resistance, messenger of peace and freedom” and included speeches by European and Australian parliamentarians, politicians, lawyers, and religious figures. 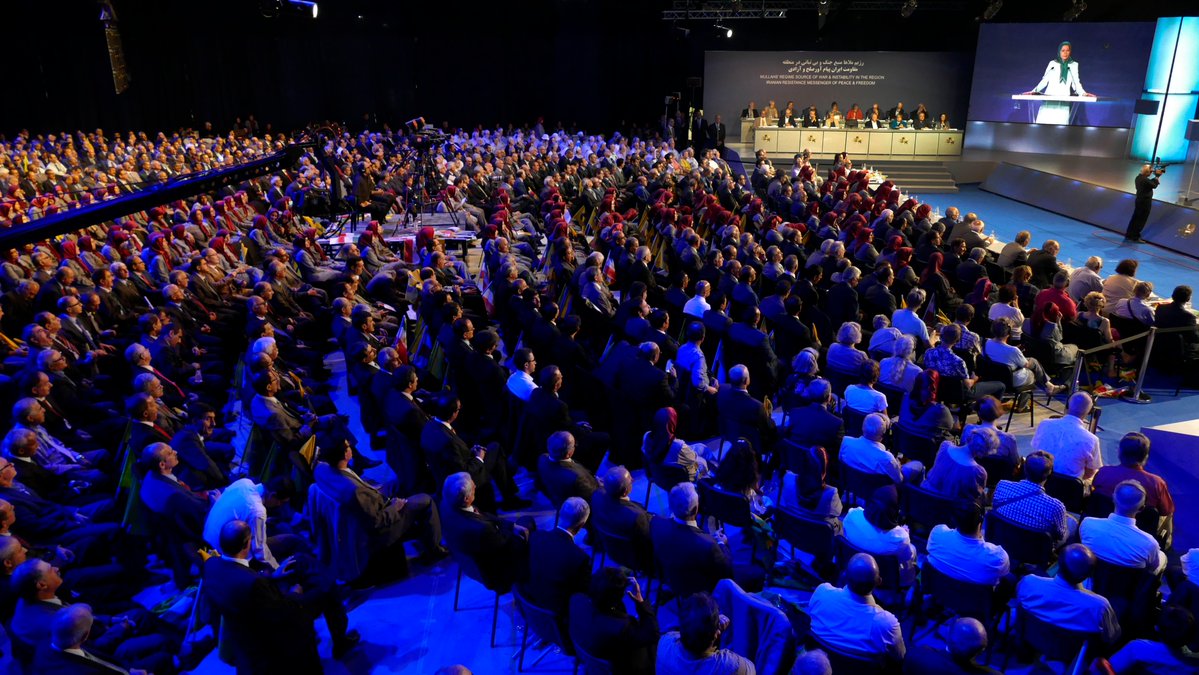 An international delegation visited Ashraf 3, the MEK headquarters in Albania, in conjunction with the conference.

Speakers at the conference expressed solidarity with the Iranian people and their desire to end the mullahs’ rule, and they stated their support for the MEK and the National Council of Resistance of Iran (NCRI) as the viable democratic alternative to the theocratic regime currently in power. They also condemned the regime for its terrorist activities and destabilization of the Middle East, as well as its gross human rights violations against the Iranian people, and called for a firm policy to hold the regime accountable for its actions.

Mrs. Maryam Rajavi gave the keynote address at the conference. Her speech was a fiery condemnation of the regime and the policy of appeasement, coupled with an appeal to the international community to take a firm stance against the Iranian regime.

She thanked the international dignitaries in attendance, noting that their presence at Ashraf 3 “sends a message of solidarity to the people of Iran who are fed up with the ruling theocracy, and are poised to topple it.”

Mrs. Rajavi described Iran’s aggressive actions over the past few weeks, which have included attacks on four commercial ships, the destruction of two major oil pipelines in Saudi Arabia, a rocket attack intended for the U.S. Embassy in Baghdad, missile attacks on airports in Saudi Arabia, and an attack on a Japanese tanker during a diplomatic visit by Japanese Prime Minister Shinzo Abe. The latest act of aggression came when the Islamic Revolutionary Guards Corps (IRGC) shot down a U.S. drone over international airspace.

An assortment of regime apologists, lobbyists, operatives and agents, who for years had accused the Iranian Resistance and their freedom-loving and humanitarian supporters of being warmongers. #Iran #FreeIran pic.twitter.com/MFOtNzddpY

She noted the hypocrisy of those who have accused the Iranian Resistance of trying to push the U.S. into waging war with Iran in the past. “For their part, an assortment of regime apologists, lobbyists, operatives and agents, who for years had accused the Iranian Resistance and their freedom-loving and humanitarian supporters of being warmongers, claimed that those advocating for human rights and freedom in Iran seek to lure the U.S. to wage war. What a disgraceful lie!” she said.

I must emphasize that, even if prompted by economic interests, providing unsparing and unilateral support to the ruling theocracy, to the detriment of the people of #Iran, is short-sighted, without a political equilibrium, and without a future. #FreeIranhttps://t.co/IzCrUGIsJa pic.twitter.com/2S6IgcVgm3

Mrs. Rajavi asked, “Now, have these attacks made it clear to proponents of appeasement that the Iranian regime is the very source of conflict in the Middle East? Or this time, do they want to give the mullahs a peace prize?” 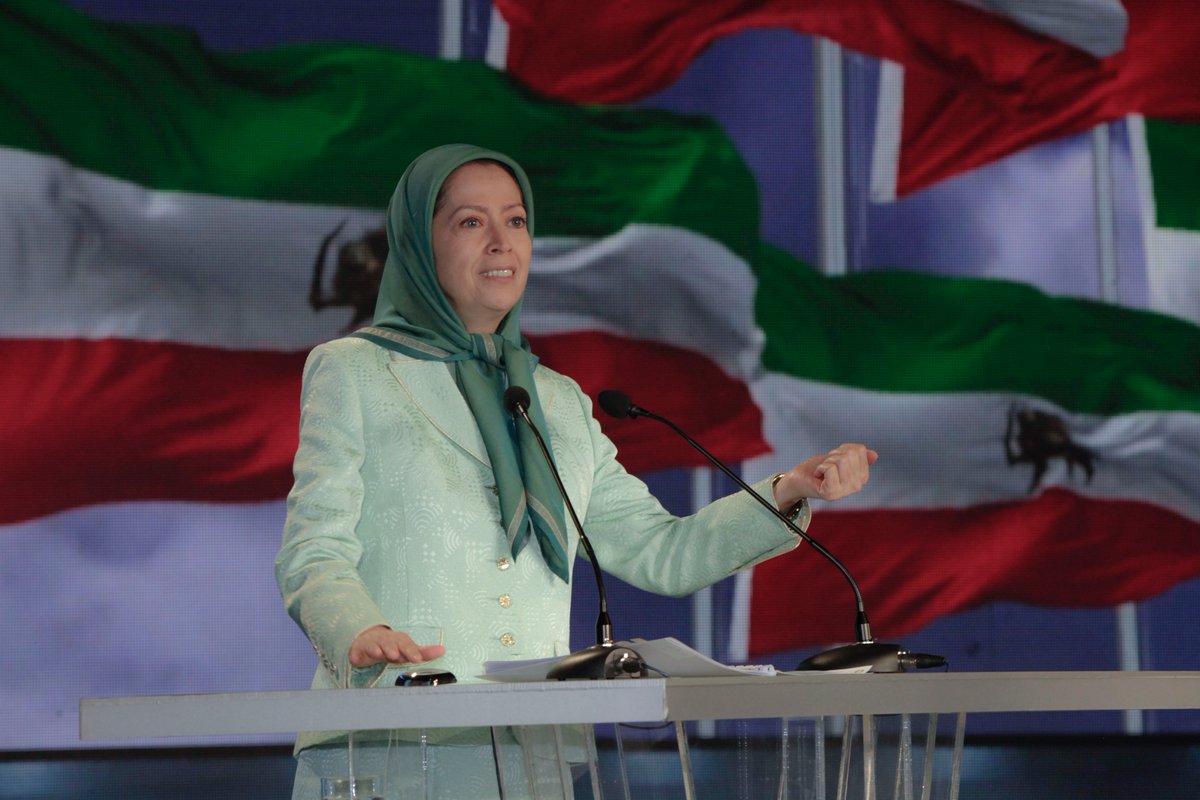 The president-elect of the Iranian opposition, addressing the International conference at MEK’s compound, Ashraf 3 in Albania- June 2019

Mrs. Rajavi questioned why European governments have remained silent about the fate of Iranian political prisoners who were arrested for their participation in the December 2017 uprisings.

“During your visit to Tehran when you were taking selfies with regime officials, should you not have at least asked the regime’s president Rouhani to allow you to visit, albeit symbolically, the prisons?” she asked.

Mrs. Rajavi said that the Iranian regime’s attempts to suppress dissent have had the opposite effect. Iran is now a “powder keg” of protests, and the MEK Resistance Units have become a powerful force within the country.

“This explosive situation has compelled the mullahs to resort to crisis-manufacturing,” she said, reminding her audience that regime Supreme Leader Khamenei described the wars in Syria, Yemen, and Lebanon as “an important part of the regime’s security.”

“He and other regime leaders have repeatedly acknowledged that without waging wars abroad, they would have to confront the arisen people of Iran “in Kermanshah and Hamedan” or “in Sistan, Azerbaijan, Shiraz, and Isfahan,” Rajavi added.

Failure of the Iran Nuclear Deal

Mrs. Rajavi then turned her focus to the Iran nuclear deal. “Political and commercial partners of the mullahs’ rule on both sides of the Atlantic deliberately cover up the obvious reality that the regime’s warmongering intensified after the July 2015 nuclear accord,” she said.

Political and commercial partners of the mullahs’ rule on both sides of the Atlantic deliberately cover up the obvious reality that the regime’s warmongering intensified after the July 2015 nuclear accord.#FreeIran #Iranhttps://t.co/IzCrUGIsJa

“On the day of the signing of that agreement, I emphasized on behalf of the Iranian Resistance, that in order to avoid war in the region, the P5+1 ‘should … firmly insist on evicting the regime from the Middle East and prevent its interferences all over the region. This is a fundamental necessity that needs to be included in any agreement as a foundational principle.’”

Mrs. Rajavi stated that she had renewed her concerns in December of 2017, telling European Parliament that “if the ruling religious fascism is not dealt with decisively, it would inflict a deadly conflict on the region and the world.”

Rajavi then described the many times that the Iranian regime violated the deal since 2017, test-firing missiles, distributing weapons to terrorist proxies, and firing ballistic weapons at Saudi Arabia.

She also pointed out that by furthering the policy of appeasement, Europe was allowing the mullahs to continue their bloody wars in Syria and Yemen and their growing meddling in Iraq. 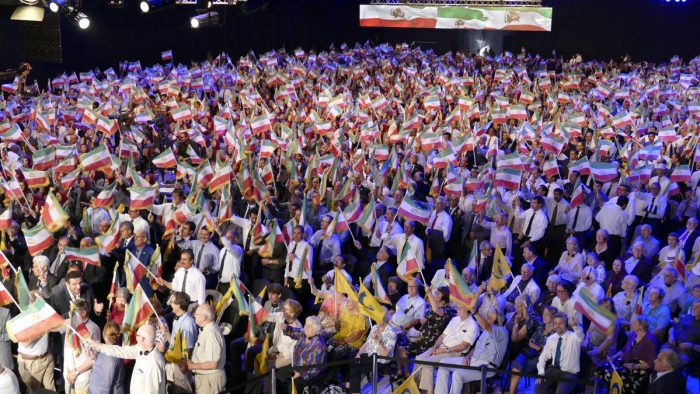 They are also complicit in the regime’s demonization campaign against the MEK, which included a series of attempted terrorist attacks on European soil in 2018.

Mrs. Rajavi went on to emphasize that the Iranian regime is not acting from a position of power but from “a hollow show of force.”

“In reality, the mullahs do not have a reliable military force, and they lack popular support and a sound economic system,” she said.

“At home, the mullahs derive their ‘power’ from executing, torturing and suppressing the defenseless population. Abroad, they act with impunity because no one has challenged their warmongering and terrorism.”

Mrs. Rajavi reiterated that “overthrowing this regime is the sole responsibility of the Iranian people, the great army of liberation, the Resistance and Units of Rebellion.”

The overarching theme of Mrs. Rajavi’s speech was the danger of continuing the policy of appeasement, and she spent a portion of her address specifically reaffirming this message.

“The policy of appeasement has portrayed the mullahs’ empty rhetoric and warmongering as a reflection of their power,” she said.

“And finally, this is a policy that has deliberately turned a blind eye to the de facto war the regime has been waging against other countries in the region,” Mrs. Rajavi added.

Rajavi urged European leaders not to repeat the damage done to the Iranian people by making concessions to the mullahs again. She said anyone partnering with the regime to circumvent sanctions was complicit in preserving their dictatorship.

Mrs. Rajavi closed her speech with several calls to action.

“Blacklisting the corrupt and vicious core of the regime, the Office of the Supreme Leader Khamenei, which took place after a three-decade delay, has been welcomed by the Iranian public. The blacklisting must be extended to the regime’s president, Hassan Rouhani,” she said.

“The UN Security Council must declare that the clerical regime in Iran is a threat to global peace and security,” she went on.

Blacklisting the corrupt and vicious core of the regime, the Office of the Supreme Leader Khamenei has been welcomed by the Iranian public. The blacklisting must be extended to the regime’s president, Hassan Rouhani. #Iran#FreeIran pic.twitter.com/RfO6Gl4V79

“The dossier of human rights abuses and massacre of political prisoners in Iran must be referred to the UN Security Council and international tribunals,” Mrs. Rajavi continued.

“We call on all countries to join the international front against the religious fascism,” she said.

“The International community, and specifically the European Union, must recognize that resistance is the Iranian people’s right to establish the sovereignty of the people of Iran,” she concluded.