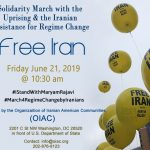 Marches in Brussels and Washington D.C. Call on the International Community to Acknowledge the Situation in Iran 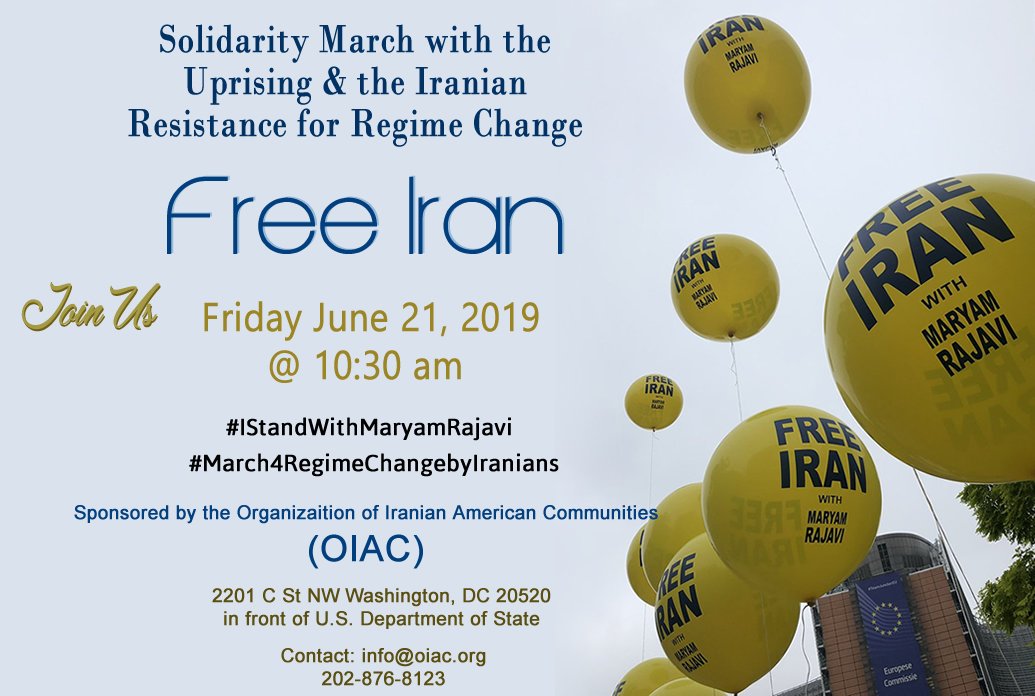 Free Iran Rallies, call on the world community to say the people of Iran ask for regime change in Iran and that their desired democratic alternative is the National Council of Resistance of Iran (NCRI)

On June 15, thousands of members and supporters of the Iranian opposition movement will march in Brussels in support of their brothers and sisters in Iran.

A #FreeIran is within reach & regime change in Iran is near
It is imperative 2 recognize the right of the Ppl of Iran 2 resist against & overthrow the mullahs’ regime.”
Friday,June 21-10:30.Washington,DC, 22nd St. NW @StateDep#March4RegimeChangebyIranians #IStandWithMaryamRajavi pic.twitter.com/YwpyPqO6a4

The Iranian people are in the midst of a struggle against the repressive and tyrannical ruling regime. Since December 2017, Iranians from all walks of life have frequently protested in the streets to express their disgust and anger at the regime’s human rights abuses, warmongering, nuclear arms development and use of terrorism as a tool for statecraft.

Following the march in Brussels, similar protests will take place in Washington D.C. on June 21.

A Display of Solidarity

On June 15, protestors will gather opposite the European Union headquarters in Schuman Place. They will then march through central Brussels.

Former Italian Foreign Minister Giulio Terzi and former Colombian Presidential candidate Ingrid Betancourt are among those that will address the crowd, shedding light on the regime’s crimes and atrocities.

#FreeIran Huge dem of thousands of Iranian people in Brussels calling on the #EU to strenghten its policies against the theocratic regime,its #statesponsoredterrorism, #nuclearprogram, #humanrigthsviolations,to sanction #IRGC and ##Hezbollah @GlobalCRL @Mohaddessin @Maryam_Rajavi pic.twitter.com/h5yoHGxOoq

The protests mark a gesture of solidarity with members of the People’s Mujahedin Organisation of Iran (MEK / PMOI) and other opposition pro-democracy groups that are risking their lives to orchestrate anti-regime protests in Iran.

Shahin Gobadi, of the National Council of Resistance of Iran (NCRI), said: “This is the first time that a series of protests with such dimensions will continuously be organized by the Iranian Resistance and its supporters in the West.”

As the opposition movement within Iran gathers pace, the regime’s future in power looks increasingly unstable. The regime “faces an explosive society that wants its downfall,” Gobadi added.

This Time is Different

The regime has faced internal opposition before. But this time, it is different. The regime can no longer rely on a policy of appeasement from international governments. The United States, among others, is adopting a firmer stance towards the Iranian regime.

The crippling economic sanctions imposed by the Trump administration, coupled with increasing domestic unrest and a highly-motivated opposition movement, has left the regime at a critical juncture.

“All these indicate the regime is in its final phase. The series of marches by Iranians in different countries is a crucial answer to this situation,” said Gobadi.

A Fatal Flaw in the Regime’s Narrative

The regime has responded to domestic resistance in the past by cracking down on dissidents, while actively pushing a narrative to Iranians and international government that without the regime, Iran would descend into chaos. Its grip on power depends on convincing the world that there is no viable alternative to the regime’s rule.

The Regime’s Crackdown on the #MEK Only Serves to Demonstrate Its Effectiveness #IStandWithMaryamRajavi #FreeIranhttps://t.co/WWoBPvXhKJ pic.twitter.com/KxH1DucTE6

However, there is now a flaw in this narrative. The MEK has put forward a ten-point plan for the restoration of democracy in Iran. The plan acts as a roadmap to democracy and the installation of a secular, non-nuclear Iran where gender equality and religious tolerance prospers.

The expansion of the MEKs resistance units and resistance councils in the last few months demonstrate that there is extensive support within the country for the MEK’s political platform. There is now a viable alternative to the mullahs’ tyranny.

Call on the International Community

The Iranian people are making their opinions known by protesting in the streets, chanting anti-regime slogans and bearing photos of the MEK’s president-elect, Maryam Rajavi.

The protestors will demand that the EU and the international community at large hold the mullahs to account for their human rights abuses, weapons proliferation, support of Islamic extremism and state-sponsored terror campaign.

The protests will also call on the EU to follow the US’s lead and designate the regime’s Revolutionary Guards (IRGC) as an international terror organization. The designation would disrupt the flow of international funds to the organization, limiting the regime’s ability to use the group as a central pillar of repression and violence.

Fearing the end is near, the regime is lashing out at its international opponents. Iranian attacks on civilian airports in Saudi Arabia and the destruction of two oil tankers in the Gulf of Oman show that the regime will go to desperate lengths to preserve its grip on power.

RT.@Maryam_Rajavi:We call on the #EU to designate the mullahs’ Revolutionary Guard Corps (#IRGCTerrorists)& their Ministry of Intelligence (#BlacklistMOIS) as terrorist entities. #Iran regime’s mercenaries must be tried, punished&expelled.#FreeIran pic.twitter.com/v0p8S5nAKt

For this reason, a unified global response to Iranian aggression is vital. “The mullahs feel the earth shifting beneath their feet,” Gobadi said. “The failure of the policy of appeasement which is nearing its end is a nightmare for the mullahs,” he concluded. The regime can no longer ignore the calls for regime change in Iran. It is increasingly isolated on the world stage. The Iranian opposition is gathering in Tehran, Brussels, Paris, Washington D.C., New York, London and beyond. It is only a matter of time before the opposition will realize its dream of a democratic Iran.