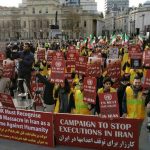 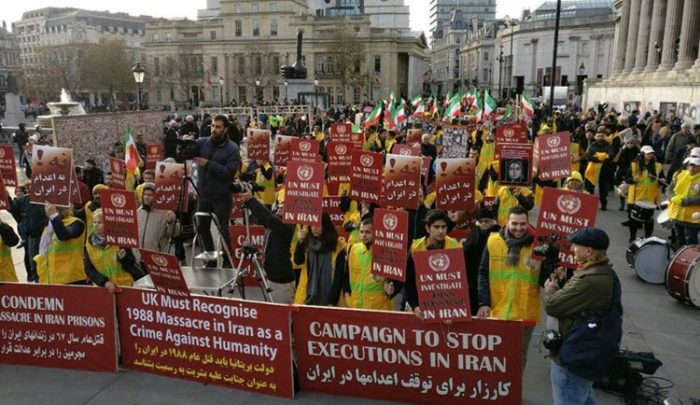 Archive photo- MEK supporters Rally in London, asking for justice for the victims of the 1988 massacre of 30,000 political prisoners in Iran – November 2016

Iran Human Rights Monitor published its monthly human rights report on Monday, which detailed the regime’s crimes against its citizens in the month of May. The report is summarized below.

Regime authorities publicly executed a man during Ramadan, despite the fact that Islam advises against execution during the holy month.

Tehran’s Revolutionary Court sentenced 34-year-old Abdullah Ghasempour to death for “waging war on God,” “assembly and collusion,” and “membership in the MEK.”

Ghasempour was arrested on May 21, 2018 for allegedly setting fire to a Basij base, filming the event, and sending the video to MEK media sources.

He was arrested along with his brother, Mohammad Hossein, Ghasempour, Alireza Habibian, and Akbar Dalir. They were each given five-and-a-half year sentences for their roles in the same incident.

20-year-old political prisoner Ameneh Zaheri Sari is being denied hospital treatment for acute swelling. Doctors in Sepidar Prison have been unable to find the cause of her illness and have recommended that she be transferred immediately to a hospital for diagnosis.

Ms. Sari’s family raised money and paid for a 300 million toman bail bond from the Court of Ahvaz, but prison officials refuse to grant her transfer.

23 prisoners in Greater Tehran Prison, Fashafoyeh are currently awaiting hand amputations as part of their sentences for theft.

Due Process Rights and Treatment of Prisoners

The regime’s Majlis (parliament) crafted a draft amendment to Iran’s Criminal Code that would deny political prisoners access to legal representation during their criminal investigations.

The amendment would apply to those arrested on “national security” charges, a vague term which is often used to imprison journalists, human rights activists, and political dissidents.

Amnesty International said that if the amendment were approved, it would be a “crushing blow to Iran’s already deeply defective justice system.”

Freedom of Expression, Association and Assembly

At least five striking workers from the Haft Tappeh sugar factory were arrested and another fifteen were summoned for questioning on May 14th, according to the ILNA news agency. The factory workers in the city of Shush were protesting their employers’ failure to provide New Year bonuses or pensions for the past two years.

Additional workers were arrested on May 14th and transferred to Dezful Prison. Reports indicate that at least six men were arrested, but the exact number is unknown.

Security forces raided a private yoga class in the city of Gorgan and arrested approximately 30 people. According to a local justice department official, the people who were arrested were wearing “inappropriate outfits” and had “behaved inappropriately.”

Authorities seized the social media accounts of three well-known street musicians for publishing “criminal content.” The musicians, who had a total of more than 174,000 followers, had posted videos of their performances on social media.

Singer Negar Moazzam is under investigation by authorities for singing to a group of tourists in Isfahan Province.

The Iran Writers’ Association (IWA) released a statement on May 16th in protest of the recent sentencing of three Iranian writers to a total of 18 years in prison. The statement described the court decision as an action “against all writers and everyone struggling for the freedom of expression.”

More than 900 writers, poets, essayists, and journalists in #Iran have condemned the recent harsh verdicts against three of their fellows as an "unjustified," and "severe damage to the fundamental rights of all Iranians" that "kills freedom."https://t.co/fSoiAQKmbh pic.twitter.com/3wwA05riH4

On May 13th, the regime’s judiciary announced that an Iranian woman who headed the British Council’s Iran desk had been sentenced to ten years in prison on charges of espionage. Although she was not named in the announcement, the British council later stated that the woman was likely Aras Amiri, an employee who was arrested in March 2018 while visiting her grandmother in Iran.

Freedom of Religion and Belief

Regime intelligence agents stormed a Presbyterian Church in the city of Tabriz last month, forcing its worshippers to leave and changing the locks. The cross on the building was taken down, and the church was forbidden to re-open.

A young Baluchi man was shot and killed by state security forces in Sistan and Baluchistan Province after chasing him down for not having a driver’s license.

Protesters gathered in front of the governor’s office in Zahedan to protest his death. Local reports say that 30 of the protesters were arrested by security forces.