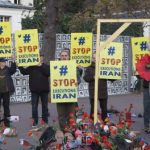 Archive photo- A rally by supporters of the MEK in Geneva, asking for an end to executions in Iran, and justice for the victims of the 1988 massacre of 30,000 political prisoners in Iran – November 2017

On Sunday, May 19th, the Revolutionary Court in Tehran sentenced four political prisoners associated with the MEK to prison sentences for their anti-regime activism. One of the four men was also given a death sentence.

Abdullah Ghassempour was sentenced to death after the completion of an eight-year prison sentence for charges of “aggression,” “assembly and collusion against the regime,” and “membership, propaganda, and cooperation with the People’s Mojahedin Organization [MEK].”

Mohammad Hossein Ghassempour (Abdullah’s brother), Alireza Habibian, and Akbar Dali were each sentenced to five-and-a-half year prison terms for “assembly and collusion against the regime.” All four men were arrested on May 21, 2018, and transferred to Tehran’s notorious Evin Prison, where they waited almost a full year before standing trial.

Tehran’s Revolutionary Court is headed by notorious regime henchman Mohammad Moghiseh, whose record of gross human rights violations against political prisoners extends back into the 1980s. During the 1988 Massacre, in which 30,000 political prisoners were executed in a single summer, Moghiseh sent scores of prisoners in Gohardasht, most of whom were MEK supporters, to their deaths. The 2001 book

Crime Against Humanity and the 2006 book

Fallen for Freedom: A List of 20,000 PMOI Martyrs both include Moghiseh among the list of perpetrators of the massacre who must be tried for crimes against humanity.

Sunday’s sentencing comes in the midst of a harsh crackdown by the regime against MEK activists. Frustrated by the growth of Resistance Units and Resistance Councils, unable to suppress the rising tide of social unrest engulfing the country, and eager to deflect attention away from the rapidly escalating economic and diplomatic chaos that threatens to destroy the faltering regime, the mullahs have targeted the MEK with widespread arrests, long prison sentences, and executions.

On April 19th, regime Minister of Intelligence Mahmoud Alavi announced that 116 teams associated with the MEK had been “dealt with” over the past year. The following week, on April 24th, the Director General of the Intelligence Ministry in East Azerbaijan Province reported that 60 MEK members in the province had been arrested and another 50 had been “briefed” in the past year.

A Call from the Iranian Resistance

The National Council of Resistance of Iran (NCRI) issued a statement calling on the Secretary-General, the High Commissioner, and the Human Rights Council of the United Nations, as well as international human rights groups to take immediate and urgent action to prevent the execution and secure the human rights of Abdullah Ghassempour and other political prisoners facing death, torture, and long-term imprisonment at the hands of the Iranian regime. It further calls for the appointment of delegations to visit Iranian prisons and meet with political prisoners there.