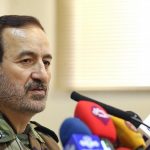 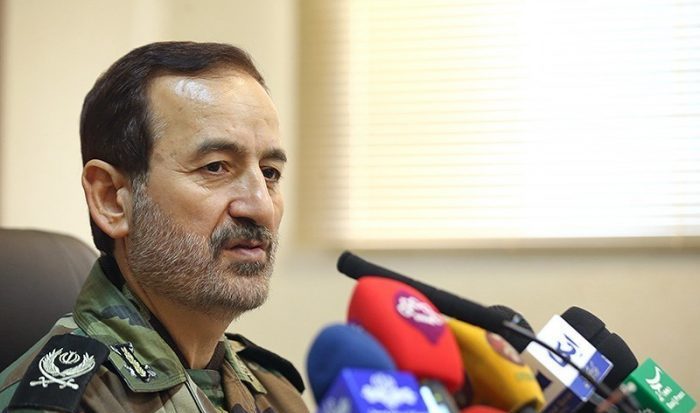 Ibrahim Golfam, head of regimes propaganda in the Army during a press conference.

So much so, that the Cultural Deputy of Iranian regime’s Armed Forces Department Ibrahim Golfam aired his concerns over the group’s rising online influence. “The [PMOI/MEK], stationed in the capital of a European country, are day and night busy creating an atmosphere against the Islamic Republic in Twitter, Instagram, and Telegram,” he complained.

Speaking to journalists in Yasuj, Southern Iran, Golfam described the ongoing war for the hearts and minds of the Iranian public. He said a “battle formation” was “needed in the fields of economics, culture and soft war.”

Golfam’s comments were echoed by the regime’s Friday prayer Imam in Shiraz. Lotfollah Dezhkam, during a sermon, complained about the MEK’s social media presence. “There are some behaviors seen on the internet that need our attention. It is not right for anyone to say anything they wish,” he said. He expressed his opinion that the regime should more closely monitor the Iranian opposition’s online presence and censor Iranians’ access to their posts.

“This is a direction that needs to be taken by FATA (Iran’s internet police) and finally the judiciary. Both of these entities need to be involved and there need to be some control mechanisms from our part,” he said.

Dezhkam also vented about the closure of the social media accounts belonging to senior members of the Iranian regime’s leadership. “They make a fuss and brouhaha about providing an open atmosphere! Free! Anyone is able to say anything they wish! You do know that they erase even one sentence that is expressed by us,” he complained, adding, “why do they not allow people to hear what they have to say? Those who close these accounts are cowards!”

In 2018, Twitter removed more than 750 accounts affiliated to the Iranian regime. Many accounts posed as foreign journalists and shared anti-MEK propaganda in an attempt to turn public opinion against the opposition group. Following this incident, Twitter and other social media platforms have scrutinized regime-affiliated accounts.