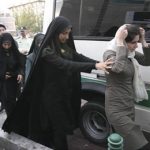 Defiant Woman Arrested for “Improper” Hijab and then Beaten in Prison 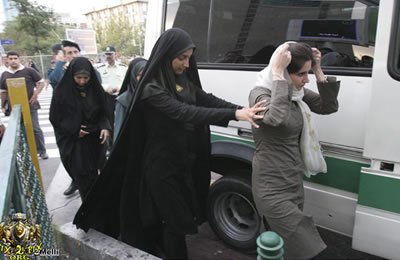 On Tuesday, February 26th, a young woman was brutally beaten in an Iranian prison and tied to the rails in the hallway of the prison for several hours as reported by Irannewswire.org and a number of other outlets.

Arrested for Not Observing Hijab

The 25-year-old woman, known only as “Zahra,” was stopped and arrested on a street in central Khoy in West Azerbaijan Province on Sunday, February 24th for a violation of the mandatory hijab.  She was then taken in front of a judge, who transferred her to prison for “arguing” with him. It is not clear what the argument entailed.

On Tuesday, February 26th, Zahra was helping another woman at the prison with her child at around 10 PM. A prison guard verbally abused her for “not observing the lights out” and claimed that she was being too loud.

Zahra argued with the guard, and then more guards arrived and brutally beat the young woman, despite the lack of physical threat posed by her. According to reports, the beating ripped Zahra’s clothes and dislodged her prosthetic leg.

After the violent beating, guards dragged Zahra to the prison hallway and tied her to the rails there. She was left in the hallway for five hours until other prisoners begged guards to release her and allow her to return to her cell to sleep.

#Iran
Female officer shown slapping woman and wrestling her to floor because her hijab was loose#پليس_داعشى pic.twitter.com/r616MWInH8

A bystander took a video of the incident, which shows the woman’s hair barely visible underneath her scarf. After the severe beating, her friend shouts that she has a heart condition and threatens to file a complaint against the female morality officer who carried out the attack. The officer responds, “You can’t do anything.”

An official of the theocratic regime claimed in January that allowing Iranian women to choose their clothing would lead to the end of the regime.

Jafar Dolatabadi, Tehran’s Chief Prosecutor said, “The enemy is trying to turn chastity and the hijab into a choice.”
He continued, “Therefore they have instigated some people to take off their hijab, trying to make their plans operational, but they were met with the decisive approach of the judiciary and the police.”

The regime has refused to take action to make Iran a safe place for women. The regime parliament refuses to raise the marriage age or pass a law criminalizing domestic violence, claiming that both laws would destroy families.

The MEK and the National Council of Resistance of Iran (NCRI) believe that the women of Iran deserve better. Mrs. Maryam Rajavi, President-elect of the NCRI, has a ten-point plan for the democratic future of Iran that includes gender equality and separation of religion and state. The women of Iran have been denied their voices for forty years. The time has come for women to take back their freedom. The MEK is proud to be part of that effort.