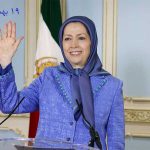 Maryam Rajavi Adresses Paris Rally: “Now Is the Time for the Mullahs to Be Overthrown” 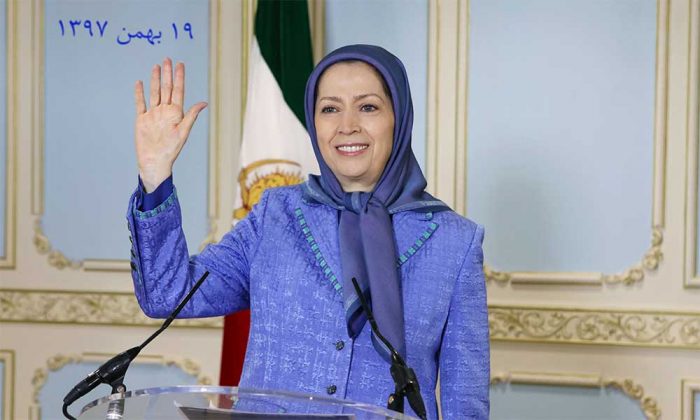 Maryam Rajavi’s message to the Free Iran Rally, the MEK supporter’s rally in Paris on the 40th anniversary of the 1979 revolution-February 8, 2019

Western governments played a role in protecting the regime esp. in the past two decades. Their appeasement policy gave it many opportunities to survive, by blocking the road to change in #Iran through suppressing, blacklisting & constraining the Iranian Resistance. #FreeIran pic.twitter.com/FAHF3WdJWQ

Mrs. Maryam Rajavi, President-elect of the National Council of Resistance of Iran (NCRI), addressed the rally’s attendees and participants, who included MEK members and other Iranian expatriates, international politicians, and human rights activists.

In her speech, Mrs. Rajavi discussed the hardships that the Iranian people have faced in their quest for freedom. She said, “Our people faced a whirlpool of horror and darkness which they had to go through in order to achieve freedom.”

The Iranian Uprising and Protest Movement

Mrs. Rajavi went on to speak about the regime’s response to the ongoing protests that have been taking place in Iran since last year. She cited reports from Amnesty International, which state that 7,000 protesters were arrested last year, noting that the actual number is even higher. She described how the regime killed some of these protesters after their arrests and claimed they had died of suicide. She further discussed the regime’s torture of detainees and its crackdown on ethnic and religious minorities, on workers, students, women, young people, and anyone who dared to defy the regime.

With the dawn of the protest movement, Mrs. Rajavi stated that Iran had entered a “new era” in its “battle to bring down the mullahs’ theocratic rule.” Subsequently, said Mrs. Rajavi, “They expect the international community to respect their struggle and recognize their high goal of liberating Iran and the entire world from the evil and mischief of the mullahs’ religious fascism.”

According to Rajavi, Western governments must pay heed to this responsibility because of their history of preserving the mullahs’ rule for the past twenty years. The Western policy of appeasement toward the mullahs allowed the regime to flourish by “cracking down on the Iranian Resistance, blacklisting it, and restricting it.” Mrs. Rajavi said that the end of the regime’s threat would only come through the recognition of the Iranian people’s right to achieve freedom. 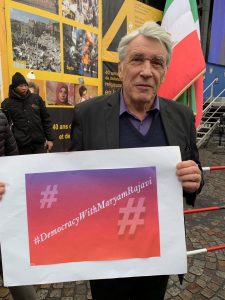 Gilbert Mitterrand
François Mitterrand’s son, one of the main speakers at MEK’s February 8, rally in Paris, posing for a photocall.
The sign reads: #DemocracyWithMaryamRajavi

Such recognition,” said Mrs. Rajavi, “lies in the heart of the solution to the Iranian problem. This is the path to freedom in Iran and the road to peace and tranquility in the region and the world.”

Mrs. Rajavi stressed the need for the United States and European Union to blacklist the Ministry of Intelligence and Security (MOIS) and the Islamic Revolutionary Guard Corps (IRGC).

She then posed a question to European and U.S. leaders: “Now, our question to those who are still persisting in their worn-out policy of appeasement of the mullahs is, ‘Why do you want to prolong the suffering of the people of Iran and other nations in the region? Is it not enough? Indeed, what does it take for you to learn your lessons from the mullahs’ savage terrorism in recent months in the heart of Europe and in the U.S.?’”

Mrs. Rajavi urged the international community to be firm with the Iranian regime. Stand up to the clerical regime and prevent their access to missile programs and any form of arms and equipment,” she said. “The Iranian people and Resistance do not want this regime to have any bullets, or sell any barrel of oil, or spend a single dollar of the Iranian nation’s wealth on suppression and terrorism.”

Mrs. Rajavi was very clear in the goals of the Iranian Resistance, including the MEK: “The objective of the Iranian people and their Resistance is to overthrow the regime in its entirety. The goal is freedom, democracy, and the sovereignty of our people’s republic.”

She emphasized, “Yes, now is the time for the mullahs to be overthrown.”