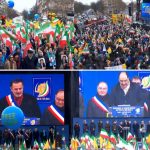 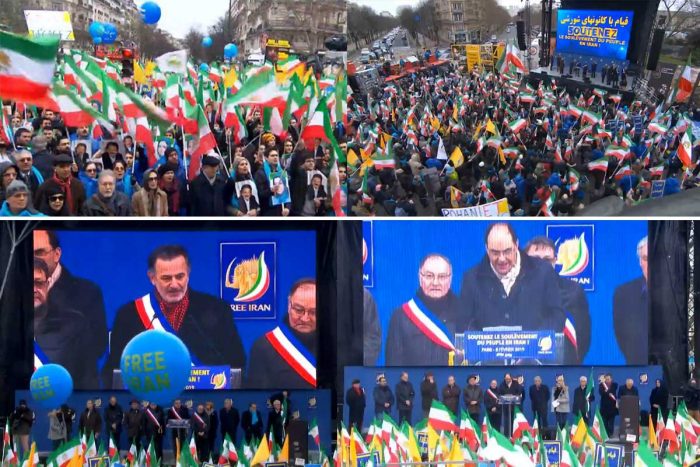 The Iranian supporters of MEK, rally in Paris to echo the voice of the Iranian people for freedom and democracy in Iran-February 8th, 2019

On Thursday, February 8th, the MEK supporters gathered for a rally and march in Paris. The event, which was organized by the French Committee in Support of Human Rights in Iran (CSDHI), was meant to draw attention to human rights violations in Iran and the Iranian regime’s terrorist activities in Europe. The demonstration that took place amid the 40th anniversary of the 1979 revolution, echoed the Iranian people’s quest for freedom and democracy in Iran. One of the main slogans was “Democracy Freedom, With Maryam Rajavi“.

Those attending the rally seek a democratic alternative and support National Council of Resistance of Iran (NCRI) President-elect Maryam Rajavi to lead Iran toward freedom and democracy.

Freedom loving Iranians from across Europe supported the uprising in #Iran and people’s “resistance units”. They chat, “We support the resistance units.”#DemocracywithMaryamRajavi#FreeIran#PolandSummit@USAdarFarsi @PolandMFA @RichardGrenell pic.twitter.com/20aXinjWAH

The timing of the rally was significant. The Warsaw Conference is set to begin in a few days. International leaders will discuss the future of Middle Eastern policy at the conference, and Iran will be a particular focus. The Iranian Resistance hoped to draw attention to the plight of the people of Iran.

The speakers at the rally expressed overwhelming support and optimism that the MEK would prevail in its efforts to create a free and democratic Iran. The following are some of the most notable quotes from the day’s speeches:

Mrs. Maryam Rajavi, President-elect of the National Council of Resistance of Iran (NCRI): “Now, our question to those who are still persisting in their worn-out policy of appeasement of the mullahs is, ‘Why do you want to prolong the suffering of the people of Iran and other nations in the region? Is it not enough? Indeed, what does it take for you to learn your lessons from the mullahs’ savage terrorism in recent months in the heart of Europe and in the U.S.?’”

The Iranian people and Resistance do not want the mullahs to have a barrel of oil, a single dollar or a single bullet. #FreeIran#Iranhttps://t.co/CQ9Fk98pOO pic.twitter.com/Vyltqh5HvU

“The objective of the Iranian people and their Resistance is to overthrow the regime in its entirety. The goal is freedom, democracy, and the sovereignty of our people’s republic.”

Jean-François Legaret, Mayor of Paris’ 1st District: “Forty years after the dictatorship of the Shah, there is another regime in power which is illegitimate.”

Gilbert Mitterrand, President of France Libertés: “We want a change of power from the mullahs to democracy. This alternative is possible, it exists, it’s there. Long live a democratic Iran!”

Sid Ahmed Ghozali, former Algerian Prime Minister: “The people of Iran ousted the Shah but were repressed by an even worse dictatorship of the mullahs. Now is a moment of hope but also a moment of danger. The mullahs act like a wounded beast. I warn our European friends that this dictatorship can even resort to more violence and terrorism.”

François Colcombet, President of the Foundation for Middle Eastern Studies (FEMO): “I have known your movement since the year of the revolution against the Shah. That revolution was stolen. We witnessed some countries being indifferent to the repression in Iran. Now we see the result. Now we hear a singer in Iran being banned from working because he gave the microphone to a female guitarist. Is this the model the European Union should support?”

Mahnaz Salimian, Secretary-General of the National Council of Resistance of Iran (NCRI): “The MEK’s Resistance Units are ready to respond to the repression of the regime. We will soon celebrate freedom and democracy in Iran.”

Jean-Pierre Michel, former French judge, and senator: “It has been said, the regime is about to fall—It will fall when it stops receiving aid.”

Alejo Vidal-Quadras, former Vice President of the European Parliament and current President of the International Committee in Search of Justice (ISJ): “The EU must stop its appeasement policies and support the Iranian opposition MEK instead of the mullahs. Appeasement only encourages the mullahs for more crimes in Iran and more terrorism in Europe.”

George Sabra, former president of the opposition Syrian National Council: “Right now, this is the biggest danger to the world. We need to put an end to the dictatorship in Iran to free the world from this menace. We need to rid the world of this regime that is the source of support for keeping the Bashar al-Assad regime in Syria in power that has killed so many in our country.”

Ali Bahrami, representative of the Iranian Kurdish Khebat organization: “The regime doesn’t limit itself to the borders of Iran. Several Kurdish activists have been assassinated in European countries.”

Michèle de Vaucouleurs, a member of France’s National Assembly: “I know you have suffered for forty years. I am with you to show that we stand by you. As a Member of Parliament, I cannot tolerate what you suffer. I know you, especially you the women, have suffered more but have great hope. And I share that hope that this year will see the end of the dictatorship in Iran.”

Azadeh Alamian, representative of the Franco-Iranian community: “The policy of appeasing the mullahs’ regime is coming to an end. We see a ruined economy as a result of massive corruption in Iran. We see the end of the dictatorship coming. We Iranian of all kinds with all our diversity have a common future very soon. We will overthrow this bloodthirsty dictatorship.”

After the speeches were finished, MEK supporters marched from Place Denfert-Rochereau towards Les Invalides, chanting, “Down with the dictatorship in Iran!” and “Free Iran with Maryam Rajavi!”