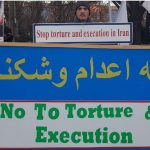 The sign held in MEK supporters’ rally in Canada, protesting the violations of human rights in Iran.

Iran News Wire recently published a report on the Iranian regime’s widespread use of torture in its four decades in power.

Thanks to the Iranian people’s Resistance & uprisings,freedom & popular sovereignty are looming in the horizon. The day is not far when the Iranian people will be able to live free from the menace of executions & torture & #Iran will become a garden blessed with freedom & justice pic.twitter.com/wFlBYAgHtu

Despite the regime adamantly denying using torture methods, the report highlighted the role flogging plays in the Iranian penal code. The clerical regime has made flogging a punishment for more than 100 offenses. The punishment method has been entrenched in the regime’s justice system and dished out in a multitude of cases.

#Iran Under the regime’s laws, at least 148 crimes are punishable by flogging and 20 others are punishable by amputation. Sentences which are considered torture by human rights defenders and the international law.#IranRagimeChange https://t.co/48Icr4O0GB pic.twitter.com/cuSoB5A3nu

Torture as an Interrogation Method

Iran News Wire reported that torture has been used in interrogations since the 1980s. Reports have consistently shown that regime agents routinely use physical torture methods to force confessions from prisoners.

The Iranian public also has limited legal protections and recourses available should they receive torture at the hands of the regime. They are unable to take their complaints to any legal authority and the regime is free to carry out torture without ramification.

Esmail Bakshi, a labor activist who recently recounted the torture he experienced in regime custody, is now facing charges from the regime for publicly reporting his ordeal. The activist told the world in an Instagram post that regime agents tortured him “to the brink of death,” over a period of thirty days.

Torture and Execution in the 1980s

In the early days of the Islamic Republic, the regime adopted violent and abusive torture methods. In 1988, the regime tortured and executed more than 30,000 political prisoners, mainly supporters of the People’s Mujahedin Organisation of Iran (MEK), a political opposition group.

#Iran:#Torture &other illtreatment of detainees remained common especially during interrogation, and was used primarily to force confessions pic.twitter.com/dVpsa9WxDq

In a recent report from Amnesty International, investigators concluded, “by concealing the fate and whereabouts of thousands of political dissidents who were forcibly disappeared and secretly executed in prison 30 years ago, Iranian authorities are continuing to commit crimes against humanity.”

Those that were in regime custody in the 1980s have frequently called the period one of the darkest times in regime history. Torture was widespread and often brutal. Women reported being systematically raped before their execution.

Torture in the 21st Century

In the early 2000s, students became the object of much of the regime’s brutality and violence. Following a wave of student protests, many Iranian students were imprisoned and held in regime custody. Many have since shared their memories of torture and abuse at the hands of the regime’s agents.

In 2009, after protests erupted following contested elections, many activists and members of the Iranian resistance were arrested and taken to Kahrizak Detention Centre. There, many were raped, sexually abused, and physically and psychologically tortured.

With a capacity of 50 prisoners, Kahrizak was filled with hundreds of inmates. Eyewitnesses report limited ventilation and toilet facilities. They recount that guards beat them with metal bars, electrocuted them, sexually abused them with batons, and forced them to urinate on other bound prisoners.

More recently, since 2010, the rise of technology has offered an even clearer glimpse into the regime’s use of torture. Those detained are able to write about their experiences in online blogs.

These blogs have indicated that the regime has focused its energies on psychological torture methods in recent years. It has routine employed sustained solitary confinement as a torture method, as well as the harassment of families of those imprisoned.

Agents have withheld medical treatment, including for those suffering from cancer. Rape is also still widely used as an intimidation and torture method.

Following the nationwide uprising in December 2017 and January 2018, dozens of prisoners perished in regime custody while undergoing torture. The regime attempted to hide their murders by claiming the prisoners were drug addicts and had committed suicide in prison, however, few have been persuaded by this narrative.

After 40 years, Iran’s citizens are tired of the regime’s rampant use of torture and human rights abuses. They are making their voices heard and standing up to this brutal and abhorrent regime.