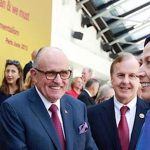 Former US Homeland Security Secretary: The EU “Must Take Steps to Underscore the Existing Regime’s Illegitimacy 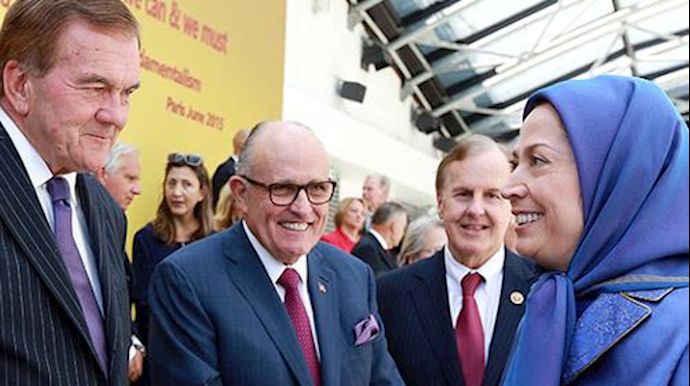 Tom Ridge, Rudy Guiliani and Representative Robert Pittenger greet Maryam Rajavi – leader of Iran opposition as she joins them at the annual gathering of the MEK in Paris-June 2015

Tom Ridge, the former US Homeland Security Secretary (2001-2003) reiterated the threat the Iranian regime poses to democracies and called for a coordinated strategy from the European Union (EU) in addressing the Iranian threat. In an article published in the National Interest on Sunday, February 3rd, 2019, Ridge said:

“In January German authorities arrested an Afghan-German dual national for spying on behalf of the Iranian intelligence agency. The incident was far from the first, and only underscored the potential threat lurking behind each new revelation.”

#Germany Arrests German-Afghan Army Adviser For 'Spying For #Iran'
Germany on Tuesday detained a German-Afghan man on suspicion he was spying for Iran while working for the German army as a linguistic and cultural adviser. pic.twitter.com/kPSHsWIKlR

There has been a surge in Iranian state-sponsored terrorism and intelligence operations over the last 13 months. In June, in what surmounted to one of the most high-profile plots, an Iranian diplomat was arrested in connection with a plot to bomb the People’s Mujahedin Organisation of Iran’s (MEK’s) annual Grand Gathering event in Paris.

In March, two regime agents were arrested in Albania after targeting the Iranian opposition group once again. The agents had been monitoring the MEK’s compound outside the Albanian capital of Tirana with the intention of carrying out a terror attack during the Persian New Year celebrations.

Targeting the heart of the Iranian opposition

The MEK has always been the target of the regime’s ire but this has surged since the nationwide protests that broke out in Iran in January 2018. The protests quickly spread to more than 140 towns and cities in all 31 of Iran’s provinces.

The regime holds the MEK, a pro-democracy group, responsible. The MEK was instrumental in the protest’s organisation and communicated the plans with pro-democracy elements across Iran.

The MEK’s effectiveness and its central role in the Iranian opposition movement have made it a target for regime terror attacks. In addition to the Paris and Albania attacks, there have been assassination attempts, and murders carried out against MEK members.

Despite the Iranian regime’s numerous plots to kill and main MEK officials on European soil, the political backlash has been muted. France and Albania both expelled diplomats in the wake of the foiled plots, however, the EU has been reluctant to follow the US in adopting sanctions against the regime, rights Tom Ridge in his article.

The EU announced last month that it would introduce new sanctions targeting a branch of the Iranian Ministry of Intelligence (MOIS), but critics “do not believe they go nearly far enough,” Ridges writes.

“We know for a fact that there are ongoing conspiracies to spy on European entities and set the stage for further terrorist attacks,” Ridges asserts, “making it absolutely imperative for the EU and broader international community to address the issue.”

“Any solution must confront the Islamic Republic on multiple fronts,” he continued. The regime is forging closer bonds with extremist groups like the Taliban, Hezbollah and the Houthis in Yemen. If it is sharing the information it has collected through spies in Europe and the US with these groups, the consequences could be catastrophic.

Desperate measures at home and abroad

In addition to the regime’s violent and aggressive activities abroad, it is intensifying its repressive and bloody policies at home.

Following nationwide protests, the regime has launched a crackdown against the political opposition within Iran. The regime has arrested thousands of protestors and executed political prisoners, but the protest movement shows no sign of losing its momentum.

Ridges argues that a coordinated strategy from the international community that attempts to modify the regime’s behavior both at home and abroad is the best way to reduce conflict and increase global stability.

When world leaders meet on February 13th and 14th in Warsaw, Ridges argues, they have the opportunity to construct a coordinated response to Iranian aggression. “The Warsaw summit could go a long way towards developing a coordinated strategy to contain Iran,” he says, “but no strategy would be complete unless it also reaches out to, and coordinates with, Iran’s organized domestic opposition;” the MEK.

Ridges concludes that the EU, “must take steps to underscore the existing regime’s illegitimacy. There is no better way to do that than standing behind the regime’s most active domestic opponents.”