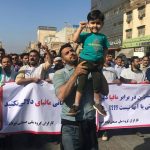 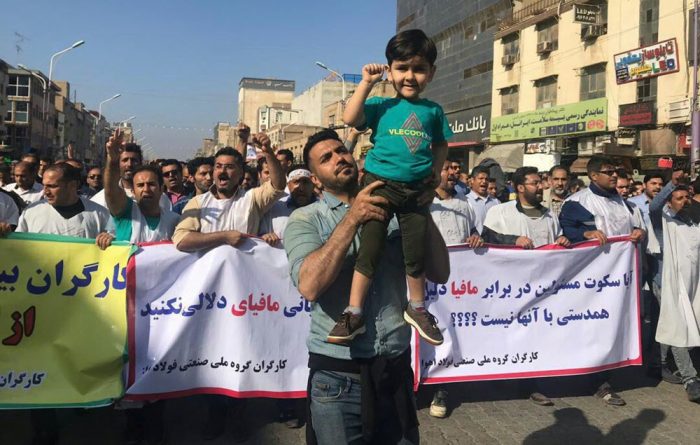 Reports from the MEK sources inside Iran indicate that workers from the Ahvaz National Steel Industrial Group reached the 32nd day of their strike on Tuesday. The steelworkers, who are striking in protest of months of unpaid wages, are struggling financially, and many of them have been forced to sell their homes in order to make ends meet.

The state-run ILNA news agency reported that the steelworkers of the Ahvaz National Steel Industrial Group faced financial hardships even before the strikes due to their wages not being paid consistently or on time.

#Iran, Ahvaz: Workers of the National Steel Group rallying for the 32nd day in protest to unpaid wages, the privatization of the company and the arrest of labor activists. Workers are wearing burial shrouds to indicate that they will stand till death. #IranProtests pic.twitter.com/Hr6PU8OMB9

The steelworkers have also demanded that their employers establish all production lines and supply necessary equipment and parts. In addition, they are asking that the factory he returned to government control. The steelworkers have seen conditions at the factory worsen under the direction of private investors, most of whom are connected to the regime, and who operate without any oversight.

The Ahvaz Steel factory is located in Khuzestan Province, where most workers have large families, due to the dominant culture in the region. Iran is in the midst of an economic crisis, which has caused inflation and the price of goods to skyrocket.

Most of the steelworkers do not have homes to sell. They can not pay for basic needs, such as rent, utilities, medical bills, and education expenses for their children

According to ILNA, these factors, combined with the workers’ unstable wages, have driven the steelworkers of Ahvaz and their families out of their homes.

On Tuesday, the workers gathered in front of the Khuzestan Province governorate, holding banners which read, “Workers are awake and tired of being exploited!”

The Steelworkers also protested in front of the Jazayeri mosque. The demonstrators wore grave shrouds, which symbolizes their commitment to stand up for their cause no matter the cost.

Protesters in Iran have begun to wear grave shrouds at anti-regime protests as the workers’ strikes and protests have gained momentum. Also Maryam Rajavi, the Iranian opposition leader has urged the people of Ahvaz and particularly the youth to join the workers in unity.

The strike and protests of the steel workers of #Ahvaz entered its second month. I urge the people of Ahvaz and their brave youths to join them in unity. #Iran#IranProtests #FreeIran2018#IranRegimeChange

The MEK and the Iranian Opposition supports these protests and calls upon the Iranian people to stand with the striking workers in solidarity.