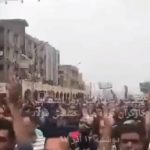 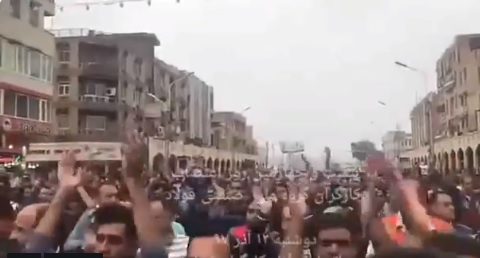 The protest by thousands of Steelworkers in Ahvaz continues.

Monday marked the 24th day of protests for the workers of the Iran National Steel Industrial Group in Ahvaz, Khuzestan, report MEK sources inside Iran. The workers once again rallied in the streets of Ahvaz to demand payment of their wages, which they have not received for several months.

Chants:
"We steel workers will stand against cruelty & oppression"
”Neither the ruler [Khamenei], nor the gov [Rouhani], are thinking about the people"
"You're using Islam to plunder the people" pic.twitter.com/BKchHEC9fL

The protesting workers held banners reading, “The workers are awake, they are fed up with exploitation!” and “Don’t make workers the victims of mafia deals!”

The Ahvaz steelworkers have demanded their unpaid wages for months, but they have been ignored by both their employers and the Iranian regime. The workers have now been forced to strike in order to make their voices heard.

The regime has responded to the protests with threats and intimidation. The head of the regime’s judiciary threatened to arrest the striking workers, calling their protests “sedition.” Nevertheless, the steelworkers have continued to rally on the streets of Ahvaz for more than three weeks to demand payment for their work.

Regime officials recently announced that two months of wages had been deposited into the workers’ accounts. However, according to the state-run ILNA new agency, workers reported that only 120 workers were paid. The 3,500 striking workers did not receive their wages.

The Ahvaz steelworkers place the blame for their situation on the regime and its corrupt policies. They are among many groups of oppressed Iranian workers who are suffering from the Iranian regime’s corruption. The workers of the Haft Tappeh sugar factory in Shush, Khuzestan have been protesting for their unpaid wages for 29 days. The factory workers blame the regime for allowing the privatization of their company, which has nearly bankrupted it.

As the strikes have gone on, the striking workers have gained support from the Iranian people and from human rights activists and labor rights groups across the world. MEK sources report that students have joined the steel workers’ protests. Students were seen holding signs reading, ““We’re the workers’ children; we’ll stand by their side!”

Regime officials have been forced to acknowledge that workers in Iran are unhappy with labor conditions in the country. State media has run a number of reports about the regime’s deep concerns that the workers’ dissatisfaction will lead to a large scale revolt led by the MEK.