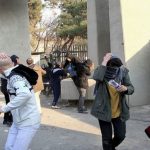 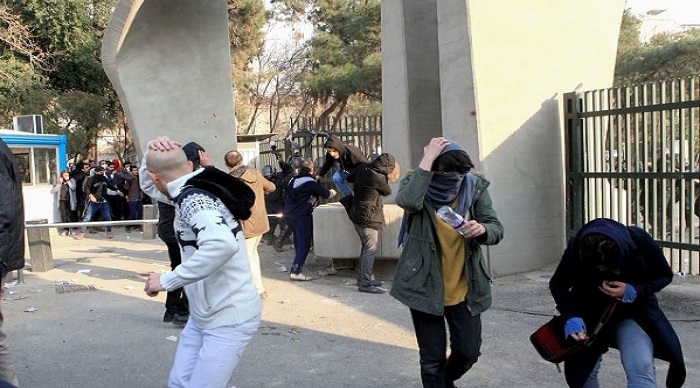 Archive photo: University students retaliating as soon as the repressive IRGC and Basij forces attack them, during one of the protests in Tehran- December-2017

The Iranian regime has found itself in an unsustainable position. The economy is in a downward spiral, a rising tide of protests has swept the country, and the mullahs’ attempts to suppress the uprisings have backfired and drawn more Iranians out into the streets to protest against the corrupt and brutal regime.

Officials within the ruling government are now openly voicing their concerns that the regime will not be able to suppress dissent and re-establish control over the people of Iran. The MEK and its Resistance Units have been effective in organizing protests and sharing information among its expansive network, causing protests to spread quickly across the country. There has been a great deal of internal division within the regime within the past year, but regime leaders agree that the MEK poses the greatest threat to the theocratic dictatorship.

In a recent interview on state-run media, senior Revolutionary Guards member Hassan Abbasi discussed the recent outbreak of protests and their causes in grim terms. “The problem is, in the next few years, our currency will become so worthless that people will pour into the streets because of the hardships to their livelihoods,” Abbasi said. “Clashes will ensue, people will distance themselves from the government and confront the government. The government will confront the people. A few people will be killed, and then the people will rise in revenge.”

Abbasi, who is from the hardliner faction of the Iranian regime, predicted that the MEK would play a larger role in the protests as tensions between the people and the regime continue to grow. Although he espoused a number of conspiracy theories as part of his argument, he did admit that the Iranian people have real concerns that have not been addressed by the regime. “The people are protesting for their rights, their rights to water, their rights to the security of their financial assets, their unpaid wages,” he said.

Nov 9, Isfahan #Iran
The deprived farmers of Varzaneh in Isfahan, started their protest who have been protesting the regime's refusal to give their water rights gathered in front of the Benroud Province. They say the governor does not do anything for the farmers.#IranProtests pic.twitter.com/iy0iiaXJzN

In an interview with the same TV station, regime theorist Mohammad Reza Khatami, who is the brother of former “reformist” president Mohammad Khatami, admitted that most of the country is unhappy with the ruling regime and expressed his fear about the regime’s collapse. “Possibly the majority of the people have grievances and criticism,” he warned. “Ordinary people might say that we are fed up with this system and we want another system. But how? With whom?”

Khatami acknowledged that regime change would invariably involve the MEK. “Why am I opposed to regime change? We want the MEK to come and change our regime? Under the current circumstance, I see a very dark future,” he warned.

Khatami also made the long-overdue admission that the occupation of the U.S. Embassy in Tehran after the 1979 revolution was a plot to gain support for the mullahs by making the regime appear to be anti-imperialist and to undermine the influence of revolutionary forces such as the MEK.

.@Maryam_Rajavi hails the strikers and says that as long as this regime is in power, poverty, inflation and unemployment will continue Continued strike & protest of truckers, workers, merchants and farmers in different cities of the country. #IranProtests https://t.co/Aq2RG94CgY pic.twitter.com/HENPg6RGPJ

The regime is rapidly losing its grip on power, and its leaders are well aware that it is close to being toppled. The MEK is leading the Resistance movement and gains support, knowledge, and strength each day. It is not surprising that the regime has spent the past year planning failed terrorist attacks against the MEK, spying on its members, and using every measure of suppression available to punish protesters. These are acts of a terrified regime at the end of its reign of terror.