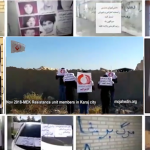 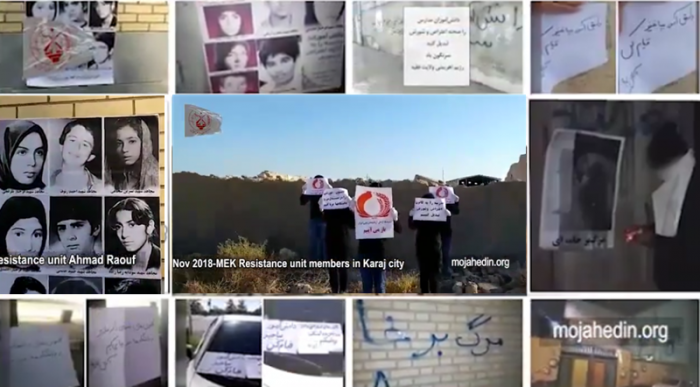 On Monday, members of the MEK’s Resistance Units took several actions against the Iranian regime in an escalation of the uprising currently taking place in Iran. MEK members set fire to the entrance of a Revolutionary Guards (IRGC) Basij base in Kermanshah in a dramatic show of rebellion against the repressive Iranian regime. The base is home to a number of the regime’s repressive Units.

MEK members set fire to posters of regime Supreme Leader Ali Khamenei in Qaemshahr. In Karaj, they raised the flag of the National Liberation Army, chanting, “Death to Khamenei, Hail to Rajavi!”

In Gachsaran, they put up graffiti saying, “Death to Khamenei” in public places. MEK members in Tehran and Shiraz publicly displayed posters of MEK members who were murdered by the Iranian regime. Resistance Units in Mashhad, Isfahan, and Amol put up graffiti and posters calling upon students to organize protests on their campuses.

These acts of resistance take place against a backdrop of widespread anti-regime protests that have rapidly spread throughout the country. Economic unrest, along with dissatisfaction with the mullahs’ mismanagement and corruption, has caused Iranians from all walks of life to take to the streets to demand regime change.

Protests and strikes have been taking place in multiple locations on a daily basis. The following are a few of the protests that have occurred over the past few days:

November 7
Truckers across #Iran are continuing their nationwide strike on this seventh consecutive day, demanding the release of their apprehended colleagues & protesting skyrocketing prices.#IranProtests pic.twitter.com/cn9vnfN0DA

The striking truckers are protesting low pay, the high price of spare parts and replacement tires, high fees, and poor working conditions. They are also demanding the release of their imprisoned colleagues who were arrested during the last round of strikes. During the last round of strikes, more than 200 truck drivers were arrested for participating in the strikes, and 17 of the arrested drivers were threatened with execution.

In Tehran, Open University students from the Medical Sciences Department rallied outside of the main building of the campus and outside of Parliament over unfair conditions at the school.

In Behbahan, young people held a protest at Friday prayers. The protesters were angry because they were not hired at the local refinery in favor of non-locals who would work for lower wages.

the scarcity of water and lack of access to water resources. The regime has dried the Zayanderud River by diverting its water away from the Isfahan region to factories controlled by the Revolutionary Guards. The diversion of water, along with record droughts, has destroyed the farms of once-prosperous Isfahan farmers and caused water shortages throughout the region.