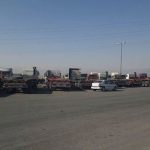 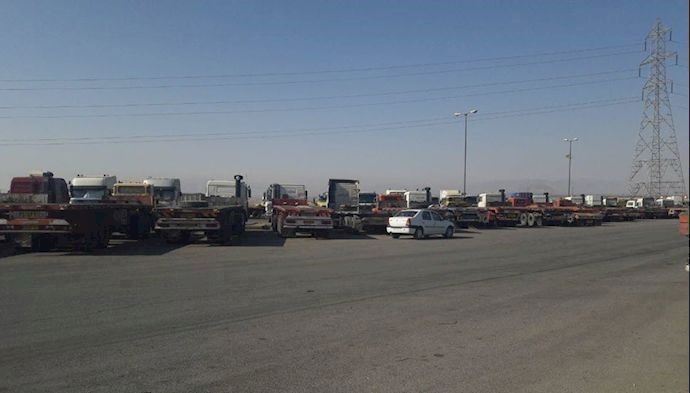 The truck drivers are on a nationwide strike again, this time demanding the release of their fellow colleagues arrested for the past rounds of strikes

Iran’s truckers have launched a new round of strikes in cities across the country. The latest round of strikes is the fourth to take place this year. The drivers hope to secure the release of colleagues who were arrested in previous strikes and to compel the regime to respond to their demands.

November 1
Shiraz, south-central #Iran
No trucks seen as drivers are protesting the apprehension of their colleagues.#IranianTruckersOnStrike pic.twitter.com/p33sGi3NPf

Truckers in cities across Iran are participating in the strikes. Reports from the MEK network indicate that strikes and rallies have taken place in Najaf Abad, Shahroud, Asaloyeh and Shadgan, among other cities.

Truckers in Najaf Abad in central Iran parked their trucks and went on strike after receiving a call to launch a nationwide protest that was posted on social media.

Drivers on the road to Isfahan report that the road is empty of heavy trucks, which means it is likely that truckers are heading the call to strike and joining the protest movement, a report from MEK network inside Iran indicates.

Oct 4
Courageous truck drivers across #Iran are persistent in their nationwide strike & demanding:

The state-run ILNA news agency reported that Iran’s poultry farms have already been affected by the strike. Because truck drivers refuse to carry goods, the farms have no chicken feed.

The Chairman of the Board of Directors of the Egg Laying Hens Union of Tehran said that the strike has led to severe shortages. “There are lots of goods in the ports but not enough trucks to transfer them to factories,” he said.

The last round of truck drivers’ strikes went on for 21 consecutive days and ended just last month. Security forces arrested more than 200 truck drivers for participating in the strikes and threatened to execute 17 of the arrested drivers.

The drivers garnered worldwide support from labor unions, including the International Transport Workers Federation (ITF) and the Teamsters, including others, who condemned the regime’s treatment of the drivers and their threats of execution.

According to reports, officials from the regime’s

Ministry of Road & Construction eventually agreed to concede to one of the truckers’ demands. The regime promised that transfer fees on loads within Iran will now be based on the ton/kilometers standard. It remains to be seen whether or not this promise will be honored. The regime has made concessions after previous strikes that have gone unfulfilled or partially fulfilled.

Iran’s truck drivers have lost weeks of pay due to the strikes. The truckers have been intimidated by the regime, arrested, and threatened with execution. Truck drivers make up an integral part of Iran’s infrastructure, but they struggle to pay their bills and to do their jobs safely. When they park their trucks, they do so because they have no other choice. The MEK supports the striking drivers in fighting for a fair labor system and a democratic country in which no worker must work in unfair conditions for poverty-level wages.