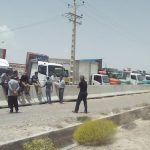 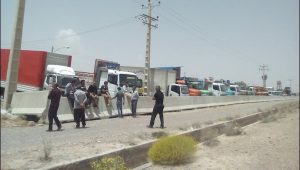 The truck driver protests escalated on their fourth day to include 177 cities, spread across 29 of the country’s provinces. The protests began on Tuesday, the 22nd of May when drivers in 70 of Iran’s cities turned off their engines in protest. By Friday the 25th of May, the demonstration had swelled as truck drivers, minicab drivers, and taxi drivers from other cities around the country joined the protests in earnest.

The protestors have been explicit in their demands. They want their wages to increase, retirement after 25-years of work, lower tariffs, and no competition from drivers working for the State Security Force.

Rising tariffs and freight charges have been a significant economic burden for Iran’s truck drivers. Iran’s economy is in turmoil and arbitrary charges from regime officials at terminals are strangling the logistics and shipping industry.

The Regime’s Efforts to Circumvent the Protests

As the protests swelled to 177 cities, the clerical regime tried to diminish the impact of the strike by using tankers owned by the Iranian Revolutionary Guards Corps (IRGC). However, their plans failed when protestors in several cities successfully blocked the tanker’s movements.

The regime also used threats in an attempt to break the strike. Workers from the National Oil Products Distribution Company in the province of Isfahan were told they would lose their jobs if they joined the strike. The drivers ignored the warnings and proceeded to join the strike.

Conflict erupted between fuel tank drivers and the regime’s agents. In Isfahan clashes occurred between the two sides, exacerbated by the regime’s threats against those involved in the strike.

The intimidation tactics are an indicator that the strikes have caused the regime concern. There are even signs of concessions. Tasnim, the state-run news agency, quoted Dariush Armani of Iran’s Road Maintenance and Transportation Organization. He said it was “reasonable” for the drivers to demand a pay increase, as the costs associated with transportation rose.

Iran Stands Behind the Strikers

Early in the protest, Maryam Rajavi, leader of the Iranian opposition, extended her support to the country’s brave truck drivers. The leader of the People’s Mujahedin Organisation of Iran (PMOI/MEK) gave the drivers her blessing and urged the people of Iran to stand with them in their struggle against the regime.

The National Council of Resistance of Iran (NCRI) also saluted the drivers, praising their resolve in the face of adversity and urging the Iranian public to support the protestors.