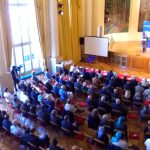 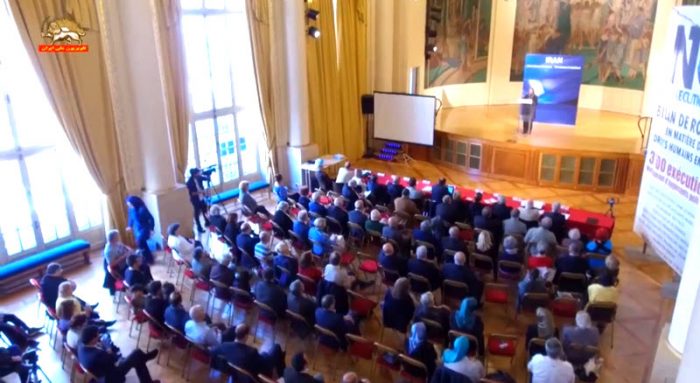 The Committee for the Support of Human Rights in Iran (CSDHI) held a conference in Paris on Wednesday, October 10th, in recognition of “World Day Against the Death Penalty.” The event was hosted by the Mayor of the 5th District of Paris and included speeches by politicians, dignitaries, and celebrities.

Mrs. Maryam Rajavi, President-elect of the National Council of Resistance of Iran (NCRI), spoke about the execution of 120,000 political prisoners, most of whom were MEK members, by the Iranian regime. Mrs. Rajavi said, “Their deaths are an everlasting disgrace for the mullahs who have built the pillars of their rule on blood.”

Mrs. Rajavi went on to say that the Iranian regime continues to use the death penalty to control and intimidate the Iranian people: “The death penalty is a tool for terrorizing the society and a significant instrument for preserving the regime. Both factions benefit from such endless savagery to prolong the regime’s rule,” she said.

I urge the world’s governments to stop their political and economic relations with the Iranian regime unless the regime ends torture and executions of prisoners and abandons its involvement in terrorism.
#NoToExecution #Iran pic.twitter.com/gkU72qBjyp

Mrs. Rajavi further called upon governments worldwide to condition all political and economic relations with the Iranian regime upon the cessation of torture and executions and the dismantling of their terrorist apparatus.

Florence Berthout, Mayor of the 5th District of Paris, lauded the NCRI’s struggle against the Iranian regime, quoting Victor Hugo. “The death penalty is the eternal sign of barbarism,” she quoted.

Jean-François Legaret, Mayor of the 1st District of Paris, paid tribute to the 30,000 political prisoners (mostly MEK members) executed during the 1988 Massacre in Iran. He emphasized that “these barbarities still continue” and went on to describe more recent attempts by the Iranian regime to silence the opposition, specifically the MEK. He mentioned the foiled terrorist attack on the annual NCRI gathering outside of Paris in June. “An Iranian minister sponsored the attack on Villepinte,” he said. “The Iranian regime is desperate and is trying to execute those outside, who stand in solidarity with the resistance in Iran.” Legaret stressed. “I call on the French government to launch an international investigation under the auspices of the UN to shed light on this state terrorism and the barbarities in Iran.”

Ingrid Betancourt, former FARC hostage and Colombian presidential candidate, also discussed the foiled terrorist plot on the NCRI gathering in her speech. She commended France for standing up to the Iranian regime despite its threats and pressure, and for demanding that the terrorists responsible for the attack face justice. She also called upon all of those who were present at the NCRI gathering to join her in filing a civil lawsuit in Belgium regarding the attack.

.@BetancourIngrid: We are survivors of an attack if the Belgian, German and French police had not thwarted the Iranian regime's plot aiming to eliminate @Maryam_Rajavi who opposes Islamist extremism #Iran#NoDeathPenalty #1988Massacre#HumanRights @JavaidRehman pic.twitter.com/J7Y9iq88Rh

Gilbert Mitterrand, the President of the Danielle Mitterrand Foundation, said, “Iran is, unfortunately, the world champion, the world record holder of executions.”

Gilbert Mitterrand: this year 2018 also coincides with the 30th anniversary of the #1988Massacre. We are not just paying tribute to the 30,000 victims. If mullahs continue with enough executions as they do, we’ll eventually end up with a 2nd 30,000.#NoDeathPenalty #HumanRights pic.twitter.com/KpVipVJ1uM

Jean-Pierre Béquet, former Mayor of Auvers- sur-Oise, congratulated the Iranian Resistance for including the abolition of the death penalty in its political platform. He also noted the positivity of the MEK members he had encountered. “When we went to Tirana to see the Ashrafians who had just arrived, with many wounded and maimed as a result of the regime’s attacks. These people had no hatred or revenge,” he said.

.@mkpbequet: #Iran continues to apply the death penalty #PeineDeMort day after day. I congratulate the Iranian Resistance 4 including the abolition of the death penalty in its programme despite suffering tens of thousands of victims#NoDeathPenalty#10Oct @MBachelet@JavaidRehman pic.twitter.com/FzJfGhIw3h

Jean-Pierre Muller, Mayor of Magny- en-Vexin said, “There are no moderates in Iran, only barbarians.” He proposed a day of solidarity between the people of France and the MEK.

Jean-Pierre Brard, Mayor of Montreuil also spoke about the foiled terrorist attack in June, emphasizing that “the attack not only targeted the resistance, but it also targeted our country. This embodies the hate seen in the mullahs.” Brard flatly rejected the idea that moderates exist in Iranian politics, saying, “A fascist is always a fascist.”

Bruno Macé, Mayor of Villiers-Adam, had also visited the MEK camp in Albania. “I saw in Tirana people who want to set up this secular democracy that we all aspire to.”