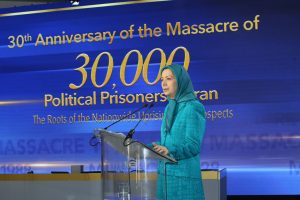 Maryam Rajavi, the president-elect of the Iranian opposition, speaking at a conference on the 30th anniversary of the 1988 Massacre of 30,000 political prisoners in Iran (mainly MEK activists).

On Saturday, Maryam Rajavi, President-elect of the National Council of Resistance of Iran (NCRI), gave a speech at a conference held by the Iranian communities commemorating the 30th anniversary of the 1988 massacre of 30,000 political prisoners, most of them MEK members, in Iran. The interactive conference was the result of a call to action issued by Mrs. Rajavi demanding that the international community investigate the massacre. It brought together participants from 20 capitals and major cities throughout Europe and North America in a call for justice for the victims of the massacre.

30th Anniversary of #1988Massacre in #Iran – The Roots of the Nationwide Uprising #Iranprotests https://t.co/8vb9t9Oiir

Mrs. Rajavi spoke about the regime’s efforts to prevent the victim’s stories from being told. She said: “The location of the graves is not known, and the list of the names is a secret. Speaking of their stories is forbidden, and inquiring about their fate is a crime under the mullahs’ rule.”

Mrs. Rajavi also spoke about the mass executions, which took place in 110 cities over the course of a few months in summer of 1988, saying that those cities have since turned into “hotbeds of revolt against the mullahs’ regime.” Thus, the heroes who gave their lives laid the foundation for the current uprising.

According to the information compiled and published by the People’s Mojahedin Organization of Iran in a book entitled, Crime Against Humanity, our sisters and brothers were executed in 110 Iranian cities in a matter of a few months in 1988. #1988Massacre #Iran pic.twitter.com/L49cfqSIBq

“People still remember their cause and why they sacrifice their lives. They died defending their principles to the end,” said Mrs. Rajavi.

For 3 decades, the int’l com. has been silent over the #1988massacre. The mullahs have continued with impunity to violate human rights in Iran, launch terrorist operations, and wage wars in the Middle East and other countries. Now, the time has come to end this silence.#Iran pic.twitter.com/qpLXfeMeQV

“They sacrificed their lives but spread the seeds of uprising and revolt,” she added.

Mrs. Rajavi also talked about the uprising currently taking place in Iran and its parallels to the 1988 massacre, saying: “The resistance units in Iran follow the footsteps of those men and women who said no to the regime and were massacred in 1988. The clerical regime is beleaguered by the eight-month-long uprisings, by the growing role of the PMOI and resistance units in organizing and leading the revolts, and by the consequences of a plummeting and drowning economy.”

The United Nations Security Council must prepare for the prosecution of the regime’s leaders, and those in charge of this massacre, and officials responsible for four decades of crimes against humanity.#1988Massacre #Iranhttps://t.co/yc8oSrxOtQ pic.twitter.com/WtM1Uj100i

She described the brutal methods by which the regime has attempted to suppress the protests: “Any legitimate protest or demonstration is repressed by the detention and torture of participants. In the uprisings last December and January, what were the protesters’ demands and what did they do wrong to be tortured to death? The bodies of a number of them were handed over to their families, telling them that they had committed suicide while in detention. The regime commits the crime and yet blames the victims of torture and massacre as culprits and criminals.”

Mrs. Rajavi described these as the actions of a tyrannical regime and encouraged the international community to shut down the regime’s embassies. She reiterated the call from the Iranian communities for international support in helping the Iranian people in their goal of regime change.