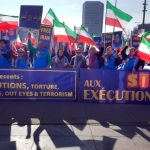 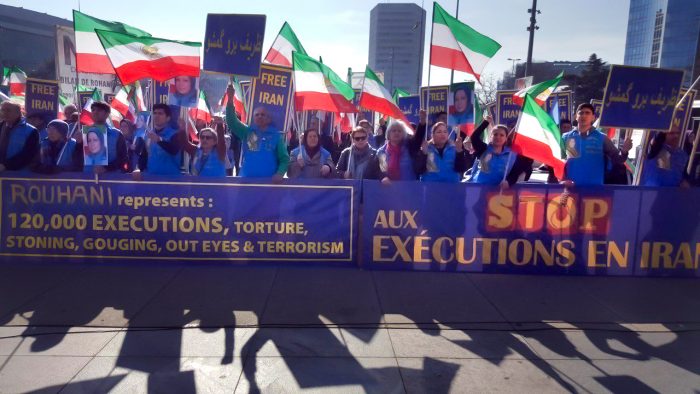 Protest Rally, Place des Nations, Geneva,26/02/2019 – Hundreds of Iranian exiles supporters of the Peoples Mojahedin Organization of Iran (MEK), carried Iranian flags and banners opposed to the Iranian regime in a rally on Tuesday February, 26,2019 in front of the UN Headquarters in Geneva to protest grave violations of human rights in Iran, particularly the 1988 massacre of more than 30,000 political prisoners (mainly MEK members).

The final day of the Free Iran Conference was dedicated to seeking justice for the 30,000 victims of the 1988 Massacre and their families. A number of dignitaries gave speeches on Monday, but the most memorable words came from survivors of the massacre. Their words are summarized below.

“In prison, they would not give milk and food for the kids, and my cellmates would provide their sugar rations to me to give something to my baby. There was no doctor or medication for the children. In the public ward, there were only 15 minutes of warm water every other day, which we had to use to give the children a bath. Many of these children had lost their parents,” Ms. Jokar continued.

“The torturers sought to break our will and force us to turn our backs on our struggle. I decided that I would not tell the enemy the name of the Mojahed. My friend Shekar was arrested with me, and she was executed in 1988 after suffering torture and the cage,” she stressed.

“I was imprisoned for 17 years. My crime was supporting the MEK. I witnessed many human rights violations. The 1988 massacre was a premeditated and well-planned crime. Some of the people who were directly involved in this crime still hold high positions of power. The regime has done everything in its power to hide its crime. It didn’t even tell the families of the victims the whereabouts of the burial places,” said Mr. Sahebjam.

“During the massacre, the judges only asked one question, in a short trial that lasted only a few minutes. They asked, “What are your charges?” Uttering the word ‘Mojahed’ was enough to seal the fate of the prisoner and send him to the gallows,” he added.

“The prisoners in the regime’s dungeons bore the scars of torture on their bodies. The 1988 massacre was an opportunity for the regime to hide the evidence of its horrible crimes. I personally know at least 20 families who have lost two of their children to the executioners of the regime,” he went on.

“Many of the prisoners were aged 14,15 and 16 when they were arrested. These people were later executed by the regime,” he stressed.

“During the 1988 massacre, dozens of MEK supporters had served their sentence. However, they were kept in prison because they would not repent their support for the MEK. They were executed in 1988 because of their dedication to freedom and human values,” Sahebjam concluded.

“I spent 11 years in prison, five of those years in solitary confinement. During the 1988 massacre, I was hospitalized because of torture. I was unconscious in the clinic when they called my name for execution, and this is how I survived,” said Mr. Naderi.

“After the executions, when you were taken to the cells, they asked for your name and checked in a notebook. In the notebook, all the names were crossed, which meant they were executed,” he explained.

“In the beginning, they said nothing of the executions, claiming the prisoners were going for family visits. In many smaller cities, not even a single person survived to tell the story of the massacre,” Mr. Naderi added.

“In prison, I was severely tortured. After eight months of torture, I and five other prisoners were taken to a mullah who said we were enemies of God and would be executed that night. They took us to the place of execution. They tied our hands and we heard the guns being loaded. They fired, but they show a meter above our heads. We suffered a traumatic experience. One of the prisoners fainted and another lost his eyesight,” he said.

“The 1988 massacre was planned from two years before. However, the massacre continues to this day. We must stop this,” Mr. Naderi concluded.

“I spent 10 years in the regime’s prisons. Many of my friends were teenagers when they were arrested. They spent many years in prison and were finally executed. People who had served their sentences and their families were waiting for them. However, they never got to see them,” said Mr. Royaie.

“One of my friends was executed five years after his sentence was finished. He was taken to the gallows just as he defended the name of Mojahed. Many of the prisoners’ families died after hearing that their loved ones were executed. The father of one of my friends had a cardiac arrest when he heard about his son’s execution. So you could say the regime even executed our families,” he said.

“Some of these families are still staring at the pictures of their loved ones and crying after 30 years. Some of the parents lost their sanity when their children were executed,” Mr. Royaie added.

“The regime even executed the disabled and handicapped. Yet these prisoners stood tall when they went to the gallows. One of my friends had lost his mentality due to the tortures. However, when they took him to the judge, he stood tall and said, ‘I’m a Mojahed.’ He was executed,” he recalled.

“The 1988 massacre was a national disaster, but it is also the pride of our nation. Today, people who weren’t even born then are calling for justice. The members of the 1988 ‘Death Commissions’ are members of the government today,” Mr. Royaie said.

“When I think about those brave prisoners, I am humbled. With the justice movement, I feel that they’re here with us, in Ashraf 3,” he concluded.