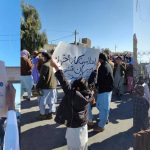 Iran: Protests continue in Zahedan, as the uprising enters its fourth month

Written by Mohsen Aboutalebi on December 19, 2022. Posted in NEWS 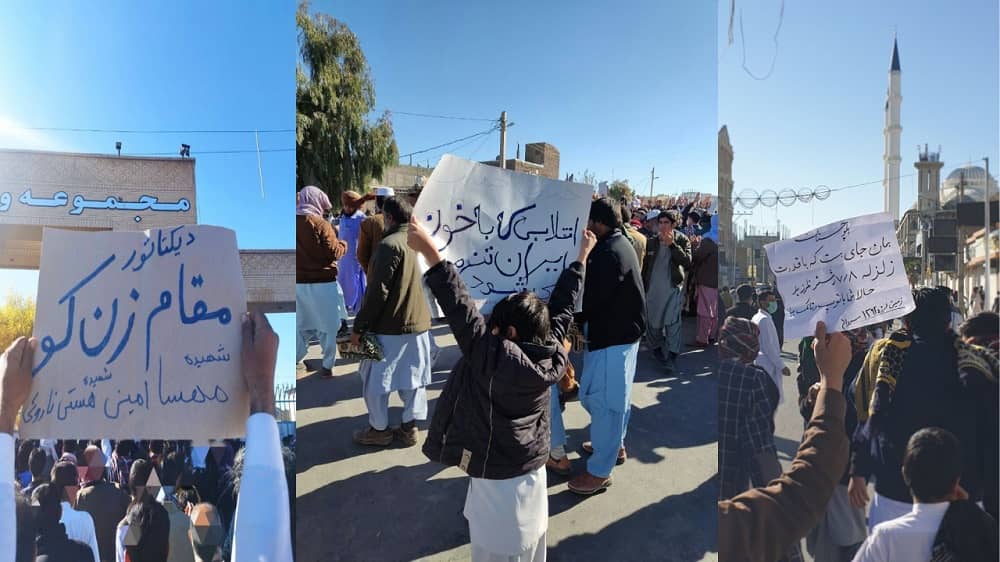 In the fourth month of the uprising, on December 16, thousands of people demonstrated in Zahedan after Friday prayers, chanting anti-regime slogans such as, “Death to Khamenei,” and “Death to IRGC.”

“This year will be a year of sacrifice; Seyyed Ali (Khamenei) will be overthrown.” “Death to clerical rule,” “Death to child-killer rulers,” and “For every fallen person, a thousand would rise,” chanted the brave women of Zahedan. Demonstrators held placards that read, “Dictator! What happened to women’s status?” in reference to the regime’s expulsion from the UN Commission on the Status of Women (CSW).

Students demonstrated in Kermanshah and in the 7th-day ceremony commemorating Shadman Ahmadi’s martyrdom was held in Dehgolan, with participants chanting “Death to Khamenei.”

Dr. Aida Rostami’s funeral service was held in Gorgan on Friday. He was a resident of Tehran’s Ekbatan township who secretly treated those injured in suppressive agent attacks. The regime’s security agencies tracked him down, and consequently, he disappeared after finishing his shift at Chamran Hospital on Monday, December 12. His family had to retrieve his body from the morgue the next day.  The cause of death was listed as “collision with a hard object” in the forensic medical certificate.

The 40th anniversary of Ali Rozbahani’s martyrdom was commemorated in Tehran at the Behesht Zahra cemetery. Participants paid tribute to him with slogans like “We pledge to the martyrs, Ali, Mohsen, and other comrades, to fight on” and “For every fallen person, a thousand would rise.” His family vowed to continue Ali’s path until the end.

The 40th day of the martyrdom of Mehdi Hazrati, a 17-year-old teenager, was held in Karaj’s Behesht Ali cemetery. The regime’s security organs prevented the martyr’s family from attending the ceremony.

The body of martyr Donya Farhadi, a 21-year-old girl from Izeh, was discovered on the bank of the Karun River in Ahvaz on Thursday. She was a student activist studying architecture in Ahvaz when she was abducted by suppressive forces 9 days ago.

Despite the heavy presence of the suppressive agents, Tehran residents went to Mohsen Shekari’s grave in the Behesht Zahra cemetery on Thursday and placed flowers there.

Last night, young people in Tehran demonstrated in Sattarkhan, Qolhak, Parand, and Chitgar townships, chanting, “This year is a year of sacrifice, Seyyed Ali (Khamenei) will be overthrown.” “Death to the principle of the absolute rule of clergy,” “Poverty, corruption, high prices, we are going for the regime’s overthrow,” “We pledge to the blood of our comrades – we will stand until the end” and “This is the final warning, the entire regime is the target.”

Iranian opposition President-elect Maryam Rajavi of the National Council of Resistance of Iran (NCRI), saluted the Baluch compatriots, especially the brave pioneering women of Zahedan, who in the fourth month of the uprising, stressed protesting until the regime’s overthrow by seeking justice for the martyrs and chanting “For every fallen person, one thousand would rise,” and said, all Iranians of various ethnicities including Kurdish, Turkish, Lor, Arab, Baluchi, and Fars are resolute in their determination to destroy the clerical rule.

Our Baluch compatriots, esp. the brave women of #Zahedan, reiterated their call for justice for the martyrs in the 4th month of #IranProtests With chants of “Behind every one killed, there are 1000” they vowed to continue #IranRevolution until the regime is overthrown. pic.twitter.com/1cMpiE4JT3