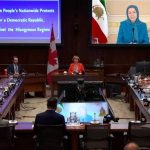 NCRI meeting with Canadian lawmakers in support of the Iranian uprising

Written by Esmail Mohades on November 29, 2022. Posted in NEWS 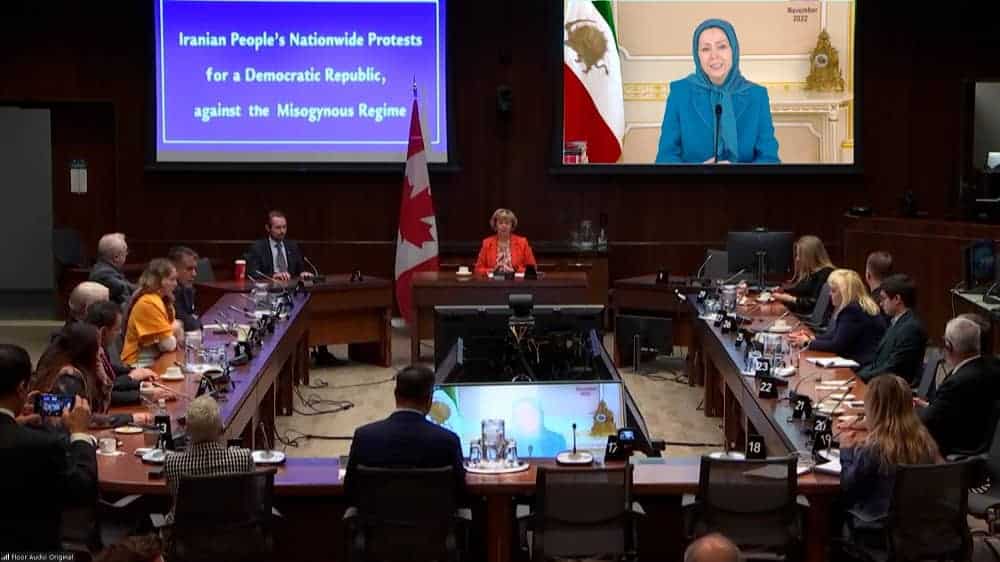 Mrs. Maryam Rajavi: “The balance of power in Iran has shifted between the people and the Resistance on one side and the mullahs’ regime on the other. Iran is on the verge of a major transformation.”

On Tuesday, November 22, a bipartisan panel of distinguished Canadian lawmakers gathered in support of the Iranian people’s nationwide uprising. They also backed the organized Resistance movement, which has played a key role in what many regards as Iran’s democratic revolution. Mrs. Maryam Rajavi, the president-elect of the National Council of Resistance of Iran (NCRI), was the event’s keynote speaker, shedding light on the current state of Iran’s nationwide uprising and what Western democracies can do to support the Iranian people’s quest for freedom.

“This uprising did not happen overnight. It is the result of 43 years of repression. Women have been at the forefront of this uprising because they have faced dual oppression,” Mrs. Rajavi said, highlighting the role of Iranian women in the nationwide protests.

Mrs. Rajavi also mentioned the regime’s desperate efforts to undermine and smear the NCRI and its pivotal member, thePeople’s Mojahedin of Iran (PMOI/MEK).

“In addition to domestic repression, the regime has launched an international and virtual disinformation campaign against its main opposition. The regime’s agents operate under various guises, including that of a critic, in order to justify further repression and executions of opponents,” she added.

Mrs. Rajavi urged Canadian lawmakers to take concrete steps to ensure that their government recognizes the Iranian people’s right to self-defense and their struggle to destabilize the regime. Mrs. Rajavi also demanded that the Revolutionary Guards (IRGC) and the regime’s Ministry of Intelligence and Security (MOIS) be designated as terrorist organizations and that the regime’s agents be expelled from Canada. Mrs. Judy Sgro, a senior Member of Parliament and former Minister of Immigration, presided over the conference in her opening remarks, expressed gratitude to Mrs. Rajavi for her remarks, and reiterated her support for the Iranian Resistance and the ongoing nationwide uprising.

Today, Iran is going through a critical moment in its history.
The Iranian people’s desire, especially women, is highlighted in their slogans. They want to overthrow the entire regime.#FreeIran #WomenForce4Change pic.twitter.com/k7Z1ePHiXE

Following Mrs. Sgro, MP Michael Cooper spoke at the event. He thanked Mrs. Rajavi for providing an in-depth analysis of Iran’s current situation. “The Canadian government has taken some important steps, but there is still work to be done. Among them is designating the IRGC as a terrorist organization and ensuring that the regime’s agents in Canada are no longer welcome, but are deported and their assets are seized,” he added, echoing Mrs. Rajavi’s call to action.

“More broadly, we must work with our democratic allies to put maximum pressure on the regime to support resistance and document the massive crimes being committed against the Iranian people,” he added.

The next spear of the event on Tuesday was MP David Epp. Mr. Epp described the current Iranian resistance as “inspiring,” and shared his experience visiting Ashraf 3, the MEK’s compound in Albania.

On November 16, in the city of #Izeh in southwest of Iran, the regime's agents opened fire on protesters, killing at least ten people, including three under-18 that a ten-year-old boy, #Kian, was among them. pic.twitter.com/zTfA82PDgf

Mrs. Andréanne Larouche, MP, was also a speaker at the November 22 conference. While supporting the struggle for freedom of Iranian women, she stated that she was the first member of the House of Commons to table a motion in support of women’s rights in Iran, which was widely supported. “It is important for me to be in solidarity with you,” she said. We are on your side and will keep a close eye on the situation.”