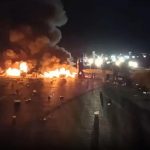 Written by Esmail Mohades on November 6, 2022. Posted in NEWS 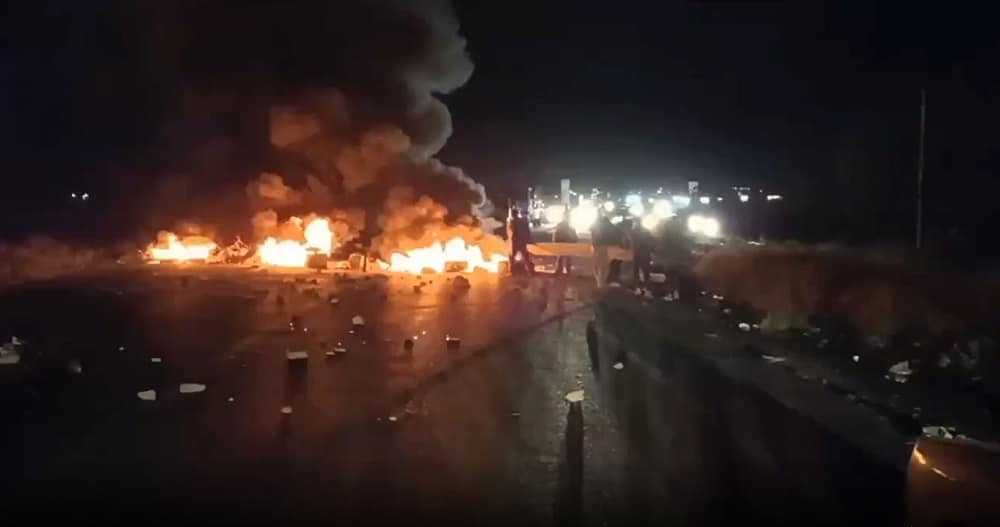 November 4 – West Azerbaijan Province northwest Iran Locals are blocking the Bukan-Miandoab highway as they continue the nationwide protests against the regime on the 48th night of the uprising.

On Friday night, November 4, the 50th night of the uprising, Tehran, Tabriz, Isfahan, Mashhad, Hamedan, Ramsar, Sanandaj, Bukan, Marivan, Saqqez, Khash, and many other cities saw nightly demonstrations. By setting fire to things and blocking roads, the youth resisted the suppressive forces’ brutal assaults. “Death to the dictator” was chanted by Tehran residents during night-time demonstrations in a number of different neighborhoods, including Amirabad, Chitgar, Tehranpars, South Jannatabad, and Salsabil.

The youths engaged in combat with the forces of the regime in the Chitgar district, who opened fire on civilian homes. While chanting “We will fight, we will die, we will take back Iran” in the Vali-e Asr subway, young people set fire to a sizable Khamenei banner on Dowlat Street. People in Tehranpars were targeted by repressive forces.

On Wednesday morning, Sanandaj residents began protesting in various parts of the city. They persisted in their demonstrations and altercations with suppressive agents until late at night. Other parts of the city, such as Imam Reza Square, Kamkar Street, Dr. Hosseini Boulevard, Molavi Township, Mehr Maskan, Taftan, and Kargar, saw protesters block off streets by setting them on fire and seizing control of others. Security personnel broke into homes, destroyed private property, and shot at them in various areas of Sanandaj, particularly in the Hajiabad neighborhood. The youths and security personnel engaged in conflict in a number of locations, including Molavi, Taftan, Kamkar, and Kargar.

November 2 – Sanandaj, western #Iran
Locals are chanting "Death to the dictator!" and taking control of their streets while continuing the nationwide protests against the regime on the 48th day of the uprising.#IranRevolution2022#آزادی_آزادی_آزادی pic.twitter.com/YGqDimXcyp

Numerous other cities, such as Saqqez, Bukan, Marivan, Isfahan, Tabriz, Shush, Karaj, Shiraz, Astara, etc., saw nightly protests, fires being lit, and roadblocks being erected. The Mahabad highway was blocked by youths in Bukan. Every evening, protesters in Isfahan gathered in Charbagh and chanted, “Death to the Supreme Leader after many long years of crimes.” “The people of Azerbaijan will not tolerate humiliation,” shouted locals in Tabriz.

A large banner bearing Khamenei’s image was set on fire in Ramsar and Vakil Abad in Mashhad by rebellious youths who also attacked the Relief Committee in District 2 of Hamedan. They destroyed the Basij base and the IRGC Ground Force Rangers Brigade sign in Shush.

A large crowd chanted, “This year is a year of sacrifice, Seyyed Ali (Khamenei) will be overthrown,” “Basij force, this is the end of you,” and “Mullahs must get lost” on Wednesday morning, the 40th day of Hananeh Kia’s martyrdom ceremony in Nowshahr. People standing in front of the martyr’s family’s home came under fire from repressive forces.

November 2 – Tabriz, northwest #Iran
Students of Madani University chanting:
"With or without the hijab, we're heading for a revolution!"#IranRevolution#آزادی_آزادی_آزادیpic.twitter.com/jpfmFGw3lc

Rudbar’s schoolchildren demonstrated in the street while yelling “Death to the dictator.” Agents in plainclothes attacked the students and detained some of them, but the protesters attacked and secured their release.