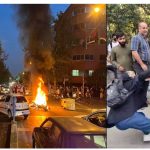 Written by Amineh Qaraee on October 3, 2022. Posted in NEWS 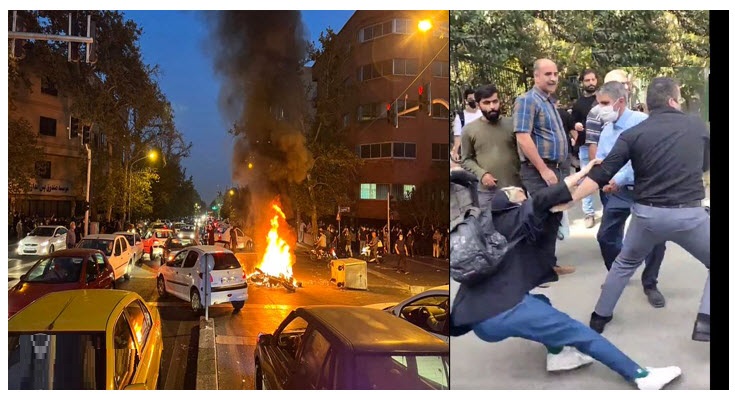 Many individuals, including young people, are destroying the propaganda and other symbols of the regime that have been placed throughout the cities of Iran after learning from the Resistance Units.

The bravery and fearlessness with which the people, particularly the youth, have rebelled against the forces of the regime are one of the main features of the recent protests in Iran. Iranian women have demonstrated exemplary behavior and unwaveringness. They have realized that the only way to free Iran from the Iranian regime is to demonstrate their resistance to its rule at all costs, overcome their fears, and reclaim the destiny that has been stolen from them for decades.

In numerous videos posted on social media, protesters can be seen pursuing and attacking the forces of the regime despite the fact that they are unarmed. The mullahs and repressive forces of the regime must now fear the repercussions of their decades-long actions. Reaching this stage in the struggle of the people against the oppressive regime that has ruled Iran through coercion, repression, terror, and violence is a significant victory. When fear tactics fail, the inevitable result is the demise of the mullahs’ tyranny and totalitarianism.

The People’s Mojahedin of Iran (PMOI/MEK) Resistance units have demonstrated their strength over the past six years by making significant sacrifices, fighting valiantly, and never giving up. Members and supporters of the group put their lives in danger to pave the way for a new uprising and inspire the Iranian people to oppose the regime.

Thousands, if not hundreds of thousands, of Resistance Units, are currently being formed across the nation and in every city. People have learned from their mistakes, and by employing new strategies, they are defeating the regime’s forces. As they divide and exhaust the regime’s forces, they have control of the streets and alleys.

The state Tabnak newspaper reported on September 24 that “There are organized entities that destroy places, burn them and escape, and repeat the same on other places, which shows that they are organized who commit these actions.

“I want to tell you that the events that happened in these two days are unprecedented,” Mohsen Mahdian, a member of the regime’s revolutionary Guards (IRGC), said, stunned and terrified by the blazing development of the ongoing uprising. “These protests were unprecedented in the last 40 years. Why unprecedented, because there has never been a period of protests in such a way that you can see violence and disturbance from the first hour.”

“The real story is not the hijab, the story is not about the morality police or the death of Mahsa, they are targeting the system,” he continued. “And this is obvious in their slogans if you analyze them logically over the past two days. You will understand that the slogans are clearly saying that our problem is not the issues that have been said, it is the principle of the rule.”

September 30 – Ardabil, northwest #Iran
Locals are protesting in the streets and forcing the regime's security forces to flee.#IranProtests2022 #MahsaAmini#مهسا_امینی pic.twitter.com/vm1yRoNEX6