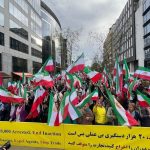 Written by Esmail Mohades on October 25, 2022. Posted in NEWS 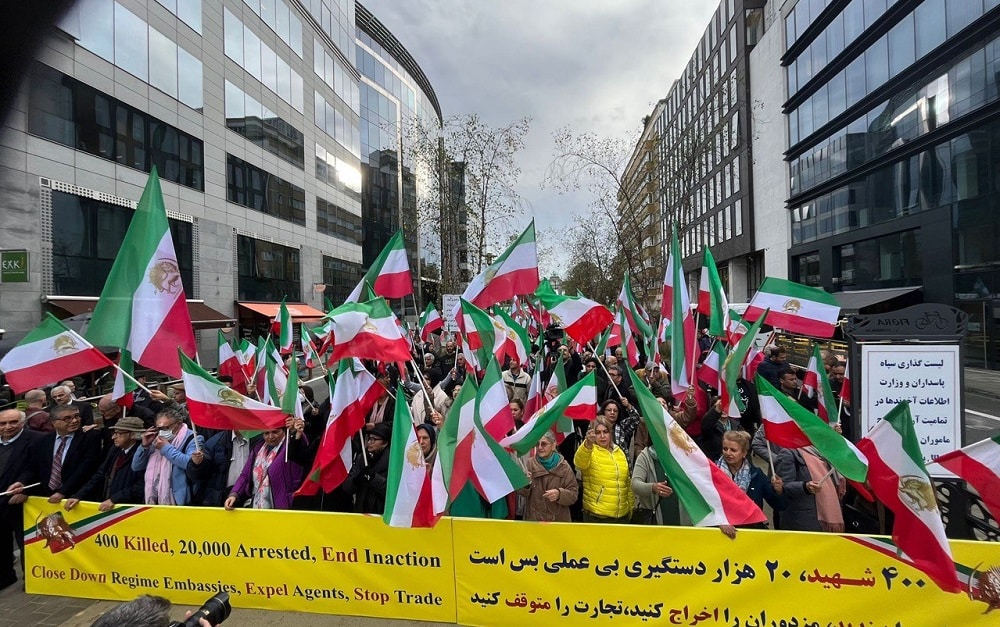 The Iranian diaspora and Iranian Resistance followers in Belgium held a rally on October 21 outside the European Union’s headquarters in support of the country’s widespread protests, while EU leaders were meeting in Brussels.

Iranians demanded that the European Union designate the entire Islamic Revolutionary Guard Corps (IRGC) and the Ministry of Intelligence and Security (MOIS) as terrorist organizations, expel their agents and operatives from the EU, and revoke their passports.

Mrs. Maryam Rajavi, President-elect of the National Council of Resistance of Iran (NCRI), said in a video message to the rally, “on its 36th day, the magnificent Iran uprising continues to shake the pillars of Khamenei’s oppression, crimes, and injustice. Your rally today is now sending a powerful message to the world. The message of the Iran uprising to the leaders of the 27 European Union member states, presently meeting in Brussels, and to all the world leaders is that the mullahs’ era has ended”. She added, “the era for an international Iran policy based on engaging the clerical regime has also ended. Now, the people of Iran, the Iran uprising, and the Iranian Resistance are the ones who will have the final say. Recognize the Iranian people’s struggle to overthrow the regime.”

The European Union Leaders’ Summit, was held in Brussels on October 20 21with the prospect to impose the second round of sanctions on the clerical regime. Previously, in response to the regime’s brutal repression of Iranian people’s demonstrations, the European Union Foreign Ministers met on Monday, October 17, and sanctioned 11 individuals and four institutions.

While Iranians in Brussels protested in solidarity with the families of political prisoners and detained protesters who are holding a sit-in outside Tehran’s Evin Prison, they urged European leaders to hold the clerical regime accountable for the recent bloodbath in Iranian prisons.

To the courageous students &youths:
Do not get tired, tire the enemy
Do not despair in the face of crimes. As you have during the past several weeks in #IranProtests &uprising
spread hope &faith in victory everywhere
Resist &fight this is the key to your victory#IranRevolution

On October 15, dozens of people were killed and injured when the IRGC’s Special Units attacked the notorious Evin prison. Following the tragic massacre, a similar attack occurred at Ghezelhesar Prison in Karaj. Prior to that, prison guards set fire to Lakan Prison in Rasht, northwestern Iran, killing ten inmates.

The Iranians in Shuman Square in front of the EU headquarters also supported Mrs. Maryam Rajavi’s call for the international community to send a delegation to prisons for investigation.

“Today, due to the efforts and perseverance of the Resistance Units, the regime has been unable to silence the Iranian people and exterminate the uprisings…” said Abolghassem Rezaee, deputy-secretary of the NCRI, who lost six members of his family during the Shah and Mullahs’ dictatorship. “As the sixth week of the uprising begins, we pledge to liberate the people of Iran and overthrow the ruling regime, and we will not rest until we establish a democratic republic based on the separation of religion and state,” he added.

Mr. Marc-Jean Ghyssels, a well-known Belgian lawmaker, praised the Iranian-European community’s solidarity activities with Iranian protesters in his speech. “The representatives of the Belgian people will be with you and the Iranian Resistance until the victory of the Iranian people’s uprising,” he said. 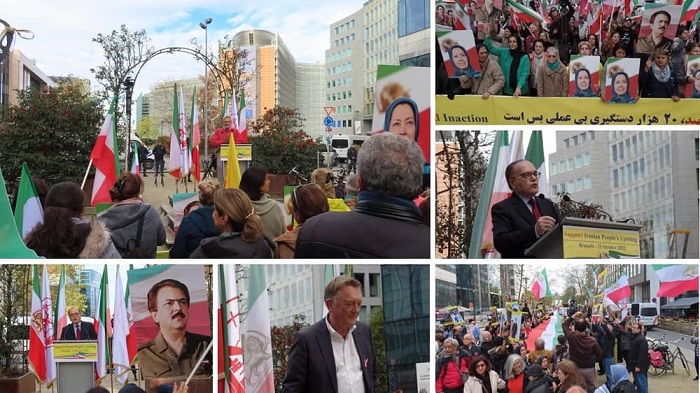 Abolghassem Rezaee, deputy-secretary of the NCRI, lost six members of his family during the Shah and Mullahs’ dictatorship. “As the sixth week of the uprising begins, we pledge to liberate the people of Iran and overthrow the ruling regime, and we will not rest until we establish a democratic republic based on the separation of religion and state,” he added.

Another speaker at the rally was Mr. Serge de Patoul, a former Belgian MP. He expressed his solidarity and support for the Iranian people’s uprising against Iran’s religious dictatorship.

Supporters of the NCRI in Belgium reiterated their desire for a democratic Iran. They rejected any dictatorship by repeating the same slogan as demonstrators in Iran: “Death to the oppressor, whether the Shah or the leader (Khamenei).”