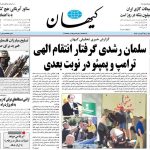 Written by Esmail Mohades on August 20, 2022. Posted in NEWS 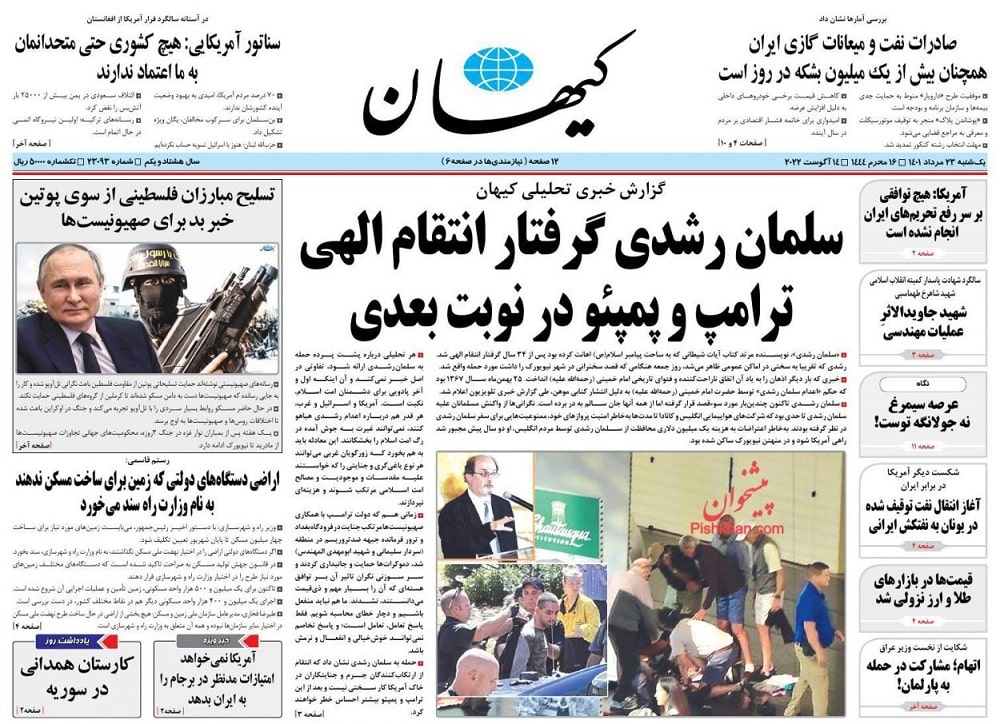 Front page of Khamenei’s mouthpiece, the Kayhan daily: Salman Rushdie caught in divine revenge, Trump and Pompeo in the next turn.

On Monday, the Iranian regime’s Foreign Ministry issued the regime’s first official statement regarding the attempted murder of Salman Rushdie, simultaneously disclaiming all guilt and asserting that it was wholly justified. The founder of the regime, Ruhollah Khomeini, issued a fatwa in 1989 that called for the author to be declared an apostate and an enemy of God and called for his execution.

Rushdie was stabbed multiple times after taking the stage at a literary event in Western New York where he was scheduled to deliver a speech on Friday. Several early accounts of the attack stated that a motive was not known, while others pointed to the Iranian regime’s long-standing incitement against Rushdie as the most plausible justification. While the veracity of this claim is debatable, numerous reports also asserted that the regime had backed away from Khomeini’s fatwa in recent years.

The contents of the fatwa were reiterated in 2005 by Khomeini’s successor Ali Khamenei, who continues to hold the position of supreme leadership today. He noted that Rushdie’s murder would be justified under the regime’s official, fundamentalist interpretation of Islamic law. At a Friday prayer gathering in Tehran in 2014, Ahmad Khatami, one of Khamenei’s trusted advisors and a member of the influential Assembly of Experts, said, “This fatwa is still fresh among Muslims, and many believers are looking for an opportunity to implement Imam’s order.”

Even more recent mentions of the fatwa have been noted in the regime-supporting Iranian state media. Some of those references have connected the official, ongoing death threat against Salman Rushdie to less formal but possibly just as serious threats against Western lawmakers, members of Iran’s pro-democracy Resistance movement, and other individuals seen as potential threats to the regime.

The head of the Islamic Revolutionary Guard Corps’ Quds Force foreign special operations division made threats against former US administration officials in remarks published on December 31, 2020, in response to a drone strike that had killed his predecessor the year before. The targets of that threat, Esmail Qaani said, “should learn how to live a secret lifestyle like Salman Rushdie because the Islamic Republic will avenge Qassem Soleimani’s death.”

Clerical Regime Welcomed and Promoted the Attack on Salman Rushdie Based on Khomeini and Khamenei’s Fatwa #Iran #SalmanRushdie https://t.co/cUzyLycxP6

Hadi Matar, the assailant, was born in Lebanon and posted on social media with praise for the IRGC, whose operations in that nation effectively gave rise to the terrorist organization Hezbollah. He was apprehended just two days after the US Department of Justice made public information about its case against an IRGC agent named Shahram Poursafi, who had reportedly spent months trying to gather resources inside the US to kill former US National Security Advisor John Bolton as part of a larger retaliation scheme for the killing of Soleimani.

James Phillips of the Heritage Foundation argued that new information about the Bolton assassination plot was evidence that the Iranian regime poses a “lethal threat” to the United States and its allies and that this threat needs to be addressed in an opinion piece published by Fox News. The Rushdie attack was later referred to as a “wake-up call for the West” in relation to Iranian terrorist threats and their relevance to the contentious negotiations that aim to restore the 2015 Iran nuclear deal by Rishi Sunak, one of the two candidates for prime minister in the United Kingdom.

Nasser Kanani, a spokesman for the regime’s Foreign Ministry, rejected the idea of denouncing the attacker or the attack itself even though he insisted that Tehran “categorically denies” any involvement with the would-be assassin and that “no one has any right to accuse the Islamic Republic of Iran.”

Before asserting that the author’s alleged blasphemy was an “insult against followers of all religions,” which had enraged “millions of people in Arab, Islamic, and non-Islamic countries,” Kanani said, “We don’t consider anyone deserving reproach, blame, or even condemnation, except for (Rushdie) himself and his supporters.”

By claiming that Rushdie had “exposed himself to popular anger and fury through insulting the sacredness of Islam,” Kanani openly defended Rushdie’s attempted murder.